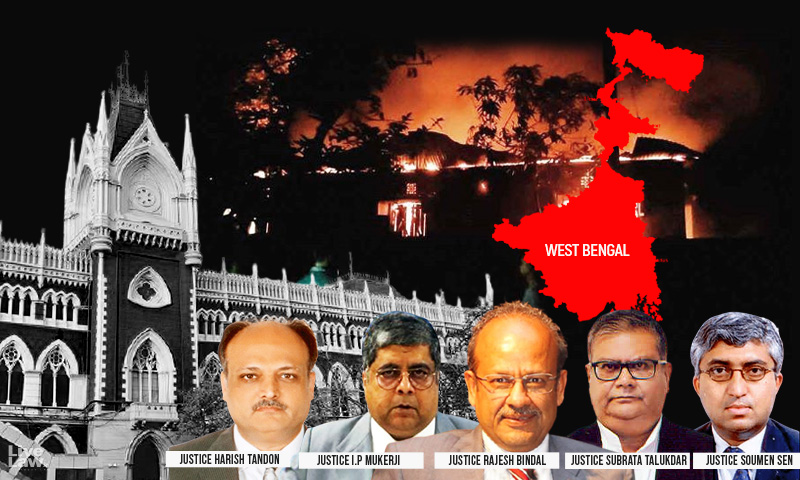 A five-Judge Bench of the Calcutta High Court has constituted a three-member Committee to enable persons displaced during the West Bengal post poll violence to return to their homes peacefully. "Law and order is the domain of State and it is duty bound to see that people can return to their homes. It is the paramount role of the Government, which has no political garment so far as rule...

A five-Judge Bench of the Calcutta High Court has constituted a three-member Committee to enable persons displaced during the West Bengal post poll violence to return to their homes peacefully.

"Law and order is the domain of State and it is duty bound to see that people can return to their homes. It is the paramount role of the Government, which has no political garment so far as rule of law is concerned," the Court said.

It has ordered that the displaced persons will communicate their grievance on the official Email ID of the West Bengal State Legal Services Authority. After receipt of details of aforesaid persons, the Committee shall coordinate with local police stations and ensure that people may return.

"Aforesaid persons are entitled to enter and live in their houses peacefully. All concerned Police Stations will coordinate with the Committee which shall submit its report to this Court about the steps taken for the aforesaid process," the Bench ordered.

The order has been passed by a Bench comprising of Acting Chief Justice Rajesh Bindal, Justices IP Mukerji, Harish Tandon, Soumen Sen and Subrata Talukdar on a petition filed by Advocate Priyanka Tibrewal who alleged that more than 200 persons got displaced due to the violence and that they are now unable to return to their homes due to fear of backlash.

During the hearing, Advocate General Kishore Dutta disputed the veracity of the affidavits filed by the Petitioners claiming that they are not being permitted to return. He stated that no violence has taken place in the State after May 9. He claimed that many people have returned to their workplaces and some have not returned due to imposition of Lockdown.

He also questioned as to how over 100 people had field sworn affidavits on the same day and urged that the Commissioner of Oath be summoned.

At this juncture, the Bench pulled by the AG for raining technical issues and asked him to focus on the larger question.

"Are you are not bothered that people who are out of their homes? Violence may not have occurred after May 9 but people have not been able to return to their homes…There should be a sense of security among people that they can return peacefully. You have a robust administration- collect the data from all Police stations and present before us," the Bench orally remarked.

The AG then urged the Court to not allow Tiberwal in the rehabilitation process due to her political affiliations.

Tiberwal on the other hand contended that she is ready to assist the displaced population in returning to their homes and submitted that she merely seeks the support of one Police officer to make sure that the movement takes place peacefully.

"This case cannot be decided on the basis of affidavit vs affidavit. People have a right to go back to their houses and live there peacefully," the Bench remarked while stating its inclination to form an independent Committee.

The Court also noted that there may be people who might seek to take advantage of the situation and try to take possession of properties they have no right to. Therefore, it has asked the displaced persons to carry their identification proofs and the Committee has been directed to deal with the situation on a case to case basis.

The matter is now kept for June 4. In the meantime, State is granted liberty to file affidavits in opposition in other pending petitions.

A division bench had referred the matter to the 5-judge bench having regard to the importance of issues relating to life and liberty of the citizens.

Last week, the Supreme Court had issued notice on a PIL seeking compensation and rehabilitation of the victims of the alleged state sponsored violence which took place in West Bengal after the declaration of assembly election results on May 2. The Supreme Court has also asked the West Bengal Government to file a counter-affidavit to a petition which seeks CBI/SIT probe into the killings of two BJP workers, allegedly at the behest of Trinamool leaders.