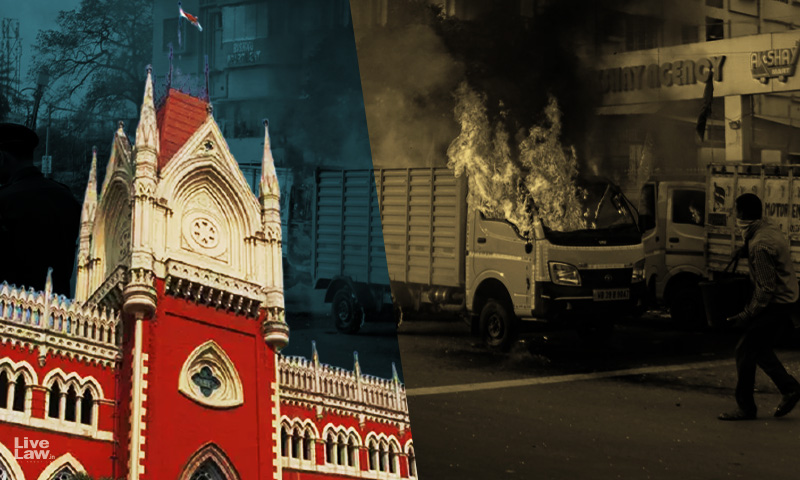 The Calcutta High Court on Thursday granted time to the West Bengal state government till July 26 to submit a reply to the final report submitted by the Committee of the National Human Rights Commission (NHRC). The matter is slated to be heard next on July 28 at 11am. The Court also took on record the autopsy report of deceased BJP worker Abhijit Sarkar and the DVD containing the video recording of the autopsy.

The 5 judge Bench comprising Acting Chief Justice Rajesh Bindal and Justices I.P Mukerji, Harish Tandon, Soumen Sen and Subrata Talukdar observed on Thursday that a 'final opportunity' is being granted to the State government to file its affidavit in response to the NHRC report and that no further extension of time shall be granted.

During the hearing on Thursday, senior counsel Kapil Sibal had apprised the Court that Annexure I, Volume 8 of the NHRC report had not been submitted to the State government. Thus, he sought leave of the Court to permit the disclosure of Annexure I so as to enable him to file a reply.

In response, Advocate Subir Sanyal appearing for the NHRC informed the Court that the concerned annexure contains the names of rape victims and details of spot investigation conducted by the NHRC pertaining to the rape allegations. As a result, the Annexure had not been submitted to protect the interests of the rape victims.

Advocate Sanyal further remarked 'we have to consider that the State police authorities are threatening the victims. It will jeopardise their safety if Annexure I is made public."

In response, Senior Advocate Kapil Sibal, appearing for the SPs of police requested the Court to grant the submission of Annexure I with the names of the victims redacted in order to protect their identities.

Taking note of the concern raised, the Bench had enquired from senior advocates Kapil Sibal and Abhishek Manu Singhvi as to why the aforementioned affidavit was required when they had access to the master database containing the details of all the complaints of the victims including their contact details. As a result, the Bench observed that it would not permit the disclosure of Annexure I as of now till a determination has been made by the Bench as to its contents.

"We reject the plea of the State of West Bengal for copy of Annexure I which is part of the NHRC report. This is being rejected because it holds names of Sexual Assault victims", the bench said in the order. The Bench further observed that the entire NHRC report with the inclusion of Annexure I would be submitted only to the investigating agency which will be tasked with the responsibility of investigating the matter.

Constitution of an independent investigating agency/SIT:

During the hearing on Thursday, senior counsel Mahesh Jethmalani, appearing for one of the petitioners, contended that the constitution of an independent investigating agency was the need of the hour. Accordingly, he remarked,

"Today the State whose inaction has triggered the entire litigation wants to now investigate on their own. An independent agency is called for. The State has been complicit in many instances"

Senior Advocate Jethmalani also pointed out that the synopsis of the NHRC report clearly indicate that the State police authorities have been complicit in threatening the victims. As a result, the police cannot be trusted with the identities of the rape victims as mentioned in Annexure I of the report.

Addressing the contentions raised, the Bench observed, "today the State is asking for a role which does not belong to it. The proceedings have become adversarial because the State has failed to investigate properly".

Further, Advocate J. Sai Deepak appearing for one of the petitioners also urged the Court to constitute an independent SIT (Special Investigation Team) to investigate into the allegations. He further remarked that the State government has been a silent spectator and that even last week people had been hanged and killed as a result of political animosity.

Allegations of the NHRC report being politically motivated:

Senior counsel Abhishek Manu Singhvi appearing for the Director General of Police (DGP, West Bengal) submitted that the NHRC report was completely politically motivated and that the report contains various discrepancies as a result of which it cannot be given due credence. Pointing out one such discrepancy, the counsel noted "The hand written complaints written in Bengali, do not match the synopsis provided by the NHRC report".

Taking strong objection to this contention, senior counsel Jethmalani observed that pursuant to Section 80 of the Evidence Act the evidence submitted by the NHRC must be presumed to be prima facie true. He further added,

"Now the State is accusing the victims of lying on oath? Their victim statements are being questioned now. It cannot be allowed"