'What Is Going On In This Country?', CJI Expresses Anguish At Unnao Tragedy 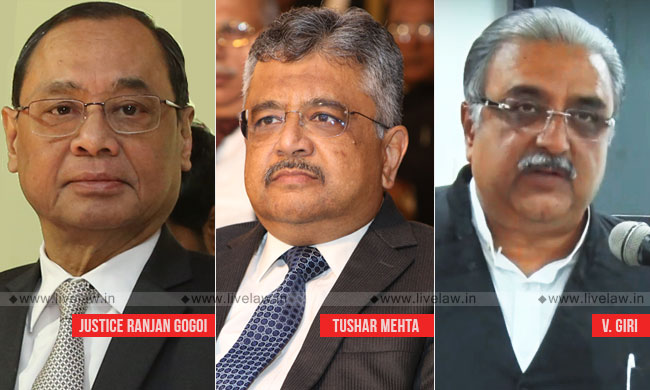 "What is going on in this country?!", asked the Chief Justice Ranjan Gogoi on Thursday, harrowed by the details of the Unnao rape case and the subsequent custodial death of the survivors's father and Sunday's road crash leaving the survivor and her lawyer severely injured and killing two of her aunts. The Chief Justice observed that in the face of the unfortunate events transpiring...

"What is going on in this country?!", asked the Chief Justice Ranjan Gogoi on Thursday, harrowed by the details of the Unnao rape case and the subsequent custodial death of the survivors's father and Sunday's road crash leaving the survivor and her lawyer severely injured and killing two of her aunts.

The Chief Justice observed that in the face of the unfortunate events transpiring across the country, the courts can no longer be confined to the legislative mandate in granting compensation to the survivor's and their families. The Chief Justice also considered if the scope of the main matter - the suo motu petition pertaining to POCSO cases - could also be widened to deal with compensation.

The court was considering the issues of transfer of the trial in the Unnao rape and connected cases outside of UP, bringing the critically-injured survivor and her lawyer to AIIMS, Delhi from the Lucknow hospital, expediting the investigation and the filing of the chargesheet in the instance of the accident, and the security of the survivor, her family and the witnesses.

Solicitor General Tushar Mehta informed the court of the total of four cases and the stages at which they are- the matter of the rape of the survivor on June 4, 2017, where the chargesheet stands filed and the accused in jail; the case registered against the survivor's father under the Arms Act and his death on account of alleged custodial torture (Chief Justice Gogoi posed questions regarding her father's death, the details of the case against him and the date of his arrest); the complaint lodged by the survivor's mother after the father succumbed to death in custody in which the chargesheet has been filed; and the gang-rape of the survivor and her mother.

When the CJ inquired about the survivor's condition, who is battling for her life after the accident, the SG replied she is on ventilator.

"Can she be airlifted and moved to AIIMS?", asked the Chief Justice. A team of doctors is to ascertain if she and her lawyer are medically-fit to be so brought to Delhi and the court wished to be intimated by 2 PM.

"How long will you take to investigate the accident?", asked the Chief Justice from the SG. - "A month...the investigation has only just commenced"

"One month? No, take 7 days. Do whatever you have to", stated the Chief Justice.

In his turn, Amicus Curiae V. Giri, visibly anguished by the instant case, urged the court to accord exemplary compensation to the survivor- "The details are very disturbing...only her mother is at the hospital with her...the mother is not only the main witness but also a victim...the family financial condition is not too good...there is need for security...charges have not been framed in these 2 years"

"An advocate who deals in the commercial law also gets to witness the other side...This is why you were made Amicus...", observed the bench, seeing Mr. Giri moved.

Senior Advocate V Giri is the amicus curiae appointed by the Court to assist in the suo moto petition taken for dealing with issues related to trail in POCSO cases.

The Chief Justice also pressed the Supreme Court Secretary General as to why a letter addressed to the CJ by the survivor's family, dated July 12, complaining of criminal intimidation at the instance of the accused and praying for protective measures came to light only post the accident on Sunday.

"The SC registry receives 5000 letter petitions every month. There were some 6800 last month. The name of the victim was not to be known to the Registry...There is a set screening procedure which was being followed when the accident on Sunday happened, when reports of the family having written to the CJ surfaced. The registry immediately configured which that letter was and brought it to the CJ's notice...the delay was not on purpose...", responded the Secretary General.

Earlier in the day, the Chief Justice had insisted that a responsible CBI officer be present in court at 12 PM to relay the status report as to the rape and the accident cases. "The CBI's investigating officers are out of station for the purpose of the investigation...the case records can be obtained only by this evening...this hearing may be adjourned till tomorrow morning", the SG had pleaded.

"No. The CBI Director can procure this information over the phone...the CBI must be having its own plane? Bring the officers on that. The Solicitor may have his own flight?", remarked the Chief Justice. "No, Your Lordships...even getting tickets on normal flights is difficult for me", said the SG.

Chief Justice Gogoi even stated that the hearing could be held in chambers if the details cannot be revealed in open court. Eventually, Sampat Meena, a CBI Joint Director had appeared before the bench.

In its order pronounced after 2 PM, the bench directed all 5 cases, including that of the road accident, to be tried in Delhi and for the trial to be concluded in 45 days, for the CBI probe into the accident to be completed in a week's time and the chargesheet to be filed at most within 15 days, for CRPF protection to be extended to the victim and her family and for the UP state government to pay interim compensation of Rs. 25 lakhs. The trial judge shall be chosen by name and the trial is to be conducted on a day-to-day basis.

The matter will now be taken up on Friday to check the compliance. The UP government is to also respond on Friday on the transfer to Tihar Jail of the victim's uncle who is lodged in a prison in Rae Bareilly and who has also raised security concerns there (Rape victim's uncle Mahesh Singh against whom as many as a dozen cases have been registered, ranging from railway robbery to attempt to murder, after the allegations of rape were levelled).