'What Is The Point Of Filing So Many Volumes? To Drag Hearing Or To Harass Judges?': CJI In Amazon- Future Case 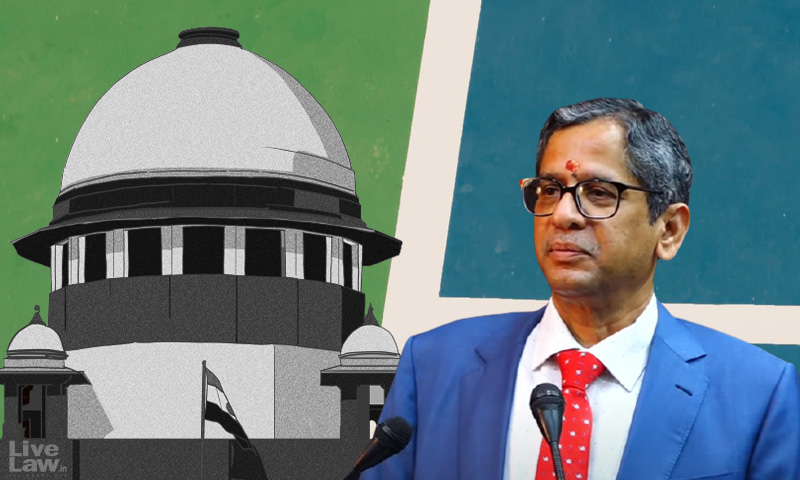 The Chief Justice of India on Tuesday expressed displeasure towards enormous volumes of documents filed by parties in the cases relating to the Amazon- Future dispute."Sorry to say this, what's the point of filing so many volumes? It is with purpose of dragging on or otherwise to harass judges?Is there any other purpose of filing these many documents? What is the point?" CJI Ramana...

The Chief Justice of India on Tuesday expressed displeasure towards enormous volumes of documents filed by parties in the cases relating to the Amazon- Future dispute.

"Sorry to say this, what's the point of filing so many volumes? It is with purpose of dragging on or otherwise to harass judges?Is there any other purpose of filing these many documents? What is the point?" CJI Ramana remarked

A Bench comprising the Chief Justice of India NV Ramana, Justice AS Bopanna and Justice Hima Kohli directed the parties to file a convenience compilation with minimum number of documents which are properly indexed.

The Bench made the remarks after it faced difficulty in locating one of its earlier orders being referred to by the Counsel from the volumes of documents filed.

"This is the problem you file 21 volumes in each case. I've been repeatedly saying. This is what happens. Unnecessary things, repetition of documents!" CJI Ramana said

Addressing the Counsel appearing Amazon, the other side, CJI Ramana further said "so many volumes were filed yesterday, is it necessary? Already other side filed some documents can't you rely on that?"

The CJI led Bench was hearing the following petitions:

The Bench also refused to entertain an application filed by IDBI Trusteeship Services Ltd. seeking clarification of the Supreme Court's 9th September 2021 order whereby it stayed the proceedings instituted by Amazon for the enforcement of the Emergency Award passed in its favour by a Singapore-based arbitrator which halted the merger deal between Future Retail Limited and Reliance group.

Senior Advocate Neeraj Kishan Kaul appearing for IDBI Trusteeship submitted that they are seeking a clarification of the top court's order as they have moved an application before Delhi High Court and want that to be taken up.

" Did we ask HC to not entertain any first proceeding, it was only with regard to subject matter of this SLP. Where is the ambiguity?" the Bench said.

Mr Kaul informed the Bench that notice has already been issued on his application before the Delhi High Court and but after Supreme Court's order all matters have been adjourned to 4th January.

" That is not my concern, if High Court adjourns your case its a matter for this court to interfere?" CJI said.

Justice Hima Kohli stated that the order referred to "any further proceeding before Delhi High Court' which assumes that it will apply to pending proceedings.

"Feel free to move an application before High Court, point it out before the HC that order was pertaining to pending proceeding, and your application be taken up." Justice Kohli said.

The Bench them permitted Senior Counsel Kaul to withdraw the application and move the High Court.

The Future Group has filed a special leave petition before the Supreme Court challenging Delhi High Court's 29th October order rejecting its plea of an ad interim stay on the order passed by a Singapore based Arbitration Tribunal which refused to interfere with the Emergency Award restraining it to continue with the Reliance deal.

Senior Advocate Harish Salve appearing for FRL had urged the Court to pass an interim order to clarify that the Supreme Court's order, which had stayed the proceedings instituted by Amazon for enforcement of the Emergency Award passed in its favour, would remain in force despite the order passed by the arbitration tribunal.

The High Court however was of the view that due to the pendency of various appeals before the Apex Court, a clearance would be needed to proceed in the matter.

What was the Delhi High Court single bench order?

A single judge bench of Justice JR Midha on March 18, 2021 had directed for attachment of property of Future group companies and their promoters including Kishore Biyani and had also directed them to file additional affidavits indicating the details of their assets and property for violation of the emergency award. Also, the Single Bench had rimposed a cost of Rs. 20 lakhs on FRL and its promoters for raising an untenable plea of nullity against the award and the cost was directed to be deposited in PM fund of Covid 19 to be used in vaccination of senior citizens belonging to the below poverty line group. The Court ordered the same to be deposited within 2 weeks and the same shall be put on record within 1 week thereafter.