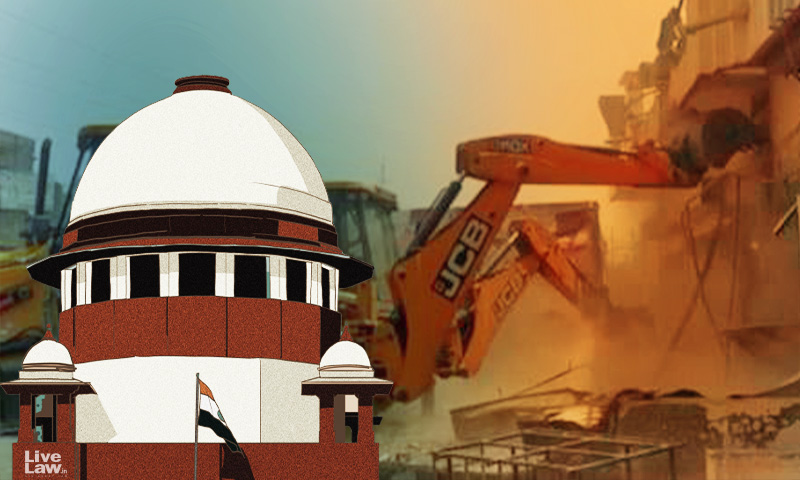 Though not eager to issue notice, the Supreme Court, on Friday, asked its registry to list a plea seeking quashing of notification issued by the North Delhi Municipal Corporation which had called for the demolitions in the riot-hit Jahangirpuri and also sought compensation for the losses caused in the process, with the other petitions pending before it in this regard.

"We will list it with those (Jahangirpuri) matters. Persuade the judges there. We will not issue notice."

The present petition was filed by Advocates practicing before the Supreme Court.

A Bench comprising Justices L. Nageswara Rao and A.S. Bopanna expressed displeasure that advocates and not parties affected have filed the present plea. It noted -

"What is this, Advocates filing! We said political parties we will not entertain, why should we entertain Advocates?"

Previously, a Bench led by Justice Rao had refused to issue notice in a petition challenging the demolition drive in South Delhi as the same was filed by a political party, namely CPI(M).

Advocate, Mr. Prashant Bhushan, appearing for the petitioners, submitted that as the aggrieved parties belong to weaker sections of the society they are being pressurised by authorities. In the light of the same, the Advocates have approached the Court.

"This is a classic case that where the victims are so poor and weak, they are being pressurised."

Justice Rao stated that previously when the petition was mentioned, the Bench was not eager to show indulgence.

"When the Jahangirpuri matter was being taken up, it was mentioned. We said we will not entertain this."

In an attempt to distinguish his petition, Mr. Bhushan submitted -

"There are more comprehensive prayers in this. There is prayer for compensation."

The petition notes that pursuant to the letter of the Delhi BJP Chief Adesh Gupta, which was sent to Mayor of North Delhi Municipal Corporation to identify the illegal construction of the 'rioters' in Jahangirpuri and demolish the same, the Office of Assistant Commissioner, Civil Lines issued notice to carry out an 'encroachment removal action programme' in the Jahangirpuri areas within a period of 3 days. On 20.04.2022, the authorities went ahead with the demolition drive. The issue was mentioned before the Supreme Court and a status quo order was passed. Unfortunately, the authorities present at the site continued the drive stating that they are awaiting a copy of the order. In view of the same, the present matter was mentioned before the Apex Court and finally, the drive was halted.

The petition submits that the demolition drive undertaken in Jahangirpuri was in the teeth of Section 343 of the Delhi Municipal Corporation Act, 1957 whereby notice is to be served upon persons whose constructions are to be demolished and they are to be provided an opportunity to show cause. It is also in violation of Articles 19 and 21 of the Constitution. In absolute disregard for the Court's status quo order, the authorities continued demolition. The petition also avers that the Commissioner of Police, Delhi should not have allowed the implementation of the demolition order which was prima facie void ab initio. It goes on to allege that the 'encroachment removal drive' is a ruse, and is motivated by malafide and extraneous consideration and is a colourable exercise of power, besides being blatantly arbitrary. The petition points out that, mysteriously, the demolition drive was initiated only after the communal clash took place in the area.