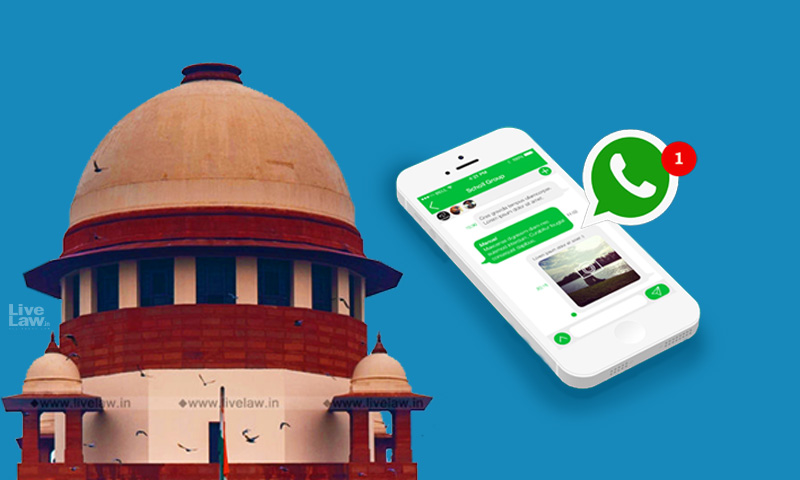 A Writ Petition has been filed in the Supreme Court against the new and updated privacy of WhatsApp, a messaging application owned by Facebook.The Petition filed by Confederation of All India Traders seeks issuance direction to Union Government to take all necessary steps / actions to safeguard and secure the privacy of citizens and national security by ensuring that mobile application...

A Writ Petition has been filed in the Supreme Court against the new and updated privacy of WhatsApp, a messaging application owned by Facebook.

The Petition filed by Confederation of All India Traders seeks issuance direction to Union Government to take all necessary steps / actions to safeguard and secure the privacy of citizens and national security by ensuring that mobile application providers such as whatsapp and other internet based messaging services do not compromise, share and/or exploit the information and data including messages, audio, video and other information of users in any manner whatsoever.

The Petition filed through Advocate Vivek Narayan Sharma also sought a direction in the nature of prohibition or any other writ or direction in the nature thereof prohibiting the Government from allowing WhatsApp And Facebook from sharing, in any manner whatsoever, details and data of every kind of the subscribers / users of Whatsapp with any entity including Facebook or its family of companies.

WhatsApp introduced its new privacy policy through which it scrapped their 'opt-out policy' and from now on the users will have to compulsorily consent to share their data with Facebook and its group companies for using the platform. WhatsApp has offered its users a 'take it or leave it' offer which coerces the users to consent to share their data with third-party companies to use WhatsApp's services.

The petitioner submitted that the updated privacy policy would adversely impact citizens' fundamental right of privacy which is vested under Article 21 of the Constitution. That due to this updated policy, the users will now have to compulsorily share all the information that WhatsApp collects, which includes information about the user's activity on their services, like service-related, diagnostic, and performance information.

"That bare perusal of the privacy policy clarifies that Facebook intends to combine the data sets of individual platforms to create even larger data sets of the users and share the same to third parties for their commercial benefit. This has severely impacted the reasonable expectation of privacy of the users as from now on, information as sensitive and personal as phone number, bank account, card details can be shared with third-party applications. The same is also a potential concerns of small traders who apprehend that their sensitive data would be misused to the detriment of such small traders"

It is also submitted that updated WhatsApp policy is against the public law and policy of India and cannot sustain on the grounds of legality. That collection of excessive data through unilateral terms and conditions, WhatsApp is infringing the fundamental rights of the citizens of their privacy

According to the petition the updated policy is also violative of the statutory scheme envisaged under the Information Technology Act, 2000

Petitioner prays to Court that WhatsApp be directed to retract their updated privacy policy of January 2021 with immediate effect, and the users should be allowed to give an informed consent for collection of their personal data. Also Whatapp be directed to allow relevant Indian Authorities to carry out 'Technical Audits' of their data centres, where the data of Indian Users are stored.

"WhatsApp and other like applications should be directed to amend their policy and must allow for an "opt-in" clause instead of an "opt-out" clause, meaning that the default settings of such applications must not allow for data sharing with third-party applications. However, if a consumer wishes to share such data with third-party for enhanced services, he must opt-in and allow for the same by changing the default settings. Only such a mechanism would amount to giving free, specific, clear and informed consent to data sharing and data collection"

Petitioner ao submitted that the illegal sharing of data would squarely impinge on the right to privacy of the citizens of India, which has been guaranteed under Article 21 of the Constitution of India and against the Supreme Court Judgment in Puttaswamy Case.