'What Is The Appropriate Time For Registering FIR? The City Is Burning', Justice Muralidhar To Solicitor General 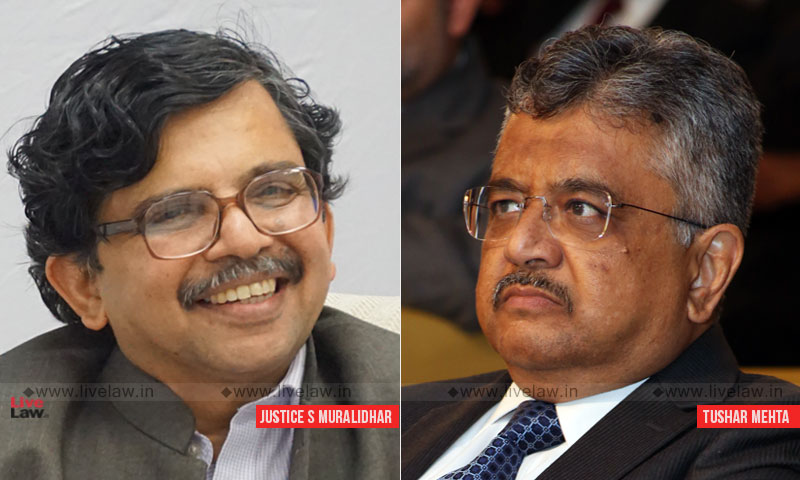 Solicitor General Tushar Mehta on Wednesday vehemently defended in the Delhi High Court the non-registration of FIRs by Delhi Police on allegations of hate speeches made by politicians.The SG said that the petitioner Harsh Mander was selectively seeking action on the speeches attributed to BJP leaders, ignoring inflammatory speeches made by the other side. According to Mander, these speeches...

Solicitor General Tushar Mehta on Wednesday vehemently defended in the Delhi High Court the non-registration of FIRs by Delhi Police on allegations of hate speeches made by politicians.

The SG said that the petitioner Harsh Mander was selectively seeking action on the speeches attributed to BJP leaders, ignoring inflammatory speeches made by the other side. According to Mander, these speeches led to incidents of violence, which culminated in the deadly riots that have gripped North East Delhi now.

"There are videos from all sides. Let the Petitioner inform the court as to why he only chose 3 clips in a PIL. There's selective public outrage based on these 3 videos", the Solicitor General submitted.

"If I start playing the clips that they've made, they'll be an inflammatory situation", the SG added

But this submission seemed to backfire as the bench regarded it as an admission that the speeches cited by the petitioner are indeed inflammatory.

"By saying that, you're painting the police in a worse picture" Justice Muralidhar replied to this submission.

"When the SG himself is saying that these videos are inflammatory, why aren't you registering the FIRs? The entire nation is asking that question", Justice Muralidhar asked the police officer present in Court.

The Solicitor General also submitted that the situation was not 'conducive' for registering FIRs.

"Today is not the day, this is not the time. The Petitioner hasn't proved as to why he's only highlighting these 3 videos as threat to public interest...FIRs will be registered an appropriate time".

To this, Justice Muralidhar asked "'What's the appropriate time, Mr Mehta? The city is burning"

Justice Muralidhar also asked the police why they haven't taken action in respect of such speeches, when they were swift to register FIR in respect of destruction of properties.

"When you've registered FIRs for damages to property, why aren't you registering it for these speeches. Don't you want to even acknowledge the presence of a crime", he asked.

Justice Muralidhar further said, "What is causing us concern is the same slogans are being repeated in all videos. When you don't register FIR, a wrong message goes out which won't deter people from using this slogan"

In the beginning, the Solicitor General had sought for adjourning the hearing till tomorrow.

The SG kept on asking for more time saying that he was not "aware of the facts" and that he wanted to take instructions.

"Isn't lodging of FIRs against the culprits an urgent matter?", Justice Muralidhar asked denying the request for adjournment.

'There are videos that hundreds of people have watched. Do you still think it's not an urgent matter', Justice Muralidhar asks

When the police officer present in the Court said that he has not seen the video of the speech of BJP leader Kapil Mishra, Justice Muralidhar expressed astonishment.

"'This is really concerning. There are so many TVs in your office, how can police officer say that he hasn't watched the videos. I'm really appalled by the state of affairs of Delhi Police".

The judge then asked for playing out the video of Kapil Mishra's speech in the Court room.

The Solicitor General submitted that the content of Kapil Mishra's speech does not directly connect with the violence which erupted in North East Delhi.

Senior Advocate Colin Gonsalves, appearing for the petitioner, referred to the speeches of Union Minister Anurag Thakur, BJP leader Parvesh Verma and Abhay Verma and said that they also contributed to the violence.

"It was Anurag Thakur's speech which had set the ball rolling. Anurag Thakur is a public figure, his speech was circulated all over. It was that one slogan which led to the deaths of 18 people", Gonsalves said.

The speeches of Thakur, Parvesh Verma and Abhay Verma were also played in the Court.

"The fact these persons are so senior in govt hierarchy, it shows that it was part of govt policy to run this narrative", Gonsalves submitted.

After the hearing, the Court directed the Delhi Police Commissioner to take a conscious decision on registration of FIR against the politicians following the guidelines in Lalitha Kumari case by tomorrow. The court has said that it's not restricting itself to the 3 videos of speeches made by BJP leaders. All the videos concerning this matter shall be communicated to the Commissioner.