When Gandhi Refused To Apologize And Faced Contempt Proceedings 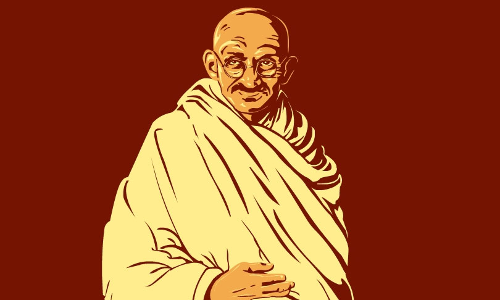 The statement made by Advocate Prashant Bhushan before the Supreme Court bench which found him guilty of contempt has caught wide attention. The said statement made by him is paraphrased from a statement made by Mahatma Gandhi in the contempt proceedings initiated against him by the Bombay High Court in 1919. This article intends to discuss the said contempt case against Gandhi and the...

The statement made by Advocate Prashant Bhushan before the Supreme Court bench which found him guilty of contempt has caught wide attention. The said statement made by him is paraphrased from a statement made by Mahatma Gandhi in the contempt proceedings initiated against him by the Bombay High Court in 1919. This article intends to discuss the said contempt case against Gandhi and the judgment in that case.

Mohandas Karamchand Gandhi and Mahadev Haribhai Desai were the editor and publisher of a weekly newspaper called "Young India". The contempt proceedings were initiated against them for publishing a letter written by the District Judge of Ahmedabad (Mr. B. C. Kennedy) to the Registrar of the Bombay High Court, and also for publishing comments about that letter. The letter written by Judge Kennedy was about the lawyers of the Ahmedabad Court who had signed " Satyagraha pledge, " and undertook to refuse civilly to obey laws like the Rowlatt Act. This letter was published on 6th August 1919 in Young India with a heading: "O'Dwyerism in Ahmedabad". On the 2nd page, an article titled "Shaking Civil Resistors." was published. [Letter can be read below] 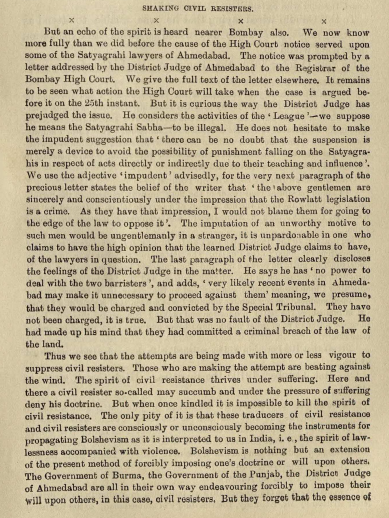 About two months later, the Registrar General of the High Court wrote a letter to Gandhi 'requesting' him to attend the chambers of the Chief Justice on 20th October 1919 to give his explanation regarding the publication of the letter and the comments on it. Gandhi soon wired and informed the Registrar General that he was going to Punjab and enquired whether a written explanation would suffice. The Registrar General replied to him that the Chief Justice agreed to the said course. Gandhi then sent an 'explanation letter' in which he said that he was within his rights to publish the said letter and making comments thereon and that the letter came to his possession in the ordinary course, and was not 'private'. "In my humble opinion I was within the rights of a journalist in publishing the letter in question and making comments thereon. I believed the letter to be of great public importance and one that called for public criticism.", Gandhi said. The Registrar General again wrote to Gandhi saying that the Chief Justice did not find his explanation to be satisfactory. He then gave a format of 'apology' and asked him to publish it in the next issue of 'Young India' [Format may be read below] 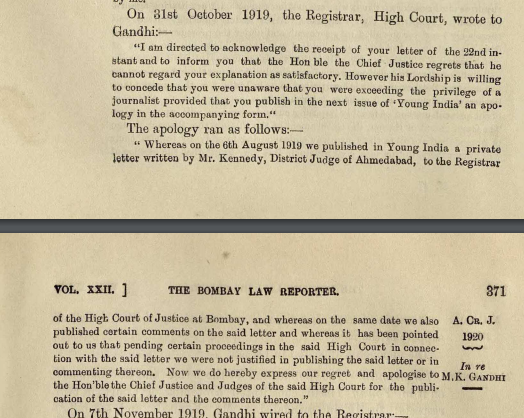 Gandhi again wrote to the Registrar General expressing his regret on refusal to publish the 'apology' and reiterated his 'explanation'. He concluded his letter stating thus: "Should this explanation be not considered sufficient by his lordship, I shall respectfully suffer the penalty that their Lordships may be pleased to impose upon me."

Thereafter, the High Court then issued show cause notices to Gandhi and Desai. Both of them appeared before the Court in person. Gandhi told the Court that he had commented on the District Judge not as a judge but as an individual. "The whole law of contempt of court was that one ought not to do anything, or comment on the proceedings in Court while the matter was subjudice. But here District Judge did something in his private capacity.", Gandhi said. He also added that there was not an iota of disrespect shown to the judge or the judges in comments on this letter. The following was the statement made by Gandhi before the Court:

"With reference to the rule-nisi issued against me I beg to state as follows:-Before the issue of the rule certain correspondence passed between the Registrar of the Honourable Court and myself. On the 11th December I addressed to the Registrar a letter which sufficiently explains my conduct. I, therefore, attach a copy of the same letter. I regret that I have not found it possible to accept the advice given by His Lordship the Chief Justice. Moreover, I have been unable to accept the advice because I do not consider that I have committed either a legal or a moral breach by publishing Mr. Kennedy's letter or by commenting on the contents thereof. I am sure that this Honourable Court would not want me to tender an apology unless it be sincere and express regret for an action which I have held to be the privilege and duty of a journalist. I shall therefore cheerfully and respectfully accept the punishment that this Honourable Court may be pleased to impose upon me for the vindication of the majesty of law. I wish to say, with reference to the notice served on Mr. Mahadeo Desai, the publisher, that he published it simply upon my request and advice."

Desai's statement read thus: "With reference to the rule-nisi served upon me, I beg to state that I have read the statement made by the editor of Young India and associate myself, with the reasoning adopted by him in justification of his action. I shall therefore cheerfully and respectfully abide by any penalty that this Honourable Court may be pleased to inflict on me."
A three judge bench of Justices Marten, Hayward, Kajiji decided the contempt case. Justice Marten held that publication of the letter amounted to contempt. He observed that there were "some strange misconceptions in the minds of the respondents as to the legitimate liberties of a journalist". The judge concluded thus:

"We have large powers and in appropriate cases can commit offenders to prison for such period as we think fit and can impose fines of such amount as we may judge right. But just as our powers are large, so ought we, I think, to use them with discretion and with moderation, remembering that the only object we have in view is to enforce the due administration of justice for the public benefit.

In the present case, the Court has very seriously considered whether it ought not to impose a substantial fine on one, if not both, of the respondents. But on the whole, I think it sufficient for the Court to state the law in terms which I hope will leave no room for doubt in the future, and to confine our order to severely reprimanding the respondents and cautioning them both as to their future conduct."

The other judges concurred with Justice Marten's finding and conclusion. Justice Hayward wrote a concurring opinion and said:

"They have expressed their inability to apologise formally but have at the same time represented their readiness to submit to any punishment meted out to them. It is probable that the Editor, the respondent Gandhi, did not realize that he was breaking the law and there would be do doubt, if that were so, that it was not realised by his publisher, the respondent Desai. The respondents seem to have posed not as law-breakers but rather as passive resistors of the law. It would, therefore, be sufficient, in my opinion, to enunciate unmistakeably for them the law in these matters, to severely reprimand them for their proceedings and to warn them of the penalties imposable by the High Court.

In short, the High Court found the charges proved, but it chose to close the contempt case by 'severely' reprimanding Gandhi and Desai and cautioning them both as to their future conduct.