'When There's A Pandemic, Insurance Companies Can't Keep Their Hands Off', Observes SC 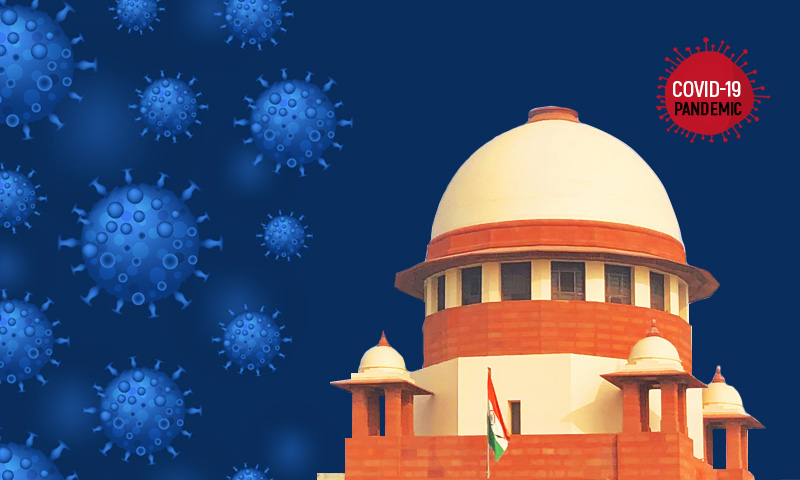 The Centre informed Supreme Court on Wednesday that rates fixed under the Ayushman Bharat Scheme or the Central Government Health Scheme (CGHS) could be considered as a criterion to stipulate price caps for COVID19 treatment in private hospitals.A bench of Chief Justice SA Bobde, Justices AS Bopanna & V. Ramasubramanium was hearing a Public Interest Litigation filed by Advocate Sachin...

The Centre informed Supreme Court on Wednesday that rates fixed under the Ayushman Bharat Scheme or the Central Government Health Scheme (CGHS) could be considered as a criterion to stipulate price caps for COVID19 treatment in private hospitals.

A bench of Chief Justice SA Bobde, Justices AS Bopanna & V. Ramasubramanium was hearing a Public Interest Litigation filed by Advocate Sachin Jain nationwide cost-regulations for treatment of Coronavirus patients at private and corporate hospitals and took on record an affidavit filed by the Ministry of Health outlining guidelines for states viz. cost regulations.

The bench stated that the Centre's reply was satisfactory and that the issue of earmarking caps on cost should be left to individual state Governments. Further to this, the Court also asked the Centre to urge insurance companies to release dues promptly.

Bench: "When there's a pandemic, insurance companies cant keep their hands off"

Senior Advocate Harish Salve appearing for private healthcare providers opposed the direction to cap cost treatments of COVID treatment will "grievously hurt" private hospitals. He argued that the concern about profiteering would be understandable if there was a rush and people were being forced into private commercial establishments for treatment.

Senior Advocate Mukul Rohatgi also urged that people with insurance cannot be allowed price caps. "Price cap should not be made applicable in cases of co-morbidity" he added.

On 14 July, the Supreme Court had asked the central government to frame guidelines regulating costs of Covid-related treatments.

Solicitor General Tushar Mehta said the cost of treatment in these hospitals should be earmarked, however the "issue of caps on pricing or Covid treatment should be left to the individual state government".

The court adjourned the matter for two weeks after private hospitals asked for some time to respond to the government's affidavit.

Advocate Sachin Jain, petitioner-in-person in his plea has argued that there must be a regulation for all entities as the government has given them unfettered powers to charge patients.

"In Private hospitals that are dedicated COVID hospitals, there is no qualification as to how much they hospitals can charge. Patients are being charged between 10 and 12 lakhs. Government has given them unfettered powers to charge" he said.

It further elucidated its averments by pointing to various reports of surging bills of COVID patients and the resultant barrage on insurance companies for reimbursements.

"It is submitted that if such inflated billing by the private hospitals can become a cause of concern for the insurance industry, what will be the plight of a common man who neither has a fat wallet nor an insurance cover to reimburse, in case, he requires hospitalization in a private hospital. It is a matter of grave concern that a large section of people in India still do not possess any insurance cover and are also not benefitted under any government health scheme." - the petition reads.