"When Will Trial Start?", "How Will Letters Be Proved?", Supreme Court Asks NIA In Bhima Koregaon Case 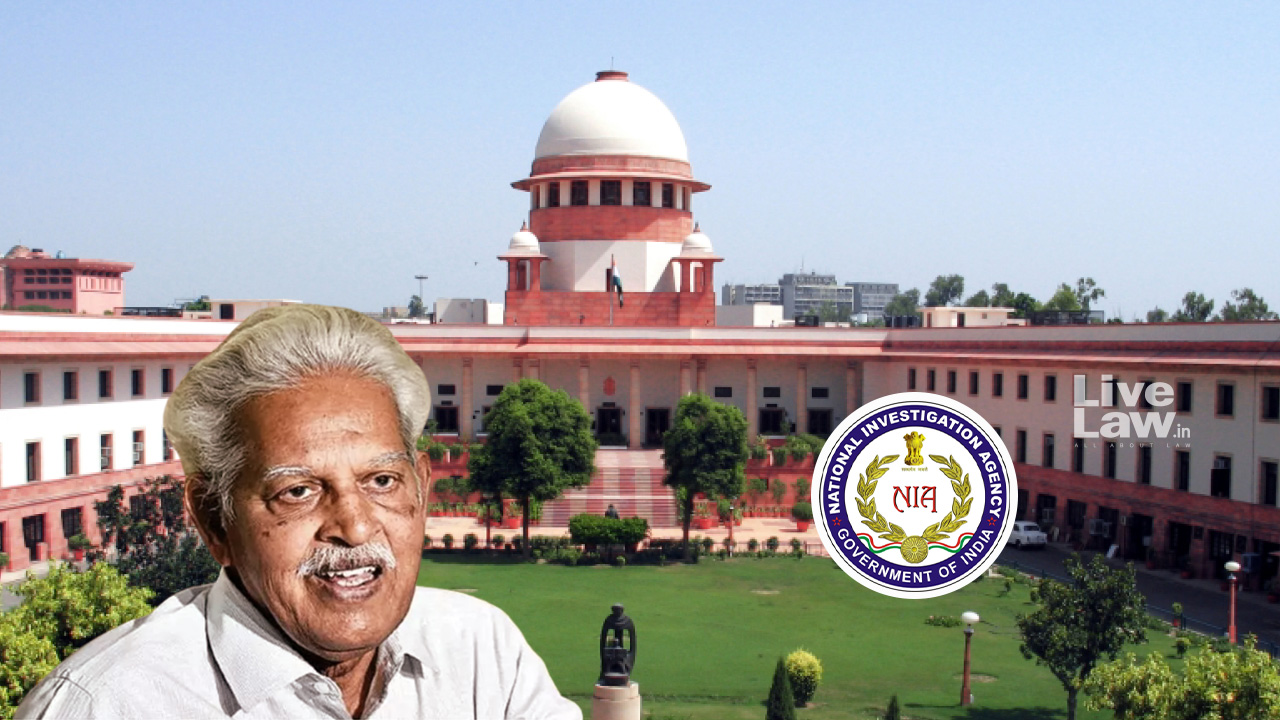 While hearing Varavara Rao's bail application, the Supreme Court on Wednesday posed a host of queries to the National Investigation Agency on the Bhima Koregaon case, in which the agency has kept in custody several persons from academic-activist backgrounds on UAPA charges over alleged links with banned Maoist organization.A bench comprising Justices UU Lalit, Aniruddha Bose and Sudhanhsu...

While hearing Varavara Rao's bail application, the Supreme Court on Wednesday posed a host of queries to the National Investigation Agency on the Bhima Koregaon case, in which the agency has kept in custody several persons from academic-activist backgrounds on UAPA charges over alleged links with banned Maoist organization.

A bench comprising Justices UU Lalit, Aniruddha Bose and Sudhanhsu Dhulia asked when the trial in the case will start, after noting that the trial court is yet to frame charges against the accused though chargesheet has been filed.

"The trial will take at least 10 years even if it starts today and there are 16 accused", Senior Advocate Anand Grover, appearing for 82-year old Rao, said.

Additional Solicitor General SV Raju, appearing for the NIA, blamed the accused for causing delay in the trial by filing repeated applications. Replying to a pointed query by the bench regarding the time required to complete the trial, the ASG said, "One and a half years".

When the bench expressed its inclination to grant bail to Rao considering his advanced age and medical ailments, the ASG referred to the "grave allegations" against the accused. The ASG took the bench through the NIA's counter-affidavit and read out the contents of a letter which is allegedly addressed to co-accused Rona Wilson by Comrade M (Milind Teltumbde, an absconding accused who got killed in an encounter last year). The ASG also referred to certain alleged correspondences from "Comrade Prakash" and "Comrade Chandrashekhar" and said that they were discussing plans to finance the procurement of weapons to be used against the armed forces.

The bench asked if the said "Comrades" are in NIA custody. The ASG replied that Milind Teltumbde has been killed in an encounter and other persons are absconding.

Justice Lalit then asked how the agency will prove the letters by linking it to Rao. "How are you going to prove the contents of the letter when these people are not in your custody?", Justice Lalit asked. ASG replied that there are emails which could be proved under Section 65B of the Evidence Act.

The ASG argued that the allegations are very grave and referred to an article in "India Today" regarding red terror attacks.

"Unless it is on record, we cannot put something on our own", Justice Lalit replied.

The ASG then said that the Maoists are responsible for ambushing security forces.

"According to your chargesheet, how many deaths these persons are responsible for?", Justice Lalit asked.

"According to chargesheet, no death at all, no terrorist activity, and it is all based on electronic evidence which we are disputing", Rao's lawyer Grover replied.

The ASG said the accused are responsible for the death of one person. When Justice Lalit asked where did the person die, ASG replied "Bhima Koregaon".

"Bhima Koregaon is in Pune, it happened during the agitation. According to you, are the accused responsible for deaths in Gadhchhiroli or Andhra-Telangana belt?", Justice Lalit asked.

The ASG also argued that bail cannot be granted on medical grounds under Section 43D(5) of the UAPA. At this point, Justice Lalit pointed out to the judgment in the case Union of India vs Najeeb which held that Section 43D(5) UAPA does not limit the power of Constitutional Courts to grant bail on grounds of violation of fundamental rights.

The ASG disputed that medical condition of Rao was serious. "Discharge certificate says that he is stable.. There cannot be medical bail on such serious anti national activities", he said. The ASG also pointed out that the Supreme Court had refused medical bail to Asaram Bapu.

The bench pointed out that age affects different people differently.

"There are people who run marathons at the age of 90..if you have a medical condition at the age of 80, recovery is difficult", Justice Lalit said. "The broad picture is that he has been under custody for over two and half years, and he is 82 years. It is not your case that he has misused the liberty", the judge observed. The NIA has no case that it did not get opportunity to have his custodial interrogation, Justice Lalit pointed out.

Rao's lawyer Grover submitted that all the so-called letters are allegedly recovered from laptops and that there are international forensic reports which show that the documents are planted. He also said that the cloned copies of the electronic evidence have not yet been given to the accused.

"How long should I be in jail? Till death? I should die in jail. They want me to die in jail like Stan Swamy", Grover said.

Grover said that Rao is a Telugu poet and he has been acquitted in all other cases. The NIA has no case that Rao has misused the liberty granted to him. Rao has conditions of Parkinson's and other ailments which cannot be treated at Taloja jail. "I will die if I am sent back to Taloja", Grover said.

After the hearing, the bench granted bail to Rao on medical grounds and set aside the condition imposed by the Bombay High Court that he should surrender within 3 months. He has been however asked to stay within Greater Mumbai area and not to leave the region without permission from the Special NIA Court at Mumbai.