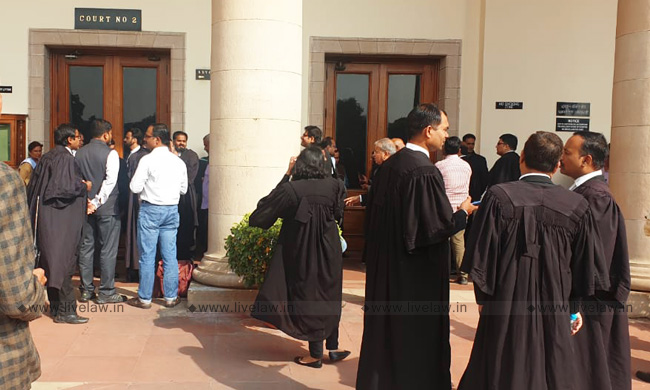 "Whether an AOR can have his entry in the AOR register in the form of his style of carrying on his profession: Instead of just "Name" as "Name", Sole Proprietor, Law Chambers of "Name"?", asked the Supreme Court on Monday.The bench of Justices S. K. Kaul and Dinesh Maheshwari was considering a suo motu writ petition on whether "Advocate on Record includes a proprietary firm"."Mr....

"Whether an AOR can have his entry in the AOR register in the form of his style of carrying on his profession: Instead of just "Name" as "Name", Sole Proprietor, Law Chambers of "Name"?", asked the Supreme Court on Monday.

The bench of Justices S. K. Kaul and Dinesh Maheshwari was considering a suo motu writ petition on whether "Advocate on Record includes a proprietary firm".
"Mr. Siddharth Murarka (AOR) says he has been making filings in this manner before several High Courts and that it is only in the Supreme Court that this practice is not being accepted. He says this places him at a disadvantage as compared to partnership firms. He contends that there may be no impediment in allowing this practice, as a 'firm' may even be a sole proprietorship...", recorded the bench, noting that while a duly registered partnership firm can sue and be sued in its own capacity, the same is not true in case of a sole proprietorship firm where only the proprietor may be sued.
"The second problem is that the institution of the AOR is specific to the Supreme Court. So we need to look at the relevant Rules to find out how it operates. In this behalf, we sought the assistance of Senior Advocate Kailas Vasdev, the Vice-President, SCBA (and Amicus Curiae in the matter) and Mr. Shivaji M. Jadhav, President, SCAORA. Indicating Order 4 of the Supreme Court Rules, 2013, the Amicus advanced that even partnership firms can only be of AORs and must be registered in that capacity", observed the bench.
"SC Rules recognise AORs individually and not firms. Even if the filing is in the name of a firm, the name of the AOR has to be mentioned first. The AOR is recognised under the Rules and permission is granted for performance as such, for chambers and for other purposes after due tests and examination...some responsibilities are also placed on him under the Rules. All this cannot be given away to the front of the firm which hires AOR services for filing...this would require the setting aside of the Rules in entirety", advanced the Amicus.

"Suppose Mr. Murarka files as himself, as the sole proprietor of an *entity? Is that a problem/", asked Justice Kaul.

"He can describe himself as the firm, but the filing can only be in the name of Mr. Murarka", replied Mr. Jhadhav.

"So he puts his name as AOR. And he describes himself as Siddharth Murarka, AOR, Sole Proprietor of Law Chambers of Siddharth Murarka? Sole Proprietorship is a trading style in business!", pressed Justice Kaul.
"There is a problem because the provision in the Rules is only for partnership firms", it was countered.
"Everywhere it is said AOR or firm. There is no definition of 'firm'. It doesn't say that it must be a partnership firm. In Bombay HC etc, I have always filed like this. Only the SC demands that I register a firm", argued Mr. Murarka.
"You are saying 'Law Chambers of Siddharth Murarka' shows you in a better light than just 'Siddharth Murarka'?", asked Justice Kaul.

"A sole proprietorship has no legal status while a partnership does. If someone wants to carry on a profession, why should one impede it? ", asked Justice Kaul, asking what the fraud in such a manner of practice is.
"Can we go behind a partnership to see what business is going on? No, we cannot do that. If someone is interested in filing and makes an AOR his partner for this, can we say that you are making him a partner because he is an AOR? That arrangement is their business.", observed the judge.
"No, only AOR is allowed", it was insisted. In response, Mr. Vasdev indicated Rules 22 and 23 in Order 4 of the 2013 Rules- Rule 22 stipulating that Two or more advocates on record may enter into a partnership with each other, and any partner may act in the name of the partnership provided that the partnership is registered with the Registrar, and 23 requiring that "Two or more advocates not being senior advocates or advocates on record, may enter into partnership and anyone of them may appear in any cause or *matter before the Court in the name of the partnership".

"If you are an AOR and you want to run your own firm, then do whatever you want. But filing can only be through an AOR or a partnership of AORs", asserted the Amicus.

The Court adjourned the matter to a later, seeking notes in this behalf from the representatives of the SCBA, SCAORA and the petitioner.