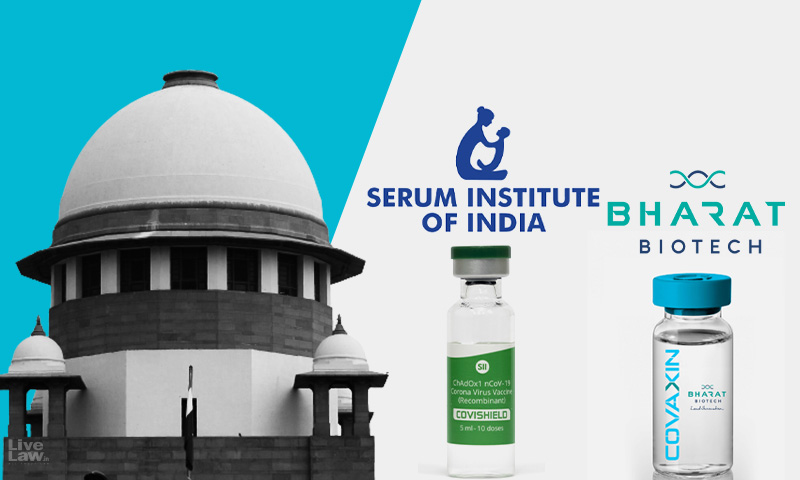 The Supreme Court has sought from the Central Government the details of public funding and aid given to COVID vaccine manufacturers Bharat Biotech and Serum Institute of India.

The Court has also asked whether the current vaccine procurement prices for the Central Government account for the aid provided to the companies. If the vaccine prices account for such grant, on what basis the same benefit has been denied to the State Governments, which also serve the needs of the people, the Court further asked.

A bench comprising Justices DY Chandrachud, L Nageswara Rao and S Ravindra Bhat raised these questions in the suo moto case In Re Distribution of Essential Supplies and Services During Pandemic.

The bench took note of the submission made by the Central Government that the Finance Ministry has sanctioned a credit of Rs 3000 crores for Covishield manufacturer-Serum Institute of India and Rs 1500 crores to Covaxin manufacturer-Bharat Biotech. Additionally, another Rs 65 crores is stated to have been provided to Bharat Biotech‟s production center at Bangalore. The Central Government also provided the Court with further information on advance funding(of unspecified amounts)that is being provided to R&D and manufacturing facilities.

In the light of these public investments, the Court observed that the Central Government should revisit its vaccine pricing policy, which forces State Governments to procure from open market the vaccines for the age group of 18-45 years, competing with private entities.

The Court has asked the following questions :

(i)Whether, and if so, the Finance Ministry or any other funding organization of the Government of India have made any grants/sanctions to Bharat Biotech and the SII in the past, like the current infusion of Rs 1500 crores and Rs 3000 crores, respectively. If so, breakup and corelation with the total cost of development and production of the two vaccines;

(ii)Whether the current procurement prices for the Central Government account for infusion of funds for production, infrastructure and other aid provided by it. If so, the basis on which the same benefit is denied to procurement by State Governments which equally service the needs of citizens; and

(iii)The full extent of direct and indirect grant/aid provided for research, development and manufacture of all existing vaccines and future vaccines that it proposes to authorize. For instance, the Central Government has submitted in its affidavit that the Department of Biotechnology has facilitated the trials for Sputnik V.

The Court also observed that the the manner in which Centre's current vaccine policy has been framed would prima facie result in a detriment to the right to public health which is an integral element of Article 21 of the Constitution.

The Order, which had been reserved by the Apex Court on 30th April, states that there are several aspects of the vaccine pricing policy adopted by the Central Government which need to be revisited.   It goes on to note that the end use of the vaccines, whether purchased by the Centre or the remaining 50%, is the same.

"The Central Government proposes to purchase half of the total quantity falling within its 50 percent quota while the rest, the manufacturers would declare in advance the price fixed, allowing the State Governments to negotiate their terms."

Highlighting that as the manufacturers have suggested two prices, a lower one for the Centre and higher price for the State, the bench observed, "It is likely that compelling the State Governments to negotiate with manufacturers on the ground of promoting competition and making it attractive for new vaccine manufactures will result in a serious detriment to those in the age group of 18 to 44years,who will be vaccinated by the State Governments".

"The social strata of this age group also comprises persons who are Bahujans or belong to other underprivileged and marginalized groups, like many in the other population age groups. They may not have the ability to pay".

Therefore, the Order notes that the availability of vaccines to these groups will depend upon the decision of each State Government, based on their finances and will therefore create disparity across the nation

"The vaccinations being provided to citizens constitute a valuable public good. Discrimination cannot be made between different classes of citizens who are similarly circumstanced on the ground that while the Central Government will carry the burden of providing free vaccines for the 45 years and above population, the State Governments will discharge the responsibility of the 18 to 44 age group on such commercial terms as they may negotiate".

Rational method would be for Centre to procure all vaccines

It is further noted that that rational method of proceeding in a manner consistent with the right to life, which includes to right health, would be for the Centre to procure all vaccines and to negotiate the price with the vaccine manufacturers.

"In other words, while procurement would be centralized, distribution of the vaccines across India within the States/UTs would be decentralized. While we are not passing a conclusive determination on the constitutionality of the current policy, the manner in which the current policy has been framed would prima facie result in a detriment to the right to public health which is an integral element of Article 21 of the Constitution".

"Prima facie, the rational method of proceeding in a manner consistent with the right to life (which includes the right to health) under Article 21 would be for the Central Government to procure all vaccines and to negotiate the price with vaccine manufacturers. Once quantities are allocated by it to each State Government, the latter would lift the allocated quantities and carry out the distribution. In other words, while procurement would be centralized, distribution of the vaccines across India within the States/UTs would be decentralized. While we are not passing a conclusive determination on the constitutionality of the current policy, the manner in which the current policy has been framed would prima facieresult in a detriment to the right to public health which is an integral element of Article 21 of the Constitution. Therefore, we believe that the Central Government should consider revisiting its current vaccine policy to ensure that it withstands the scrutiny of Articles 14 and Article 21 of the Constitution", the order said.

The Court has sought the following clarifications :

The methodology which the Central Government was envisaging to procure adequate vaccine doses for the population prior to the revised strategy which was announced amidst the second wave of COVID-19; and

Whether any studies and figures were relied upon in order to arrive at the conclusion that decentralized procurement would spur competitive markets to incentivize production and eventually drive down the prices of the vaccines. Whether these studies are of relevance in a pandemic when vaccines are a scarce and essential commodity which is being produced by a limited number of manufacturers for a limited number of vaccines.

The Court also asked the Centre about the use of powers under Patents Act, including those relating to compulsory licensing, to make COVID vaccines and drugs more accessible to the public.

"This Court is further of the opinion that prima facie the present circumstance warrant the government's examination of its the extraordinary powers, meant to be used in extreme situations, such as the current pandemic, for fixing drug prices, be it vaccines, or patented formulations, having regard to the provisions of the Drugs and Cosmetics Act, 1940 and other provisions34.We are cognizant that invocation of the above provisions, if any, is ultimately a policy decision of the Central Government and may encompass negotiations with the concerned stakeholders. We hope that the Central Government will adopt a route that best serves the public interest", the Court observed.

The court will consider the matter next on May 10.