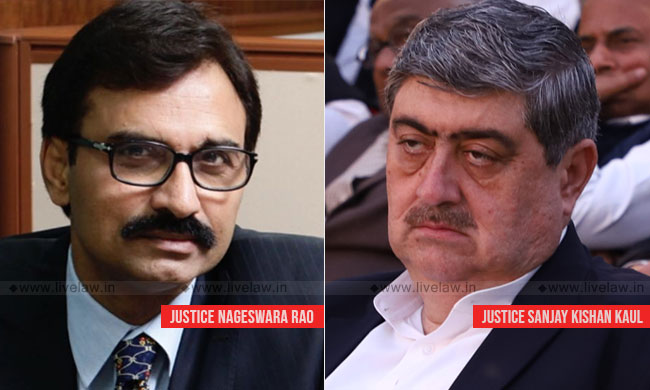 x
"If there is no consideration for these replaced parts, can sales tax be levied at all?", wondered the bench.

A two judges' bench of the Supreme Court today referred to larger bench the issue whether sales tax in respect of the free replacement of defective parts in motor vehicles, during the period of warranty.The bench of Justices L Nageswara Rao and Sanjay Kishan Kaul doubted the correctness of 2004 judgment in the case Mohd. Ekram Khan & Sons v. Commissioner of Trade Tax, U.P., delivered by...

A two judges' bench of the Supreme Court today referred to larger bench the issue whether sales tax in respect of the free replacement of defective parts in motor vehicles, during the period of warranty.

The bench of Justices L Nageswara Rao and Sanjay Kishan Kaul doubted the correctness of 2004 judgment in the case Mohd. Ekram Khan & Sons v. Commissioner of Trade Tax, U.P., delivered by a bench of Jusices S N Vairava and Arijit Pasayat, which had held that sales tax will be payable in such instances. The Court's reasoning in Mohd.Ekram Khan was based on the fact that when defective parts are returned by the dealer to the manufacturer, it is issued a credit note by the manufacturer.

In the present batch of appeals,  the appellants were vehicle dealers, who were levied with sales tax on free supply of spare parts. As per the arrangement, the dealer has to keep a ready stock of spares to facilitate replacement on demand by a customer during warranty period. The purchaser has an option to go to any dealer, and not be confined to the dealer from whom the purchase was made. Sales tax is paid on the stock of spare parts purchased from the manufacturer. The defective parts are sent back to manufacturer, which issues credit note to the dealer.  The customer does not pay for the replacement of the defective part

The stand of the Revenue was that sales tax is liable to be paid as credit note is given for the spare parts to the dealer.

Senior Counsel P Chidambaram appearing for the dealer took the bench through several decisions of SC and High Courts prior to Mohd.Ekram, which consistently took the position that that free supply of spares cannot be regarded as sale(Premier Automobiles Ltd. & Anr. Etc. v. Union of India, Commissioner of Sales Tax v. M/s. Prem Nath Motors (P) Ltd, Premier Automobiles Ltd. & Anr. Etc. v. Union of India etc).  The line of thinking in those decisions was that there is no separate consideration paid by the customer for replacement of parts during warranty period. The original cost of vehicle is deemed to include this service as well. The responsibility of the replacement is ultimately on the manufacturer. For sake of convenience, the dealer first makes the replacement, who gets the reimbursement done later from the manufacturer.

But this position was overruled in Mohd.Ekram, which treated the supply of spares by manufacturer to dealer as sale, based on the practise of issue of credit notes. ""in a case the manufacturer may have purchased from the open market parts for the purpose of replacement of the defective parts, for such transactions, it would have paid taxes. The  position is not different because the assessee had supplied the parts and had received the price", the bench had observed in Mohd.Ekram.

The appellant also referred to Section 4(1) of the Sale of Goods Act to emphasise that payment of price is an essential feature of sale, and therefore free supply of spares cannot be regarded as sale in law.

The bench headed by Justice Rao observed that "the crucial point which would arise for consideration, and over which the matter needs to be debated, is as to whether, in the case of such a warranty for the supply of free spare parts; once the replacement is made, and the defective part is returned to the manufacturer, sales tax would be payable on such a transaction relating to the spare part, based on a credit note, which may be issued for the said purpose".

It prima facie agreed with the contentions of the appellants. "if there is no consideration for these replaced parts, can sales tax be levied at all?", wondered the bench.

As regards the reference to credit notes in Mohd.Ekram, the bench observed whether credit notes could be regarded as a mode of payment.

"We have some reservations in respect of the observations and legal propositions laid down in the Mohd. Ekram Khan & Sons case and consider it appropriate that the matter be considered by a larger Bench", observed the order written by Justice Kaul for the bench.