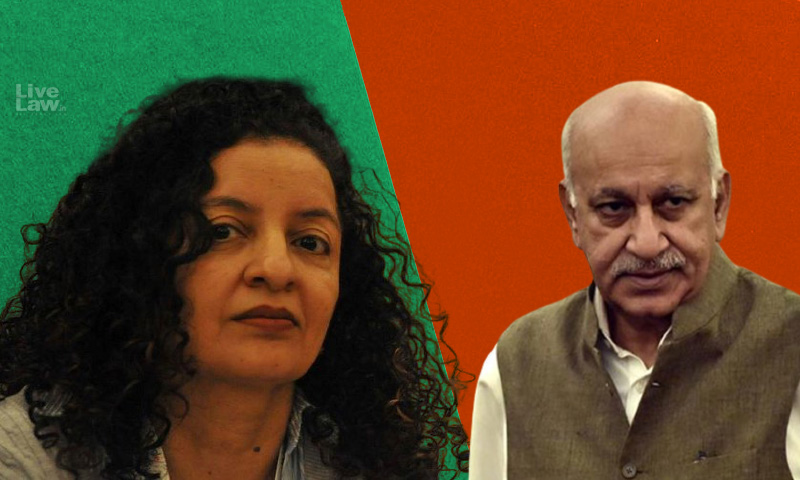 The verdict on journalist Priya Ramani's acquittal in former Union Minister MJ Akbar's defamation case against her, delivered by ACMM Ravindra Pandey of Rouse Avenue Court in Delhi, may well be a long due shot in the arm for rights of sexual harassment survivors in the country. Ramani's act of speaking out, her firm refusal to "settle" the matter when offered to do so, and her defence in...

The verdict on journalist Priya Ramani's acquittal in former Union Minister MJ Akbar's defamation case against her, delivered by ACMM Ravindra Pandey of Rouse Avenue Court in Delhi, may well be a long due shot in the arm for rights of sexual harassment survivors in the country.

Ramani's act of speaking out, her firm refusal to "settle" the matter when offered to do so, and her defence in the case – all go on to do the very thing she claimed she had spoken out for – public good and public interest. Even today, at the end of this long, haranguing battle waged against her for having spoken up, Ramani stuck to her guns, and said of the verdict, "I hope it will make more women speak up, and I also hope it will discourage powerful men from filing false cases against women who share their truths."

The verdict, which both Ramani and her counsel, Sr. Adv. Rebecca John were all praises for, addresses not just Ramani's case, but removes several roadblocks faced every now and then by sexual harassment survivors.

Be it the initial uncertainty, the difficulties faced from within and around oneself, or the courage required to speak up and sustain the fight, the verdict addresses each question and states that, "It cannot be ignored that most of the time, the offence of sexual harassment and sexual abuse is committed in the close doors or privately," and "sometimes the victim herself does not understand what is happening to them or what is happening to them is wrong."

The court also noted that it cannot be discounted that sometimes even the most well-respected persons in the society could in fact be involved in sexual abuse or harassment and that it may not always be easy for the victim to speak up against such persons – however, this mere fact should not be held against her at a later stage.

"The woman cannot be punished for raising voice against the sex ­abuse on the pretext of criminal complaint of defamation as the right of reputation cannot be protected at the cost of the right of life and dignity of woman as guaranteed in Indian Constitution under article 21 and right of equality before law and equal protection of law as guaranteed under article 14 of the Constitution. The woman has a right to put her grievance at any platform of her choice and even after decades".

Pointing out the lack of a systematic mechanism to redress the grievance of sexual harassment at the workplace prior to the framing of the Vishakha guidelines and enactment of the Sexual Harassment of Women at Workplace (Prevention, Prohibition and Redressal) Act, 2013, the court also observed that sometimes a survivor may also not be able to approach the appropriate legal forum due to the lack of a system in place, as had happened in Ramani's case, however, this fact ipso facto must not be held against the survivor.

The court went a step further, and accorded validation and recognition to the fact that sometimes, even today, the social stigma attached to sexual harassment may prevent a woman from approaching authorities or worse, she may not understand for many years as to what has really happened with her. The court further highlighted that at times, a victim may believe herself to be at fault and may not speak in shame, for years. None of these reasons can be held against her while judging her intent when she does decide to speak up.

"The victims of the sexual­ abuse not even speak a word about abuse for many years because sometimes she herself have no idea that she is a victim of abuse. The victim may keep believing that she is at fault and victim may live with that shame for years or for decades. Most of the women who suffer abuse do not speak up about it or against it for simple reason " The Shame" or the social stigma attached with the sexual­ harassment and abuse. The sexual abuse, if committed against woman, takes away her dignity and her self confidence. The attack on the character of sex ­abuser or offender by sex abuse victim, is the reaction of self defence after the mental trauma suffered by the victim regarding the shame attached with the crime committed against her."

Importantly, the court further laid down that a victim has the right to speak up at any platform of her choice and even after decades and cannot be punished for raising her voice against sexual abuse on the pretext of criminal complaint of defamation.

At a time when Ramani, an educated, well-established woman could be dragged to court for having put her story out on a social media handle, it is not a hyperbole to conclude that the rights recognized in the verdict, directly or otherwise, will go a long way in protecting the rights of sexual harassment survivors.