No Interference Needed When Adult Woman Marries As Per Her Choice & Decides To Convert: Calcutta High Court 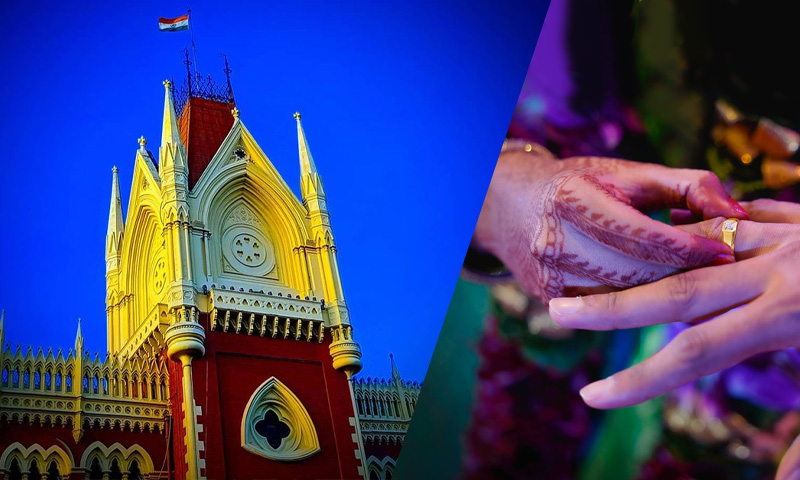 x
"If an adult marries as per her choice & decides to convert, there could be no interference in the matter" : Calcutta High Court

The Calcutta High on Monday (21st December) made it clear that if an adult marries as per her choice and decides to convert and not return to her paternal house, there could be no interference in the matter.The Bench of Justice Sanjib Banerjee and Justice Arijit Banerjee was hearing a plea by a father alleging that daughter (Pallabi Sarkar) aged 19 had gone missing on or about September...

The Calcutta High on Monday (21st December) made it clear that if an adult marries as per her choice and decides to convert and not return to her paternal house, there could be no interference in the matter.

The Bench of Justice Sanjib Banerjee and Justice Arijit Banerjee was hearing a plea by a father alleging that daughter (Pallabi Sarkar) aged 19 had gone missing on or about September 15, 2020.

According to a report filed by the Officer-in-Charge of Murutia Police Station dated December 7, 2020, one Asmaul Shaikh had married the petitioner's daughter Pallabi Sarkar.

The report also contained a copy of a statement rendered by Pallabi on September 16, 2020 before the Judicial Magistrate, Tehatta under Section 164 CrPC which indicated that she had a relationship with Asmaul and was willingly living with Asmaul.

To this, the petitioner (Pallabi Sarkar's father) claimed that he visited the court of the Judicial Magistrate on the day that his daughter's statement was recorded under Section 164 CrPC, and asserted that he was not allowed to meet his daughter or talk to her.

Significantly, the petitioner claimed that that her daughter had made a statement against her wishes.

In response to his allegations, Court ordered that Pallabi be brought before the senior-most Additional District Judge stationed in Tehatta and the petitioner would also be present before the Judge.

The Court also ordered that the petitioner and his daughter be allowed to interact in the presence of the concerned Additional District Judge and to ensure that there is no pressure which is brought to bear on Pallabi at the time of such interaction.

Pursuant to this, a "clear and clean report" was furnished by the Additional District Judge related to the interaction of the petitioner with his daughter; still, the father (petitioner) harboured some suspicion.

Consequently, to allay the father's suspicion, the Court has, on Monday ordered that Pallabi Sarkar (now known as Ayesha Khatun), would meet Mr. Saibal Bapuli, Additional Public Prosecutor, in Mr. Bapuli's chamber in Calcutta on December 23, 2020 at 10.30 am.

The Court also ordered that at the time that Pallabi meets Mr. Bapuli, there should be no one else in the room, including Pallabi's husband.

Further, Mr. Bapuli has been directed to file a short report when the matter appears next on December 24, 2020.

The statement by the Calcutta High Court assumes relevance in the backdrop of recent cases wherein converting one's religion or marrying someone from another religion has sparked controversy and there are numerous examples to this effect.

In a controversial ruling, which was later on declared as bad in law, the Allahabad High Court had, on 23rd September 2020, dismissed a writ petition seeking police protection filed by a married couple.

This was after the Court had noted that the girl was a Muslim by birth and she had converted her religion to Hinduism, just a month before the marriage was solemnized.

Justice Mahesh Chandra Tripathi had referred to a 2014 judgment in Noor Jahan Begum @ Anjali Mishra & Anr. v. State of U.P. & Ors., in which it was observed that conversion just for the purpose of marriage is unacceptable.

Overruling this Judgment and declaring it bad in law, the Allahabad High Court has, on 11th November, specifically observed that "Right to live with a person of his/her choice irrespective of religion professed by them, is intrinsic to right to life and personal liberty."

"We hold the judgments in Noor Jahan and Priyanshi as not laying good law," the Court further ruled.

The Uttar Pradesh Cabinet on Tuesday (24th November) gave its nod to the draft ordinance which makes unlawful religious conversion a non-bailable and cognizable offence [Section 7].

The preamble to the Act Reads - "To provide for prohibition of unlawful conversion from one religion to another by misrepresentation, force, undue influence, coercion, allurement or by any fraudulent means or by marriage and for the matters connected therewith or incidental thereto."

Thereafter, Two PILs were filed in the Allahabad High Court against the controversial ordinance law passed by the UP Government in November this year, to prohibit religious conversions in the name of 'love jihad'.

Earlier, a petition was filed by Advocate Saurabh Kumar, challenging the constitutional validity of the Uttar Pradesh Prohibition of Unlawful Conversion of Religion Ordinance, 2020.

The Allahabad High Court on Friday (18th December) issued notices on a batch of PILs challenging the Uttar Pradesh Prohibition of Unlawful Conversion of Religion Ordinance, 2020- promulgated by the UP Governor in November this year, to prohibit religious conversions in the name of 'love jihad'.

Rulings by other Courts

In the celebrated Judgment of Shakti Vahini v. UOI & others, the Supreme Court of India in the year 2018 held that "when two adults marry out of their volition, they choose their path; they consummate their relationship; they feel that it is their goal and they have the right to do so."

"Any kind of torture or torment or ill-treatment in the name of honour that tantamount to atrophy of choice of an individual relating to love and marriage by any assembly, whatsoever nomenclature it assumes, is illegal and cannot be allowed a moment of existence", the Court further said.

Further, in November 2020, the Karnataka High Court held that the right of any major individual to marry the person of his/her choice is a fundamental right enshrined in the Constitution of India.

A division bench of Justices S Sujata and Sachin Shankar Magadum, while disposing of a habeas corpus petition filed by one Wajeed Khan seeking the release of his lover Ramya from confinement, said:

"It is well settled that a right of any major individual to marry the person of his/her choice is a fundamental right enshrined in the Constitution of India and the said liberty relating to the personal relationships of two individuals cannot be encroached by anybody irrespective of caste or religion."