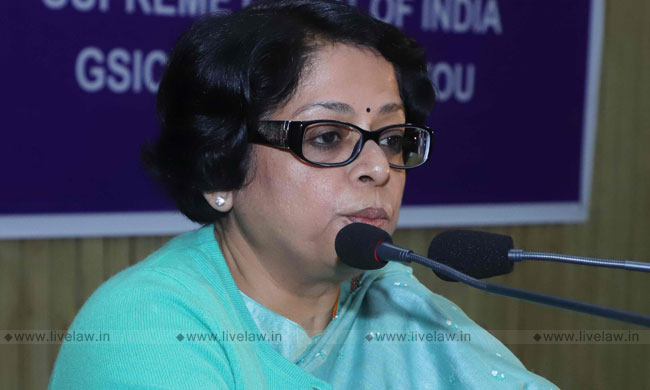 "Even though there is a need for greater representation of women in judicial appointments at all a levels, it has to be merit based and not entirely gender based."

Women are no longer a floating population in the legal profession, who move away from the profession after marriage, said Justice Indu Malhotra in her speech on the occasion of International Women's Day.

The judge was speaking at a function organized by Gender Sensitization and Internal Complaint Committee, Supreme Court of India, in relation to Women's day.

Speaking about Justice Ruma Pal, who was chief guest at the function, the judge said: "She has been a role model judge, and a source of great inspiration to the legal fraternity. She is known to have observed the highest ethical standards as a judge. During her tenure as a judge of the Calcutta High Court, she refused invitations to deliver lectures in foreign countries on two occasions, as the State Government was required to pay for her foreign travel. Justice Pal declined the invitation on both occasions since she felt that if the State government were to sponsor her foreign travel, it may affect her judicial independence, particularly since the State Government was the biggest litigant."

She further said: "As her contemporary, Justice Ruth Bader Ginsburg, Judge of the US Supreme Court said, "When I'm sometimes asked when will there be enough women on the Supreme Court, I say, 'When there are nine'…" It does not mean literally that all the Judges should be women Judges; but the day when there is no distinction between male and female judges, but Judges of the Supreme Court. That is what Justice Ruma Pal epitomised in her distinguished career as a Judge, a role-model example for both men and women judges to follow."

Recollecting her tenure as member of GSICC, she said that there have been several other instances where women lawyers have received lewd messages, and overtures from male colleagues, being stalked in the Supreme Court premises, and outside. There were fake complaints made by women when relationships turned sour, she added.