No Blanket Ban On Exercise Of Writ Jurisdiction By High Court Even When Alternative Remedies Are Available: SC [Read Judgment] 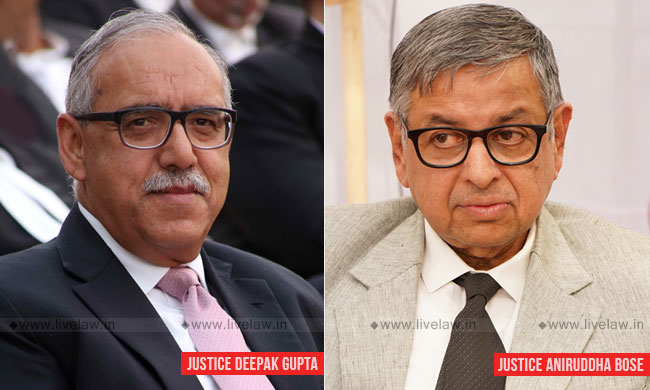 x
"Merely because the Court may not exercise its discretion, is not a ground to hold that it has no jurisdiction."

The rule of alternative remedy is a rule of discretion and not a rule of jurisdiction, the Supreme Court said while reiterating that there cannot be a blanket ban on the exercise of writ jurisdiction by High Courts even when alternative remedies are available. The bench comprising Justice Deepak Gupta and Justice Aniruddha Bose was dealing with a civil appeal against Allahabad High...

The Full bench of the High Court held that such appeals pending immediately prior to the constitution of the Armed Forces Tribunal is not liable to be transferred to the Tribunal.

The contention raised in the appeal was that the AFT virtually substitutes the High Court in so far as matters governed by the Act are concerned, and as such an LPA or Special Appeal. Disagreeing with this, the bench said:

Section 14(1) of the Act quoted hereinabove clearly provides that the AFT will exercise powers of all courts except the Supreme Court or High Court exercising jurisdiction under Article 226 and 227 of the Constitution of India. Section 34 is very carefully worded. It states that 'every suit', or 'other proceedings' pending before any court including a High Court immediately before the establishment of the Tribunal shall stand transferred on that day to the Tribunal. The Legislature has clearly not vested the AFT with the power and jurisdiction of the High Court to be exercised under Article 226 of the Constitution.

It observed that, since an appeal lies to the Supreme Court against an order of the AFT, the High Court may not exercise their extraordinary writ jurisdiction because there is an efficacious alternative remedy available but that does not mean that the jurisdiction of the High Court is taken away. It said:

"It would be pertinent to add that the principle that the High Court should not exercise its extraordinary writ jurisdiction when an efficacious alternative remedy is available, is a rule of prudence and not a rule of law. The writ courts normally refrain from exercising their extraordinary power if the petitioner has an alternative efficacious remedy. The existence of such remedy however does not mean that the jurisdiction of the High Court is ousted. At the same time, it is a well settled principle that such jurisdiction should not be exercised when there is an alternative remedy available . The rule of alternative remedy is a rule of discretion and not a rule of jurisdiction. Merely because the Court may not exercise its discretion, is not a ground to hold that it has no jurisdiction. There may be cases where the High Court would be justified in exercising its writ jurisdiction because of some glaring illegality committed by the AFT. One must also remember that the alternative remedy must be efficacious and in case of a Non­Commissioned Officer (NCO), or a Junior Commissioned Officer (JCO); to expect such a person to approach the Supreme Court in every case may not be justified. It is extremely difficult and beyond the monetary reach of an ordinary litigant to approach the Supreme Court. Therefore, it will be for the High Court to decide in the peculiar facts and circumstances of each case whether it should exercise its extraordinary writ jurisdiction or not. There cannot be a blanket ban on the exercise of such jurisdiction because that would effectively mean that the writ court is denuded of its jurisdiction to entertain such writ petitions which is not the law laid down in L. Chandra Kumar (supra)."

The bench also rejected the contention that an intra court appeal from the judgment of a single judge of the High Court to a Division Bench pending in the High Court is required to be transferred under Section 34 of the Act. It said:

The High Court is a Constitutional Court constituted under Article 214 of the Constitution and are courts of record within the meaning of Article 215. It is obvious that the order of the High Court cannot be challenged before any other forum except the Supreme Court. The provision of intra-­court appeal whether by way of Letters Patents or special enactment is a system that provides for correction of judgments within the High Courts where a judgment rendered by a single judge may be subject to challenge before a Division Bench. This appeal to the Division Bench does not lie in all cases and must be provided for either under the Letters Patent or any other special enactment. Even where such appeal lies the appeal is heard by two or more judges of the High Court. We cannot envisage a situation where an appeal against the order of a sitting judge of the High Court is heard by a Tribunal comprising of one retired judge and one retired Armed Forces official.