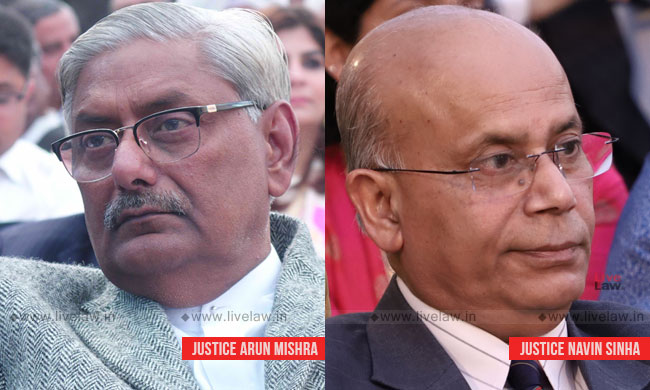 The Supreme Court has held that a writ petition challenging the termination of services of a teacher is maintainable against a private unaided educational institution.The bench of Justices Arun Mishra and Navin Sinha held so while dismissing an appeal by Marwari Balika Vidyalaya, a private school, against a Calcutta High Court judgment, which had directed the reinstatement of a...

The Supreme Court has held that a writ petition challenging the termination of services of a teacher is maintainable against a private unaided educational institution.

The bench of Justices Arun Mishra and Navin Sinha held so while dismissing an appeal by Marwari Balika Vidyalaya, a private school, against a Calcutta High Court judgment, which had directed the reinstatement of a dismissed teacher named Asha Srivastava with back wages by invoking writ jurisdiction under Article 226 of the Constitution of India.

She was dismissed on grounds of 'indiscipline' after she had filed a writ petition in High Court seeking expeditious action on the approval of her appointment.

The prime contention raised by the school was that powers under Article 226 of the Constitution of India could not have been invoked against a private entity.

While dismissing the appeal, the bench referred to the SC decision in Raj Kumar vs Director of Education and others, which had held that approval of the government education authorities was necessary even for dismissal of a private school employee. No such approval was obtained by the school in the instant case before retrenching the teacher.

The bench also referred to the decision in Ramesh Ahluwalia vs State of Punjab, which had held that the employee of a private school can file writ petition in relation to service disputes. According to Ramesh Ahluwalia decision, a school is discharging a 'public function' and hence writ was maintainable against it.

"It is apparent from the aforesaid decisions that the Writ Application is maintainable in such a matter even as against the private unaided educational institutions", observed the bench in the order passed on February 14.

The appellant school had placed reliance on the SC decision in Committee of Management, Delhi Public School & Anr. v. M.K. Gandhi & Ors (2015) 17 SCC 353 which had dismissed a writ filed by a teacher seeking reinstatement as non-maintainable.  However, that decision was distinguished by holding that question of prior approval by government authorities for dismissing a teacher was not involved there.

The decision Satimbla Sharma & Ors. v. St. Paul's Senior Secondary School & Ors referred by the appellant was a case demanding equal pay for private school teachers at par with government teachers. The SC had dismissed that claim holding that equality under Article 14 cannot be raised against a private entity. The next precedent relied by the appellant - Sushmita Basu v Ballgunge Siksha Samity- was a case for equal payment of dearness allowance to private school teachers as given to government school teachers. The SC had rejected that claim observing that writ against a private body cannot be claimed if there is no public law element involved.

The bench distinguished these cases holding that the facts were different.

"In view of the aforesaid discussion, we have no hesitation to hold that the Writ Application is maintainable as rightly held by the Division Bench of the High Court", the Bench said.

It added that the direction to pay back wages was reasonable as the teacher was made to suffer a stigmatic order.

On February 28, the Division Bench of High Court of Kerala had answered a reference to hold that writ petition was not maintainable against a private school in relation to service matters of employees.

The bench of Justices V Chitambaresh and Narayana Pisharadai overruled two single bench decisions - Bincy Raj vs CBSE & Chitra v State of Kerala- which had held that the writ court can review disciplinary action against a CBSE teacher. These decisions had held writ to be maintainable on the ground that education amounted to discharge of a public function.

While the bench acknowledged that a school discharges public function and is therefore an "authority" amenable to writ jurisdiction under Article 226 of the Constitution of India, it said that all actions of the authority cannot be reviewed under writ jurisdiction.

" a judicial review of the action challenged by a party can be had by resort to the writ jurisdiction only if there is a public law element and not to enforce a contract of personal service", observed the High Court.

The High Court had not referred to the SC decision in Marwari Balika Vidyalaya case while answering the reference.