"Does One Become Christian Just By Attending Church Sermon?" AP HC Dismisses Plea Against CM Jagan Mohan Reddy For His Visit To Tirupati Temple 'Being A Non-Hindu' 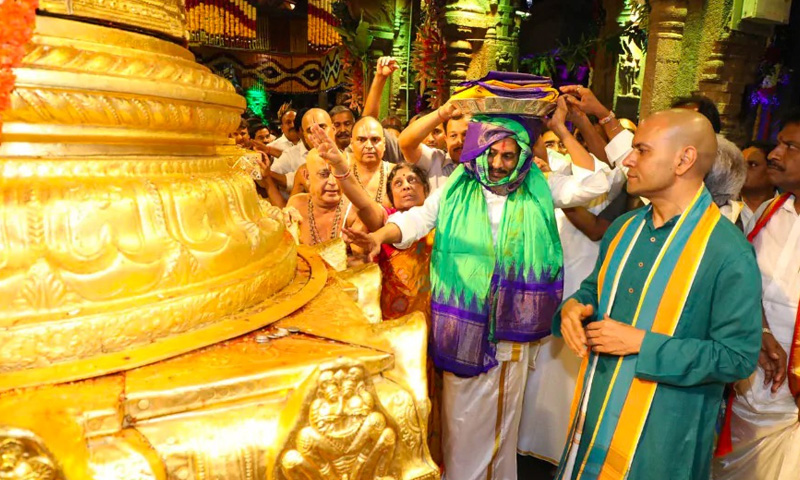 A Single Judge bench headed by Justice Battu Devanand of Andhra Pradesh High Court on Wednesday dismissed writ petition of quo warranto against Andhra Pradesh Chief Minister, Y S Jaganmohan Reddy and other Cabinet Ministers on their visit to Tirumala Tirupati Devasthanam Temple despite being non Hindus and followers of a different religion. The petition was filed requiring the respondents...

A Single Judge bench headed by Justice Battu Devanand of Andhra Pradesh High Court on Wednesday dismissed writ petition of quo warranto against Andhra Pradesh Chief Minister, Y S Jaganmohan Reddy and other Cabinet Ministers on their visit to Tirumala Tirupati Devasthanam Temple despite being non Hindus and followers of a different religion. The petition was filed requiring the respondents to show under what authority are they holding their respective official posts thereby seeking directions on appointment of other competent persons in their place.

Alokam Sudhakar Babu, the petitioner in the case, is a social worker and a follower of Lord Sri Venkateswara Swamy. The genesis of the petition rests on Rule 136 of the Andhra Pradesh Charitable and Hindu Religious Institutions and Endowments Act, 1987 which provides that a precondition of giving a declaration has to be fulfilled by every non Hindu while visiting the temple. The primary grievance of the petitioner is that Y S Jaganmohan Reddy, who is a Christian by religion, has entered the temple without furnishing the required declaration thereby violating the law of the State and he is not entitled to continue in the present post as he is holding.

Arguments of the petitioner:

Observation of the Court:

The bench while interpreting a person's right to freedom of religion under Art. 25 was of the view that "The individual right contained in Article 25 of the Constitution guarantees to every person the freedom of conscience and the right freely to profess, practice and propagate religion subject to public order, health and morality. Therefore, it is clear that subject to the restrictions imposed in the Article 25, every person has a fundamental right under the constitution not merely to entertain such religious belief but to exhibit its belief and ideas as are enjoyed or sanctioned by this religion and further to propagate his religious views for the edification of the others."

Further, the bench interpreted the provisions of the Act dealing with Admission of Non-Hindus into the Tirumala Tirupathi Devasthanams Temples contained in Rule 136 of the Act. While doing so, the Court analyzed the meaning of "professing a religion" and who is a "Hindu". The bench relied on the case of Punjabrao vs. Dr. D.P.Meshram & Ors. (1965) wherein the Supreme Court held that the word professing means to avow publicly; to make an open declaration, to declare one's belief, to profess Christ and to accept into a religious order. On the point of the meaning of being a Hindu, the court relied on Sastri Yagnapurushadji & Ors. v. Muldas Bhudardas Vaishya (1966) where the Court examined the broad features of Hindu religion, after tracing the historical and etymological genesis of the word 'Hindu' to river Sindhu otherwise known Indus.

After analyzing the decisions on the subject, the bench took note of the point that the Supreme Court has described the Hindu religion as a way of life based on certain basic concepts. While considering the meaning of "Professing Christian religion", the bench referred to Sec. 3 of the Indian Christian Marriage Act, 1872 which defines the meaning of Christian and Native Christians. "Any person professing the Christian religion is a Christian for the purpose of the said Act and Christian residence of Natives of India converted to Christianity as well as such converts are classified as Native Christians. Baptism is the sacrament by which a person is admitted into the Church of Christ and it is not only a sign and distinguished mark of the Christian profession." The bench observed.

On Entry of Respondents (Non Hindus) to the Temple

The Court observed that the petitioner failed to show any material evidence on record which establishes that the Respondent (Y S Jaganmohan Reddy) is a professing Christian. Therefore, the allegations of the petitioner were not entertained by the bench. The bench also noted that merely attending the Christian Gospel conventions and attending the prayers in Churches, one cannot be considered as a Christian.

"Recently, the respondent has participated in the prayers in Gurudwara at Vijayawada. Can he be treated as professing the "Sikh" religion? Does one become a "Christian" just by having a biblical name or just by attending a Church sermon? Can one be called as a 'Christian' just because they read the Bible or have the Crucifix in their house? Admittedly, the answer will be negative." The Court observed.

Further, the Court also noted that there is a State tradition from years to invite the serving Chief Ministers for offering prayers to Tirumala Tirupathi Devasthanams temples to present "Pattu Vastralu" during Brahmotsavam as per the procedure provided under "Kainkarya Patti". "In the opinion of this Court, he entered into the Tirumala Tirupathi Devasthanam's temples, in the capacity of the Chief Minister of the State, as a representative of the people of the state, and as such, he need not submit a declaration as provided under Rule 136 of the Rules." The court held.

However, the bench clarified that if the respondent visits the temple in his personal capacity, it shall be mandatory for him to submit the declaration under the Rule.

The Bench dismissed the petition and did not go into the allegations made by the petitioners due to the failure of producing any backing evidence.