'You Misinterpreted Our Order' : Supreme Court To Allahabad HC For Creating Only Sessions Courts For Cases Against MP/MLAs 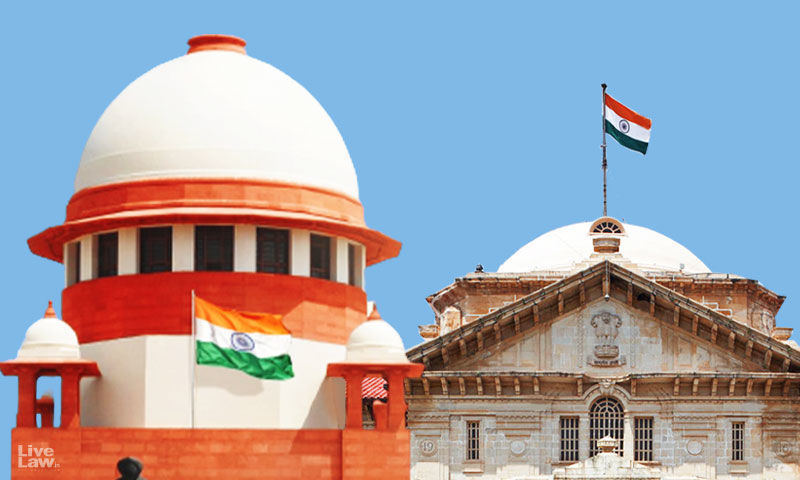 The Supreme Court on Wednesday orally remarked that the Allahabad High Court misinterpreted the Top Court's order by not creating Magisterial Courts for trying cases against MPs/MLAs and by designating only Sessions Courts for such purposes.

A bench comprising the Chief Justice of India NV Ramana, Justice DY Chandrachud and Justice Surya Kant was hearing the applications filed by SP leader Azam Khan challenging the notification dated 16.08.209 issued by the Allahabad High Court by which cases triable by Magistrates are transferred to the Special Court headed by an officer of the rank of Additional Sessions Judge.

Responding to a query raised by the bench, the counsel appearing for the Allahabad High Court submitted that nearly 13,000 cases are pending in the State of Uttar Pradesh against sitting and former MPs and MLAs and 63 Special Courts have been created to try them. The Special Courts are created at the Sessions Level and not at the Magistrate level. When the bench asked the reason for this, the counsel replied that it was done as per the orders passed by the Supreme Court.

"Don't misinterpret our orders. We know what our orders are. We allowed creation of Magisterial Courts also as required", the Chief Justice of India told the High Court's counsel.

"You have not created any special courts and have only put a label to sessions judges! If you don't create Magisterial Courts, and give the cases to in-charge Sessions Judge, for how many years the cases will drag on? Was it our intention?", the CJI asked.

"Our order was clear, to constitute as much sessions courts and magisterial courts as deemed fit", Justice Chandrachud pointed out.

"We just want to say one thing. You have misinterpreted our order", the CJI told the High Court's counsel.

The bench asked the counsel to read the order passed by the Supreme Court on September 16, 2020 in the Ashwini Upadhyay case.

The CJI asked if other states have created Magistrate level court. The amicus curiae in the matter, Senior Advocate Vijay Hansaria, informed that in States like Madhya Pradesh, Karnataka and West Bengal, there is one Magistrate designated as the Special Court for cases against MPs/MLAs.

Earlier, Senior Advocate Kapil Sibal, appearing for Azam Khan, had argued that the transferring of cases triable by Magistrates to the Sessions Court was in violation of the procedure established by law.

He highlighted the following points :

Sibal relied on the precedents State of West Bengal v Anwar Ali Sarkar 1952 SCR 284, A.R. Antulay vs R.S. Nayak to buttress his arguments. Sibal said that more than the losing of the right to appeal, his emphasis was on the violation of right to equality. There is no dispute that Special Courts can be created for a class of offences or offender, but the jurisdiction must be as conferred by the statute, Sibal argued.

Amicus Curiae Vijay Hansaria has submitted a report stating that it was not illegal to allow Special Courts at Sessions Level to handle cases triable by Magistrates. He pointed out that in 2G scam cases and coal block cases, the Supreme Court had transferred the cases to Special Courts. The Amicus argued that the right to appeal was not lost, as appeal lies to the High Court from the Sessions Court.

Additional Solicitor General SV Raju argued that Magistrate doesn't have exclusive jurisdiction as per the code. To buttress this argument, the ASG cited Section 323 CrPC, as per which ca Magistrate himself can transfer a case to sessions court. The ASG also referred to Section 228 CrPC.

"There was a direction by us, to create special courts at Magistrate level. How will you justify that in UP alone, cases are tried by Sessions Judge?", the CJI asked the ASG.

"On the question of discrimination, I can understand discrimination if two persons from UP are treated differently. There can be distinction on geographical basis", the ASG replied.

"The IPC applies to entire country! These offences are IPC offences", the CJI responded. In response, the ASG pointed out that Uttar Pradesh did not have the provision for anticipatory bail for a long time, though it was available in other states.

"The problem is, we're not bothered with UP alone, we've to think about all of India. We've taken up this case regarding entire country for public representatives involved in these cases. We must follow same pattern of procedure in these cases", the CJI said.

The Supreme Court passed the orders for constitution of Special Courts to try cases against legislators in a PIL filed Ashwini Kumar Upadhyay in 2016, seeking life ban on convicted politicians from contesting elections.