YSRCP MP Krishna Raju Has Called Upon People Of Different Castes/Religions To Kill Each Other : AP Govt Tells Supreme Court 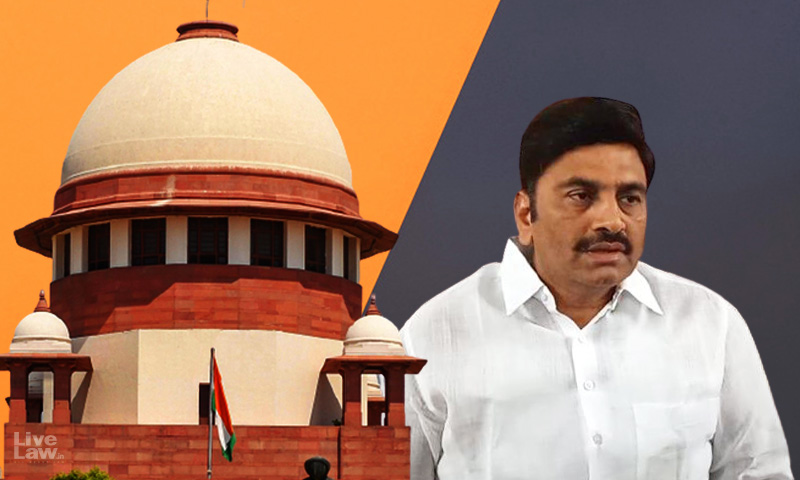 x
The Andhra Pradesh Government has filed an affidavit opposing Raju's bail in the sedition case taken against him.

"Petitioner has not even fallen short of calling upon people of different castes/religions to kill each other", the State of Andhra Pradesh told the Supreme Court in YSR Congress Member of Parliament (MP) K. Raghu Rama Krishnam Raju's plea against Andhra Pradesh High Court's order which refused to entertain his bail application. Raju was arrested on May 14 on charges of sedition and promotion...

"Petitioner has not even fallen short of calling upon people of different castes/religions to kill each other", the State of Andhra Pradesh told the Supreme Court in YSR Congress Member of Parliament (MP) K. Raghu Rama Krishnam Raju's plea against Andhra Pradesh High Court's order which refused to entertain his bail application.

Raju was arrested on May 14 on charges of sedition and promotion of communal hatred over his critical remarks against the ruling party in State of Andhra Pradesh and was taken to the Crime Investigation Department (CID) office in Guntur district.

On May 15, the Andhra Pradesh High Court had refused to entertain his bail application saying that he should approach the Sessions Court first.

In the affidavit filed by the Andhra Pradesh Government opposing the plea filed by Raju, the State has submitted that being an MP, Raju has "consistently and consciously and with a mala fide intent, abused his authority/reach as a public person with the sole intention of creating enmity between various class of citizens and to excite disaffection towards the Government".

The Affidavit goes on to highlight that a bare viewing of the videos shared on social media exhibit that the incendiary speeches by Raju are not a one-time slip or an error of judgment, but "have been made in furtherance of a deliberate design and a conspiracy hatched by several individuals including the Petitioner herein to create unrest in the State by dividing people on the basis of caste and religion". The Affidavit further reproduces multiple statements to showcase the same.

"A bare perusal of the aforesaid statements would reveal that the same can, by no stretch of imagination, be said to be an exercise of the right to freedom of expression. Indeed, in his design to create a wedge amongst people and thereby create unrest in the State, the Petitioner has even gone to the extent of encouraging one group of persons for not only beating but also killing persons from other group."

Acknowledging that the MP has an inalienable right to criticize the Government, it has been contended that the right cannot be extended to creating a situation where public order is disturbed and that the statements made by the MP should not be tolerated in any civilized society.

The Affidavit refers to various cases as Hardik Patel v. State of Gujarat, Akhil Gogoi v. NIA, Gautam Navlakha v. NIA and Sudha Bhardwaj v. NIA, to highlight that the Apex Court has, on several occasions, refused to exercise its discretion when charges of sedition are involved.

It has additionally been averred that it is a settled position of law that the police can register an offence suo moto and that the State was constrained to initiate appropriate action when it was realized that the words and actions of the MP were manifesting into actual incidents of violence, thereby creating disharmony between various classes of citizens.

"The State had no option but to take action. The arrest was not a knee jerk reaction, as is clearly reflected from the fact that such statements have been consistently made over a period of one year. The Statements made by the Petitioner were thoroughly examined. It is only thereafter that the FIR was registered. The Petitioner cannot be heard to say that the State ought to have waited with folded hands till an actual complaint was filed".

The Affidavit also submits that the Petitioner "has not even fallen short of calling upon people of different castes/religions to kill each other" and that he cannot be permitted to use his status as an MP to claim any immunity as being an elected representative bestows upon him a higher level of responsibility.

The Andhra Pradesh Government has also refuted the allegations of police torture, contending that they "have been made pursuant to a design and are aimed solely to create a euphoria around the arrest".

The Affidavit concludes on the note that the Police Department of the State works in a completely unbiased and impartial manner, and that they were constrained to take action only after becoming cognizant of the disastrous effects of the statements of the MP.

On May 17, a Supreme Court Bench of Justices Vineet Saran and BR Gavai directed the MP to be taken to Army Hospital, Secunderabad for medical examination with respect to allegations of custodial torture. The order was passed after the Court took note of the fact that the Magistrate had noticed injuries on the feet of the MP and that he had undergone a heart surgery last year.