"Case That Was Decisively Closed Has Been Reopened For Misusing Power"; Arnab Goswami In His Habeas Plea Before Bombay High Court 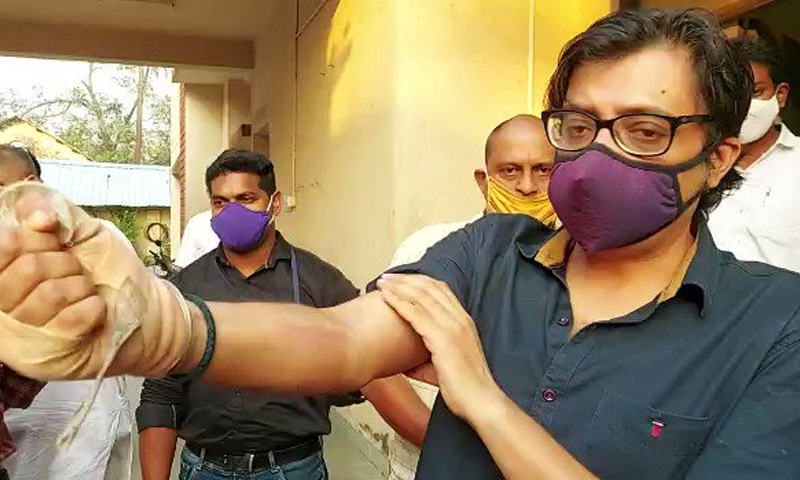 Republic TV Chief Arnab Goswami has filed a habeas corpus petition before the Bombay High Court challenging his 'illegal arrest' and 'wrongful detention' by Mumbai police yesterday in relation to an FIR registered at Alibag Police Station, Raigad for the alleged abetment to suicide of interior designer Anvay Naik.Goswami was arrested early in the morning from his residence yesterday by...

Republic TV Chief Arnab Goswami has filed a habeas corpus petition before the Bombay High Court challenging his 'illegal arrest' and 'wrongful detention' by Mumbai police yesterday in relation to an FIR registered at Alibag Police Station, Raigad for the alleged abetment to suicide of interior designer Anvay Naik.

Goswami was arrested early in the morning from his residence yesterday by Raigad police. It is alleged that Anvay Naik left a suicide note in English stating that he and his mother have decided to commit suicide because of non-payment of dues to Concorde Designs Pvt Ltd (CDPL), of which both were directors. They have specified in the said note that the following people have not cleared his dues- Arnab Goswami of Republic TV, Feroz Shaikh of IcastX/Skimedia and Niteish Sarda of Smartworks.

According to the complaint against Goswami, CDPL had executed interior works for Republic TV and an amount of Rs 83 lakh was due from Goswami and ARG Outlier Media Pvt Ltd (parent company of Republic TV).

However, in his plea, Goswami has argued that over 90% of the amounts due to the deceased's company as per the terms of the contract.

Moreover, calling his own arrest an act of revenge and vengeance by those in power in Maharashtra, the petition states-

"It is shocking that a case that was decisively closed has been reopened with the sole purpose of misusing power, concocting facts and forcefully arresting the Petitioner in a prima facie act of revenge and vengeance for his news coverage which questioned those in power in the State of Maharashtra. The Petitioner has been assaulted by the Respondent No. 2, and has been wrongly and illegally arrested in a motivated, false and closed case. This is another attempt of the political witch-hunt and vendetta politics against the Petitioner and his channel."

Arnab has submitted that the wife of the deceased, Akshata Naik, had approached the officials of ARG for the release of money to the debtors of CDPL as the company was in huge debt. The plea contends-

"Repeated attempts were made by ARG Outlier Media Pvt Ltd to make the balance payment to CDPL, for full and final settlement of all claims. However, in the absence of any shareholder or director in CDPL, such attempts to make the balance payment has been infructuous. Despite multiple meetings, emails, letters and whatsapp messages reaching out to CDPL, Mrs. Akshata Naik, and Ms. Adnya Naik regarding ARG Outlier Media Pvt. Ltd's willingness to ensure a full and final settlement, no concrete response has been received. In fact, the entire balance due was transferred to the bank account of CDPL in July 2019, but was returned because the account is inoperative."

Calling the suicide an 'unfortunate incident', Goswami has alleged that the next day after the suicide i.e., on May 6, 2018, some officers of the Alibag Police station had visited him at ARG's office and informed him about the incident. He was further informed that a FIR had been registered in relation to the matter and the deceased had left behind a note, wherein it was stated that the deceased was committing suicide on account of the non-payment of CDPLs dues. The petitioner was also informed that his name had been mentioned in the note left by the deceased.

As the name of the Petitioner was mentioned in the note, the police had questioned him regarding the transactions between ARG and CDPL. The petitioner claims to have provided all necessary and available details to the police officers and also assured them of his full cooperation during the course of the investigation.

In December 2016, ARG awarded a contract for civil and interior works of its news studio at the Bombay Dyeing Compound in Lower Parel, Mumbai to Concorde. Several issues arose during the execution of the works under the Work Orders. Concorde was unable to meet the dates set for completion of works on several occasions. Additionally, several defects in the works were also discovered by ARG. As an example, the petitioner alleged that on April 29, 2017, a major electrical failure occurred due to overheating of an electrical circuit (which was within the scope of work and the responsibility of Concorde). A further MCB fault occurred on December 27, 2017.

"All payments legitimately due and payable to Concorde were made by ARG in terms of the Work Orders. However, due to the defects and other breaches of the Work Orders, the last three instalments (as set out in ARG's email dated 28 August 2017) were withheld till the rectification of such defects in 10 accordance with the terms agreed to between the parties in the Work Orders" the plea states.

Refuting the claim of Rs.83 lakhs in dues to CDPL, Arnab has contended in the plea that only Rs.39 lakh is owed and several meetings have been conducted with Ananya Naik, wife of the deceased.

Goswami has also referred to the discussions in Maharashtra Legislative Assembly which took place on the floor of the house when a show cause notice was served to him on September 16.

"The desperation of the political machinery to falsely implicate the Petitioner in connection with FIR No. 59 of 2018 and to reopen the matter is evident in the said discussions. In the debates, one Mr. Sunil Prabhu and Mr. Chhagan Bhujbal have requested Mr. Anil Deshmukh (Home Minister in ruling coalition 4 government) to explain what has been done in case of "Mr. Anvay Naik" (Deceased) who apparently had committed suicide. The Home Minister promptly obliges by implicating Petitioner with this alleged suicide by stating that this suicide is committed because Petitioner did not pay his dues for interior decoration of Petitioner's studio. No wonder, the Home Minister assures the House that matter will be thoroughly investigated."

This despite the fact that the investigation was closed after thorough enquiry and the order dated April 16, 2019 passed by the competent Court i.e. the Chief Judicial Magistrate, Raigad, Alibaug, petition contends.

Finally, apart from quashing of FIR against him, the plea also seeks his immediate release.