"We Are A Team, Looking For A Harmonious Relationship Between Judiciary, Executive & Legislature": Law Minister Kiren Rijiju 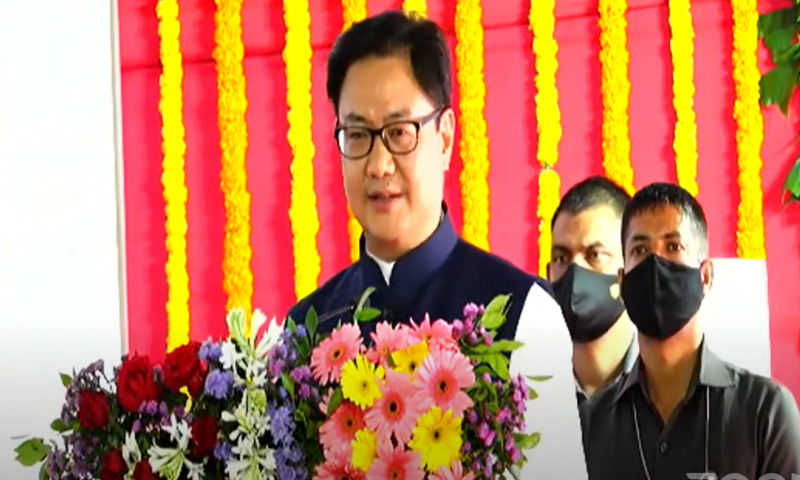 "I am looking for a harmonious relationship between the judiciary, executive and the legislature. We all are working for our nation. We are a team. We are just different organs of our system, our state", Kiren Rijiju, Union Law Minister, said on Saturday. "We know we have a responsibility in the government of India to ensure that the judiciary is not only given full support but also...

"I am looking for a harmonious relationship between the judiciary, executive and the legislature. We all are working for our nation. We are a team. We are just different organs of our system, our state",  Kiren Rijiju, Union Law Minister, said on Saturday.

"We know we have a responsibility in the government of India to ensure that the judiciary is not only given full support but also give space for the judiciary to become robust. To make our democracy successful, a robust judiciary is of utmost importance", he added.

He was speaking at the Inaugural Function of 'B' & 'C' Wings of the High Court Annexe Building of Bombay High Court, Bench at Aurangabad.
He told that the government has taken many decisions to ensure that they provide support to the infrastructure of the judiciary which, he said, is the core. "I know very well that judges have their own challenges and difficulties but I also know that many people do not know the real life of a judge, how he manages his time, the cases and the pressure. It is very important to understand that. Once we understand the problems of the judiciary, I think we can take corrective steps to ensure that all the support systems are managed and put in place. The infrastructure becomes very important".

He told that in the last cabinet meeting, they have taken various important steps- "We decided to sanction 9000 crores for the development of the infrastructure of the lower judiciary. That amount will be pooled together between the central government and state governments. Central government will provide 5300 crores and the purpose for which this budget was sanctioned is for the construction of 3800 court halls and 4000 residential units for the judicial officers in all district and subordinate courts. We have made provision for 1450 lawyer halls again in district and subordinate courts with an expenditure of over 700 crores. There will be 1415 toilet complexes and 3800 digital computer rooms. We have provided some monetary provisions for gram nyayalayas, the lowest courts. We have an opinion that for the gram Nyayalaya, state government should take full charge. So maybe next year when we take a decision we will take a call but for this year we have sanctioned certain amount"

Stating that videoconferencing has emerged as the mainstay of the court, he continued to commend, "Today, in the presence of CJI and all the Supreme Court judges, let me mention that when I was addressing one of these international conferences, I told the story of the leadership role the Supreme Court of India has taken to ensure the justice delivery in this pandemic. District courts heard 97 lakh cases while the High Courts heard 51 lakh cases. The Supreme Court emerged as the golden leader with over 96,000 virtual hearings till July 9"

"An updated cloud-based VC infrastructure system with latest features and robust securities is also being developed by the NIC as a part of the Aatma Nirbhar Bharat App challenge. Indian-made video conferencing app 'Bharat VC' has been shortlisted and is still under trial for use as a uniform video conferencing platform. One video conferencing equipment each has been provided to all court complexes including taluka level courts and additional funds have been sanctioned for additional VC equipment for 14,000 courtrooms", he told.

"Digital India is the mainstay and in the process, digital judiciary will also be equally important. This digital thing is something that I have taken responsibility for as the minister within my ministry", he stated.

He continued to discuss the E-Court Integrated Mission Mode Project which, he said, was launched with the objective of improving access to justice using technology- "Under this very ambitious project, 18,000 courts across the country have been computerised so far. Through the national judicial data grid, litigants today can access case status information of 19.43 crore cases and more than 15.5 crore orders and judgements, making their experiences of interaction with the judicial process seamless and hasslefree. 15 virtual courts have been set up at various locations"

Mr. Rijiju spoke of digitisation of court records- "The other day I visited the Supreme Court complex for the first time. I visited the central agency segment which is part of my ministry's extension which deals with the Supreme Court cases. And when I entered the room, there were tons and tons of files and papers. All the rooms are occupied with the papers and I was told that these are all ongoing cases and all the papers are relevant because all are live cases. I immediately gave the order that these papers must be digitised. We can not afford to occupy such precious and beautiful spaces with papers. This is not only a commitment but a compulsion, we must do it. I am very happy that the Supreme Court and High Courts have taken a big leap on this matter"

"I was also delighted by the amount of effort put by the team, the judiciary and the government, through legal services authorities to reach out to the nook and corner of the country. And we have seen how legal aid and awareness is being created. The only issue is that the legal services to the needy people should not be a poor legal service, it must be quality legal service. And together we can definitely make some deep impact. I am going to Jammu and Kashmir on October 29 for the purpose of overseeing and understanding how legal aid and legal awareness are being provided to the last-mile person standing there in the border areas. I had a discussion with the Lieutenant Governor of Jammu and Kashmir and CJ of the High Court. I want to see the same across the country", he expressed.

Mr. Rijiju conceded that while so much of effort is being made, they are not being equally publicised- "Before I came to this ministry, I was also not aware of so much of what was being done. So we must tell the people of the country that so much work is being done and that it is the citizens' right and our duty to ensure that"
'I am looking forward to the harmonious relationship between the Judiciary and the Executive and the Legislature'
"Right from the beginning, I had always felt for a common man, for a citizen,that he or she should not struggle to get simple justice. Now it is the responsibility of all of us to ensure that the gap between justice and government must be reduced as much as possible. We can do it. We know we have constraints, there are difficulties, the circumstances are also different from place to place and from situation to situation, but if we put in a genuine effort, we can do it. We can mitigate the problems, we can reduce the time taken, we can reduce the delay. Of course, as the largest democratic country in the world, we have many challenges and we have limitations. As the law minister, if I commit something, I know it is not easy to deliver on the promises I have made, but still if a genuine effort is put on, we can definitely make some advancement", said Mr. Rijiju.

"I am also looking forward to the harmonious relationship between the Judiciary and the Executive and the Legislature. We are all working for one nation, we are all committed to giving justice to the people of this great nation, we are a team. We are different organs of our set up, our system, our State, but we are one. I will always consider myself as a member of the team", he expressed.
'Politics is the essence of democracy, but when it comes to the judiciary, there is no politics'

"Politics is always there because politics is the essence of democracy, but when it comes to the judiciary, there is no politics. My friend Devendra Fadnavis (former Maharashtra CM in the BJP-led government) laid the foundation for this new building of the Aurangabad bench of the Bombay High Court and today, Shri Uddhav Thackeray (incumbent CM) is part of its inauguration. This is the teamwork and team spirit!", he said.

"This morning I had a discussion with some of our law officers and advocates and I realised that the Aurangabad bench is very, very important. It has a huge scope for development also. It is a big bench, bigger than many high courts in India. Many judges who had served here have discussed their experiences but I am yet to discuss with any of the sitting judges. Looking at this beautiful annexe High Court building, I was equally thrilled that it is a huge space and with that kind of corridor to work in this Aurangabad bench of the Bombay High Court, you will get the confidence that this is a nice building where we have come for justice or we sit here to provide justice", he concluded.
The Chief Justice of India NV Ramana, Supreme Court judges Justices UU Lalit, DY Chandrachud, BR Gavai and Abhay Sreeniwas Oka also spoke during the event. The Chief Justice of Bombay High Court Dipankar Dutta, and Chief Minister of Maharashtra Uddhav Thackarey also gave special address.
Also Read : Courts In India Have Repeatedly Upheld Rights & Freedoms Of Individuals : CJI Ramana

'Citizens Are Entitled To Know What Goes On In The Court', Justice DY Chandrachud On Live-Streaming Of Court Proceedings