The Uninformed Debate Over The Uniform Civil Code 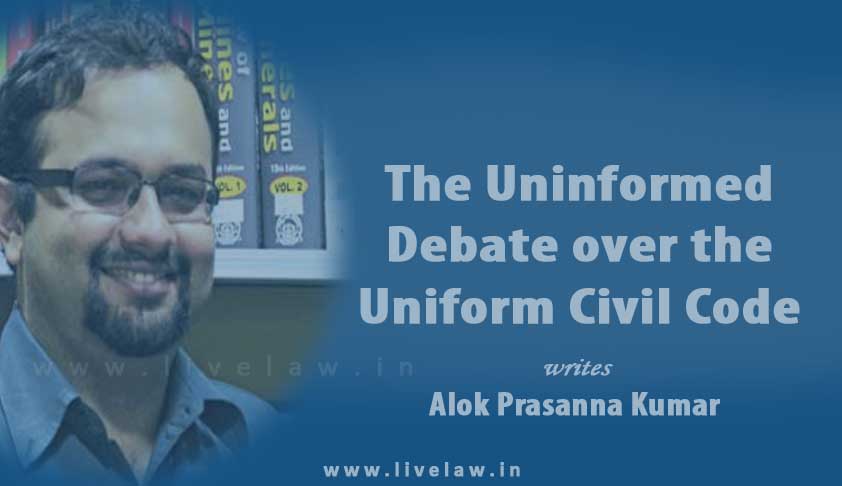 The Uniform Civil Code “debate” can hardly be described as one. It is a debate where even those in favour of it have not been able to come up with a clear and coherent definition of what they mean by the “Uniform Civil Code”. Even those proposing seem to have very different ideas as to what a Uniform Civil Code is. As I pointed out in a recent article, a UCC can be anything from...

The Uniform Civil Code “debate” can hardly be described as one. It is a debate where even those in favour of it have not been able to come up with a clear and coherent definition of what they mean by the “Uniform Civil Code”. Even those proposing seem to have very different ideas as to what a Uniform Civil Code is. As I pointed out in a recent article, a UCC can be anything from a comprehensive, all encompassing complete code governing every aspect of personal laws, abolishing all religious and customary practices, or it could be a simple two line amendment. It need not even be a compulsory law, but just an alternate to current religious and customary laws. With no draft or concrete set of principles to clarify what the UCC is, assumptions have been made on the basis of who is asking for it.

The reference to the Law Commission made by the Law Minister earlier this year was a chance to get some proper clarity on this and have a more informed debate on the proposal. Unfortunately, the questionnaire circulated by the Law Commission (in Hindi and English only) is quite unlikely given the problems with the way it has been structured and drafted.

For a start, in the absence of a consultation paper accompanying the questionnaire, it is difficult for the layperson (who is also asked for her opinions on this) to give any informed feedback to the Law Commission on this matter. The Telecom Regulatory Authority of India, for instance, calls for public consultations along with a paper which outlines the regulator’s own thinking and current state of debate/knowledge on the matter. (For instance the one on “net neutrality”) With even the Law Commission refusing to set out its thinking or the positions taken in academic literature and in the press, it is difficult for the layperson to respond suitably to this. The Law Commission does not seem to have any independent conception of what it means by “uniformity” in law and it is unclear how it expects to have any further clarity on the basis of this questionnaire.

It is entirely opaque as to what purpose the questionnaire is supposed to serve: is it an opinion poll? Is it a public consultation seeking informed views? Is it an attempt to arrive at a consensus on what a uniform civil code should be? The matter is complicated by the fact that the Law Commission has not set out what it means by a “Uniform Civil Code” and leaves it to the respondent to the survey to pick from a menu of choices. It also requires the respondent to be well versed in all areas of personal law, including Hindu Code, sharia law, Christian and Paris personal laws. In the middle, it also adds in a question here and there about specific practices that require reform, further muddling the issue of reform of personal laws and the Uniform Civil Code.

These are all issues which require serious debate in the context of the Uniform Civil Code which is touted as “One Country, One Law”. For a country as incredibly diverse and containing so many divisions as India, it is an open question as to whether “one country, one law” is even desirable. There is of course need to make uniform several aspects of our law, notably, the age of consent for marriage and sex but there is no reason why that should be force fit in the context of a uniform civil code when it is something to be decided in the framework of psychology, medicine, and individual rights. Likewise, the issue of Hindu Succession laws should be discussed in the larger context of land reform in India and agricultural distress, and not be force fit it into some arbitrarily created norm of “uniformity”.

Uniformity should not be confused with equality. The classic example of this is a law which prohibits both the rich and poor from sleeping in park benches. It’s “uniform” but it also harshly impacts one section of society over the other. If equality is the goal, then there should be articulation as to what the “Uniform Civil Code” means for all women, and not just Muslim women. The complete silence over the need for reform of Hindu law, as though it presents the apotheosis of equality and gender justice, raises suspicions as to the actual agenda of those advocating an undefined Uniform Civil Code.

All the same, the movement for reform of Islamic law, being led by various groups protecting the rights of Muslim women should not be allowed to be high-jacked by uninformed and majoritarian impulses. There is a solid legal argument to be made that courts should not enforce such unilateral talaq within the context of India’s constitution. The merits of this, and what it implications it has for the wider reform of Islamic personal law, a strong demand from Muslim women in India, is what should be the focus of public discussion and debate, and not a spurious and uninformed “debate” that is what we are currently seeing.

Alok Prasanna Kumar is an Advocate and Visiting Fellow of the Vidhi Centre for Legal Policy. Views expressed here are entirely his own.