We Have Not Reached The Point Where Men Need Protection From Women: Justice Hima Kohli 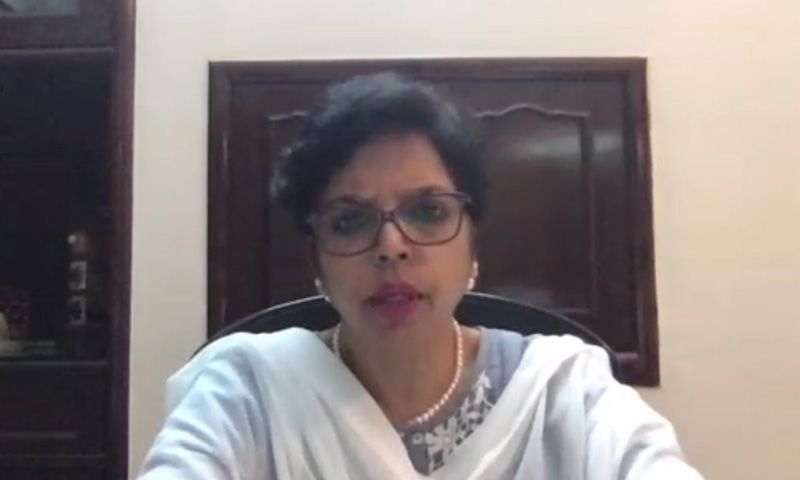 x
"In our society, we haven't reached the point where men have needed protection from women. If there comes a time that women have an upper hand, then we will come to amending the laws. I am not saying that there is no misuse. But, this cannot be a ground to throw out the law. We can do as much as we can to nip the misuse at the bud. However, there is no denying that the power structure is in favour of men.", Justice Hima Kohli said.

The Association of ILI Alumni and the Indian Law Institute conducted a webinar on Domestic Violence During Lockdown: An Invisible Pandemic. The webinar was presided over by Hon'ble Ms. Justice Hima Kohli of Delhi High Court, and Smt. Rekha Sharma, the Chairperson of National Commission of Women. The moderator of the webinar was Dr. P. Puneeth, Associate Professor at JNU, Delhi.Justice...

The Association of ILI Alumni and the Indian Law Institute conducted a webinar on Domestic Violence During Lockdown: An Invisible Pandemic. The webinar was presided over by Hon'ble Ms. Justice Hima Kohli of Delhi High Court, and Smt. Rekha Sharma, the Chairperson of National Commission of Women. The moderator of the webinar was Dr. P. Puneeth, Associate Professor at JNU, Delhi.

Justice Hima Kohli commenced the discussion with the observation that the pandemic had led to women of the household working doubly hard. They were faced with barriers steeped in gender bias and this crisis was a "shadow pandemic". She further observed that women in India were reluctant to seek for help from various quarters in cases of domestic violence due to notions of insulting the honour of the family.

Justice Kohli, being the Executive Chairperson of the Delhi State Legal Services Authority (DSLSA), apprised the audience of the steps taken by DSLSA to tackle the issue of domestic violence, which had increased during the lockdown. Helpdesks have been set up at night shelters, police stations and other public places wherein legal aid lawyers are present to provide counselling through video conferencing.

There also helplines wherein even a mere missed call/SMS/WhatsApp message is sufficient to make the lawyers reach out to those in need of help. However, these lawyers have been sensitized to approach such matters with caution so as to not aggravate an already volatile situation.

DSLSA has further collaborated with Mother Dairy booths, pharmacists and chemists throughout the city of Delhi in order to ensure that booth managers can remain wary to instances of violence in their locality, and accordingly forward any information to DSLSA. Additionally, anganwadi and ASHA workers had also been roped in.

When asked about whether the majority of the complaints came from the lower strata of society, Justice Kohli denied the same by stating that "when it comes to domestic violence, it is not just limited to those living on the fringe of society. It is prevalent across all strata. Money or the professional competence of a woman, surprisingly, does not factor in".

She raised the issue of how women who were financially competent were more reluctant to step out and complain due to their aversion to airing dirty laundry in public. There was also the issue of women who had shifted to other cities to eke out a living who were facing worse problems as they had no alternatives in case they wanted to move out of their shared homes.

Regarding the adequacy of statutory provisions such as Section 498A of the Indian Penal Code or The Protection of Women from Domestic Violence Act, 2005, in providing protection to women, Justice Kohli stated that there were no gaps in the provisions itself. However, the inability to implement the provisions struck at the root of the problem.

"What is required is strict implementation, and this requires further outreach. We need to make the women aware, we need to help them access it. There is no use of statutes, if women have no access to it."

She further informed the audience that a victim of domestic violence would knock on the doors of the Court as a last resort; majority of women would first try to save their relationships and their homes. In this context, there was an urgent need for counselling for the women as well as their children.

When asked about what steps could be taken to ensure faster remedy, Justice Kohli said that there were Protection Officers who could provide relief. However, the fact of the matter is that there is a system in law which has to be followed. Applications could, however, be filed for urgent hearings.

"J&K HC and Delhi HC have taken up petitions on domestic violence during the lockdown. On 24th April, a detailed Order was rendered by the Delhi HC to allow passes to Protection Officers and to ensure immediate action was taken to address issues of the victim".

"In our society, we haven't reached the point where men have needed protection from women. If there comes a time that women have an upper hand, then we will come to amending the laws. I am not saying that there is no misuse. But, this cannot be a ground to throw out the law. We can do as much as we can to nip the misuse at the bud. However, there is no denying that the power structure is in favour of men."

Smt. Rekha Sharma, on the other hand, observed that instances of domestic violence had increased due to women's lack of accessibility to aid as a result of being confined with their abusers during the lockdown. She further stated that these women were unable to contact helpline numbers or reach out for help because they were under close observation by their abusers.

She provided some statistics regarding the number of domestic violence cases that had cropped up during the lockdown.

"From March 21st to June 7th, the number of cases we have received are 1665. Most of the cases came from Uttar Pradesh, while Delhi was at number 2. The figure was almost double from before."

Sharma brought certain enlightening issues to the fore. She stated that the issue with domestic violence was that, first, women were not even aware that they were victims as they were used to the violence. Women in Indian society have majorly grown up seeing their mothers getting abused, and this led to the act of domestic violence getting normalized. Secondly, the lockdown had confined women with their abusers, which invariably meant that the woman's ability to reach out for help had been severely limited.


"The most difficult issue here is that many of the victims are not aware that they are victims. It's a case of Stockholm Syndrome and these women have seen abusive behavior being normalized. They in fact deter others from intervening as it is a 'personal issue'."

Mental health had also taken a beating during the lockdown period, stated Sharma. She further elaborated that the lockdown had increased the burden on the woman's shoulders, with regard to lack of domestic help, children staying at home, no steady income coming in et al. There was also the issue of women not being able to open up about their mental health. However, the NCW had set up a helpline to combat this as well as developed an app to help victims.

With regard to reports about hospitals refusing to admit pregnant women, Sharma informed that NCW had taken suo moto cognizance of the issue.

"Yesterday, I wrote a letter to the Home Minister that special ambulances should be provided and that there should be beds available for pregnant women. However, there is somehow also the reluctance in getting admitted in hospitals due to COVID".

Sharma also highlighted the role of the family in helping a woman face her abuser. She implored the audience that instead of pressurizing their daughters into getting married, parents should focus on making them self-reliant and self-sufficient with the ability to take their own decisions.


"We need to change the mindset of parents. If that changes, everything will change. If you watch 'Thappad', it should be ingrained that even one slap should not be tolerated. Issues are always there, but people should talk it out. There is no requirement to shout or resort to physical violence".

Sharma further commended the initiatives that had been taken by NGOs to reach out to victims of violence; NGOs have been conducting webinars and counselling sessions to increase awareness. There have been sessions on Facebook Live which have garnered a lot of views and have helped women.

In the same light, she condemned the detrimental acts by men's rights' groups who had been raising frivolous allegations against NCW for its biased stance towards daughters-in-law and commented that they merely had too much time on their hands due to the lockdown.

On that note, the webinar came to an end.