[Breaking] Suo Moto Extension Of Limitation Or Lockdown Will Not Affect Right Of Accused To Default Bail : SC 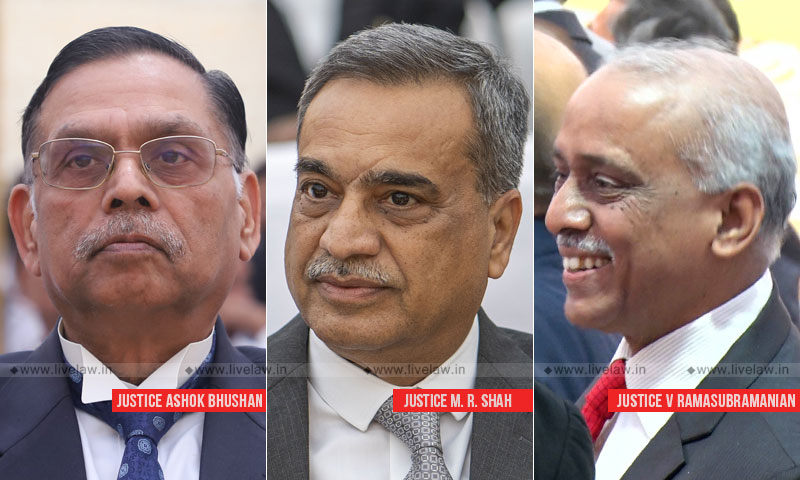 x
'The order of this Court dated 23.03.2020 never meant to curtail any provision of Code of Criminal Procedure or any other statute which was enacted to protect the Personal Liberty of a person'.

The Supreme Court held that its suo moto order extending limitation and the lockdown restrictions of the government will not affect the right of an accused to seek default bail under Section 167(2) of the Code of Criminal Procedure.Holding thus, a bench comprising Justices Ashok Bhushan, M R Shah and V Ramasubramanian set aside the judgment of a single bench of the Madras High Court in S Kasi...

The Supreme Court held that its suo moto order extending limitation and the lockdown restrictions of the government will not affect the right of an accused to seek default bail under Section 167(2) of the Code of Criminal Procedure.

Holding thus, a bench comprising Justices Ashok Bhushan, M R Shah and V Ramasubramanian set aside the judgment of a single bench of the Madras High Court in S Kasi v State through the Inspector of Police, which had held the time to file chargesheet under Section 167(2) CrPC will also get extended on account of the SC order extending limitation and the lockdown restrictions.

Observing that this was a "clearly erroneous view", the bench said :

"The view of the learned Single Judge that the restrictions, which have been imposed during period of lockdown by the Government of India should not give right to an accused to pray for grant of default bail even though charge sheet has not been filed within the time prescribed under Section 167(2) of the Code of Criminal Procedure, is clearly erroneous and not in accordance with law."

"We, thus, are of the view that neither this Court in its order dated 23.03.2020 can be held to have eclipsed the time prescribed under Section 167(2) of Cr.P.C. nor the restrictions which have been imposed during the lockdown announced by the Government shall operate as any restriction on the rights of an accused as protected by Section 167(2) regarding his indefeasible right to get a default bail on non-submission of charge sheet within the time prescribed. The learned Single Judge committed  serious error in reading such restriction in the order of this Court dated 23.03.2020".

The SC held that the reasoning of the HC that the lockdown was akin to a proclamation of emergency under Article 352 of the Constitution was not right. Even otherwise, the fundamental right to personal liberty under Article 21 cannot be suspended during emergency, the court noted. Therefore, the rights of the accused cannot be taken away.

The Court held that the suo moto order extending limitation cannot be interpreted as extending the limitation period under Section 167(2) CrPC.

"The order dated 23.03.2020 cannot be read to mean that it ever intended to extend the period of filing charge sheet by police as contemplated under Section 167(2) of the Code of Criminal Procedure. The Investigating Officer could have submitted/filed the charge sheet before the (Incharge) Magistrate. Therefore, even during the lockdown and as has been done in so many cases the charge-sheet could have been filed/submitted before the Magistrate (Incharge) and the Investigating Officer was not precluded from filing/submitting the charge-sheet even within the stipulated period before the Magistrate (Incharge)", the Court said.

The Court apprehended that the if the view of the HC single bench was accepted, it could lead to police taking extra liberties even with respect to production of accused after arrest.

"If the interpretation by learned Single Judge in the impugned judgment is taken to its logical end, due to difficulties and due to present pandemic, Police may also not produce an accused within 24 hours before the Magistrate's Court as contemplated by Section 57 of the Code of Criminal Procedure, 1973".

The Court also said that the view taken by the impugned judgment "sends wrong signals to the State and the prosecution emboldening them to act in breach of liberty of a person".

"The order of this Court dated 23.03.2020 never meant to curtail any provision of Code of Criminal Procedure or any other statute which was enacted to protect the Personal Liberty of a person. The right of prosecution to file a charge sheet even after a period of 60 days/ 90 days is not barred. The prosecution can very well file a charge sheet after 60 days/90 days but without filing a charge sheet they cannot detain an accused beyond a said period when the accused prays to the court to set him at liberty due to non-filing of the charge sheet within the period prescribed. The right of prosecution to carry on investigation and submit a charge sheet is not akin to right of liberty of a person enshrined under Article 21 and reflected in other statutes including Section 167, Cr.P.C."

The apex court also observed that the single judge had "breached judicial discipline" with its judgment, as it was contrary to the judgment of another judgment of a single bench, which had held that the right to default bail was not affected by the order extending limitation.

The apex court also observed that the observations made by the single bench against the previous judgment were "uncharitable".

"We may further notice that learned Single Judge in the impugned judgment had not only breached the judicial discipline but has also referred to an observation made by learned Single Judge in Settu versus The State as uncharitable. All Courts including the High Courts and the Supreme Court have to follow a principle of Comity of Courts. A Bench whether coordinate or Larger, has to refrain from making any uncharitable observation on a decision even though delivered by a Bench of a lesser coram. A Bench sitting in a Larger coram may be right in overturning a judgment on a question of law, which jurisdiction a Judge sitting in a coordinate Bench does not have. In any case, a Judge sitting in a coordinate Bench or a Larger Bench has no business to make any adverse comment or uncharitable remark on any other judgment. We strongly disapprove the course adopted by the learned Single Judge in the impugned judgment", the Court said.

It was on March 23 that the SC passed a suo moto order to extend limitation for filing of cases in Courts and Tribunals with effect from March 15 on account of pandemic.

In an order pronounced on May 8 in "Settu vs The State", Justice G R Swaminathan had interpreted the SC's order as applicable only to limitation period for filing cases under the Limitation Act, 1963.

He had observed that the order did not touch upon any specific extension of time for completing investigation under Section 167(2). Hence, it was held that once the mandatory period of 60/ 90 days as prescribed under the provision expires, the accused is entitled for default bail.

Taking a contrary view however, in S. Kasi v. State through The Inspector of Police, Justice G. Jayachandran observed that to hold that the SC order is not applicable to the time period for filing final report amounts to "mocking" the Apex Court.

He held that the period of limitation for investigation under Sec.167 CrPC would also stand extended, keeping in view the extraordinary situation of the Covid-19.