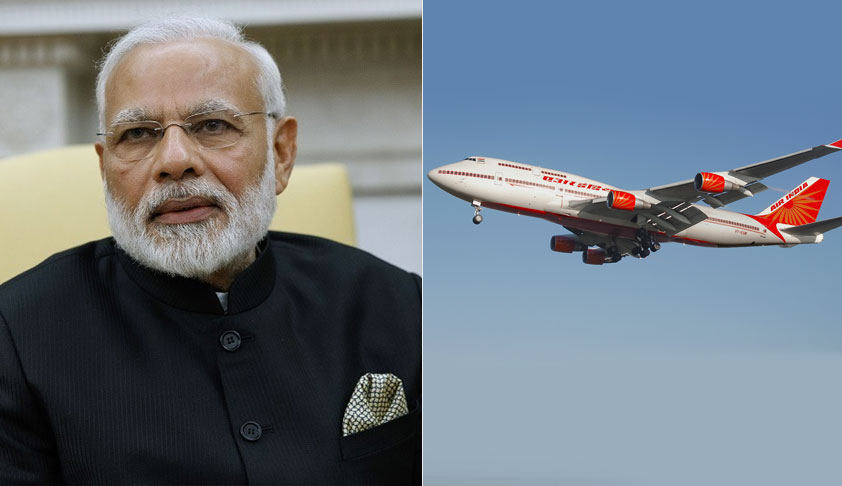 Holding that Air India (AI) cannot withhold the information about Prime Minister’s Air Travel under the cloak of commercial confidence and fiduciary relationship, the Central Information Commission has directed AI to disclose complete record of Narendra Modi’s foreign visits during the financial year 2016-2017 for which AI provided the facility of chartered flights.Information...

Holding that Air India (AI) cannot withhold the information about Prime Minister’s Air Travel under the cloak of commercial confidence and fiduciary relationship, the Central Information Commission has directed AI to disclose complete record of Narendra Modi’s foreign visits during the financial year 2016-2017 for which AI provided the facility of chartered flights.

Information Commissioner Amitava Bhattacharyya directed Air India to give to RTI applicant Commodore Lokesh Batra (Retd) complete details of these foreign trips, including dates, duration and places of visits (abroad) and amount of bills raised date-wise by Air India, the amounts received against each such bill raised with date(s) of receipt of amounts raised in the stated bills.

The CIC passed the direction while rejecting the argument of Air India that the information sought is held by it in commercial confidence and fiduciary capacity even as the Prime Minister’s office and Air India are the arms of the same government.

Batra had moved the CIC when the CPIO Air India denied him the information as sought in year 2016. His first appeal also returned no information.

Batra, in his second appeal, submitted that the information sought by him is related to expenditure incurred from public exchequer and is of interest to taxpayers.

He also submitted that the information requested is of “huge public interest” in view of the fact that fuel tariff bailout amounts, reported to be in thousands of crores are granted to Air India by the government out of public funds created with tax collected from the general public. Also, there is an urgent need for reforms in the working of Air India by understanding the cause(s) of such long delays in the payment of its dues for its various chartered flights.

He also submitted that the PM India website pages downloaded on September 13, 2016, reflect on the Air India’s inability to collect its due payments from the government for years resulting in an adverse impact on the tax-paying public.

While hearing the second appeal, the CIC rejected the reply of the first appellate authority that Air India is a commercial organization and the Government of India officers/dignitaries are its esteemed customers whose travel details cannot be shares being a matter of commercial confidence which is maintained by Air India in its fiduciary capacity.

“The Commission is not convinced with the CPIO’s submission of exemption under the cloak of commercial confidence and fiduciary relationship with the client concerned which in this case is another wing of the same government.

The commission, after close scrutiny of the information sought by Batra, observed that dates, duration and places of the PM’s foreign visits are disclosable as these details are widely reported in the media, both national & international, & both print & electronic.

“Moreover, by no stretch of imagination, it can be acceptable that the information regarding dates, duration and places of the visit by the Hon’ble PM in his official capacity are exempted u/s 8 or 9 of the RTI Act (the exemption clauses under the RTI Act). In so far as amounts of bills raised with date(s) of each individual bill as well as the dates of receipt of amounts with dates against the individual bill so raised are concerned, these should be disclosed as the same involved expenditure out of public exchequer,” it observed.

“Be that as it may, since no desired information was provided to the appellant in the present case, the respondent CPIO, Shri R.K. Goel, General Manager, Air India is directed to provide information complete in all respects to the appellant as available on record in the form of certified true copies of the documents sought free of charge u/s 7(6) of the RTI Act within 15 days of the receipt of the order,” it ordered.

It is to be noted that it was after Batra’s sustained efforts under the RTI Act that the PMO website uploaded some details of the bills of PM’s foreign visits on Air India’s chartered flight.

It was in his quest for more information on the issue that it became known that the PMO had advised Air India way back in 2016 not to share information about Modi’s foreign trips – dates on which bills were raised and sent to the Centre – with him.