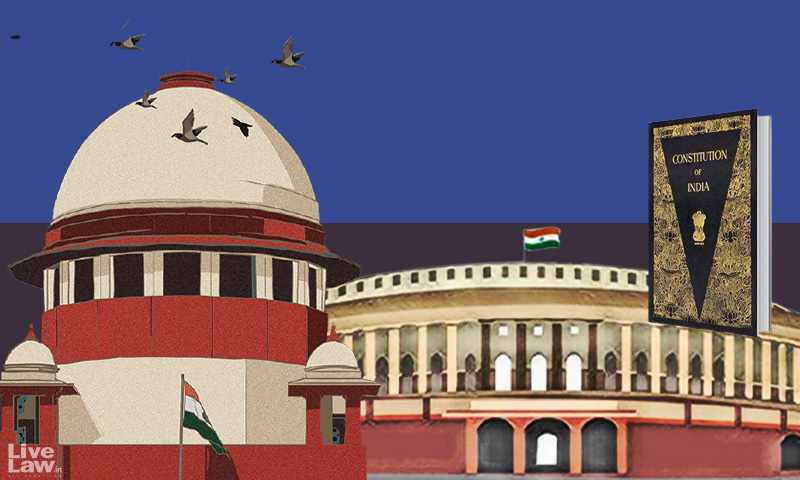 Does 105th Constitutional Amendment fully nullify the effect of Supreme Court's interpretation of 102nd Amendment which had taken away the power of State legislatures to identify Socially and Economically Backward Classes? A reading of the recent Madras High Court judgment which quashed the Tamil Nadu law providing internal reservation of 10.5 % to the Vanniyar Community under the category...

Does 105th Constitutional Amendment fully nullify the effect of Supreme Court's interpretation of 102nd Amendment which had taken away the power of State legislatures to identify Socially and Economically Backward Classes? A reading of the recent Madras High Court judgment which quashed the Tamil Nadu law providing internal reservation of 10.5 % to the Vanniyar Community under the category Most Backward Classes, answers this question in the negative.

The Supreme Court in Dr.Jaishri Laxmanrao Patil v. Chief Minister held by 3:2 majority that the 102nd Constitution Amendment has abrogated the power of states to identify "Socially and Educationally Backward Classes(SEBCs)"

One of the contentions raised by the petitioners challenging internal reservation to Vanniyar community was based on combined reading of 102nd amendment and the SC judgment in Maratha Quota case. They contended that, after the insertion of the 102nd Amendment to the Constitution of India, the State Government has no power to identify/classify any community as Backward and it is the sole domain of the Parliament and hence, the impugned Act is in violation of the Articles 338-B and 342-A of the Constitution of India.

The court quashed the Act on other grounds as well. But it has been specifically held that the Act is invalid for the reason that it was enacted after 102nd Amendment and before 105th Amendment.

Does this mean that any such Act passed by State Legislatures after 11.08.2018 and before 14.08.2021 will have to be struck down for this sole reason? Recently, citing this reasons, the Kerala High Court stayed the operation of a Government Order dated 6th February 2021 including the Christian Nadar community under the SEBC communities in the State.

Whether 105th Amendment Has Retrospective Effect?

It is therefore important to notice the Statement of Object and Reasons in the bill which later became 105th Constitutional Amendment, It reads as follows:

It then says that, although since 1993, there always existed separate lists of the Central Government and that of the State Governments and Union territories, a question has arisen after enactment of the Constitution (One Hundred and Second Amendment) Act, 2018 as to whether the said amendments to the Constitution mandated for a single Central List of SEBCs specifying the SEBCs for each State, thereby taking away the powers of the State to prepare and maintain a separate State List of SEBCs? It can be deciphered that by 'question', indirect reference to Supreme Court judgment have been made.

Thus, it further states: "In order to adequately clarify that the State Government and Union territories are empowered to prepare and maintain their own State List/ Union territory List of SEBCs and with a view to maintain the federal structure of this country, there is a need to amend article 342A and make consequential amendments in articles 338B and 366 of the Constitution".

Can a Constitutional Amendment have retrospective effect?

The question whether a constitutional amendment which seeks to nullify or clarify the effect of a judgment can have retrospective effect be answered by citing the example of the First Constitutional Amendment itself.

The First Amendment Bill, in its Statement of Object and Reasons stated thus: The citizen's right to freedom of speech and expression guaranteed by article 19(1)(a) has been held by some courts to be so comprehensive as not to render a person culpable even if he advocates murder and other crimes of violence. (indirect reference is to some High Court judgments that followed Romesh Thappar judgment of the Supreme Court). Similar statement is made regarding some judicial interpretations of Article 31. Similarly, Article 15 was also amendment and Arts. 31-A and 31-B were inserted with retrospective effect.

Regarding Article 19 amendment, the Amendment Act had carefully placed this provision: "No law in force in the territory of India immediately before the commencement of the Constitution which is consistent with the provisions of article 19 of the Constitution as amended by sub-section (1) of this section shall be deemed to be void, or over to have become void, on the ground only that, being a law which takes away or abridges the right conferred by sub-clause (a) of clause (1) of the said article, its operation was not saved by clause (2) of that article as originally enacted."

This clause came up for interpretation in Kedar Nath Singh vs State Of Bihar AIR 1962 SC 955, in which the court observed:" As a result of their differences in the interpretation of Art.19(2) of the Constitution, the Parliament amended cl.(2) of Art. 19, in the form in which it stands at present, by the Constitution (First Amendment) Act, 1951, by s. 3 of the Act, which substituted the original cl. (2) by the new cl. (2). This amendment was made with retrospective effect, thus indicating that it accepted the statement of the law as contained in the dissenting judgment of Fazl Ali, J., in so far as he had pointed out that the concept of "security of the state" was very much allied to the concept of "public order" and that restrictions on freedom of speech and expression could validly be imposed in the interest of public order."

The Constitution (85th Amendment) Act, 2001, was brought after noticing the judgment of the Supreme Court in the case of Virpal Singh Chauhan AIR 1996 SC 1189. In its statement of object and reasons, it was stated that the judgment adversely affected the interest of the Government servants belonging to the Scheduled Castes and Scheduled Tribes category in the matter of seniority on promotion to the next higher grade. Therefore Article 16(4A) of the Constitution was amended to provide for consequential seniority in the case of promotion by virtue of rule of reservation. Retrospective effect was also given to the amendment with effect from the date of coming into force of article 16(4A) itself, that is, from the 17th day of June, 1995. This amendment was upheld in M. Nagaraj  vs. Union of India [(2006) 8 SCC 212]

105th Amendment Not Expressly Made Retrospective

However, the 105th Constitutional Amendment, does not contain any provisions which disclose the retrospective nature of it, although there is no doubt that it was clarificatory in nature. But the hurdle lies in the notification issued by the Centre, by which it appointed 15th August 2021 as the date on which 105th Amendment provisions shall come into force. Does that mean it has no force before 15th August 2021? This question may arise in future before the Supreme Court in appeals from the above Madras and Kerala High Court cases. In my view, since the 105th Amendment is made to adequately clarify 102nd Amendment, it should be deemed to be operative from the date on which 102nd amendment came into force.