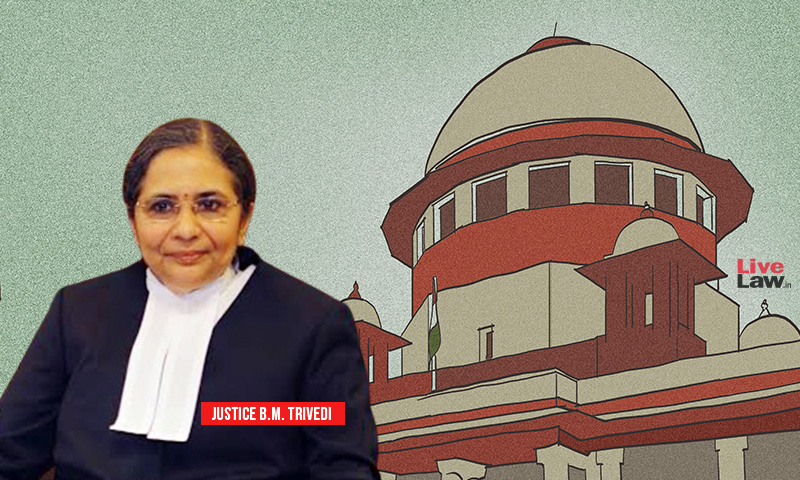 "In the name of democracy, we cross all lines, everything is pardoned," Justice Bela M. Trivedi, who will be taking oath as a Judge of the Supreme Court of India on August 31, had sternly remarked in response to the argument of Advocate General Kamal Trivedi who had attempted to compare the COVID situation in India with that of China and as to how being a communist country, China could...

"In the name of democracy, we cross all lines, everything is pardoned," Justice Bela M. Trivedi, who will be taking oath as a Judge of the Supreme Court of India on August 31, had sternly remarked in response to the argument of Advocate General Kamal Trivedi who had attempted to compare the COVID situation in India with that of China and as to how being a communist country, China could deal with the situation, while India, being a democratic country, could not.

Justice Trivedi, the first woman judge from the Gujarat High Court to be elevated to the Supreme Court, had remarked thus, while hearing Suo Moto COVID PIL, in an attempt to send a strong message to the Government of Gujarat that it couldn't shy away from its responsibilities citing 'democracy' as a prime reason of its difficulty to deal with the COVID situation.

Justice Bela Trivedi will be the only judge in the Supreme Court at present to come from the trial courts.

During the period from 2003 to 2006, she has served as the Law Secretary to the Gujarat Government.

While reminding the Government of its duties, Justice Bela Trivedi, didn't go soft on the Citizens, as the Bench led by her had, during the second COVID surge, refused to reduce fine from 1000 to 500 for not wearing mask in public.

"Let them wear masks…There should be some deterrence of fine. People will remain in discipline. Let 50% of the population get vaccinated. This is the only weapon. You (the government) may succumb to popular demand, the court cannot," she had remarked orally.

Last month, a Division bench led by her had dismissed a petition seeking directions to allow the Parsi Community to perform last rites of their members as per their customary practice i.e. "Dokhmenashini".

Observing that the safety and welfare of the State is the supreme law, the Court had remarked thus said:

"Even the fundamental rights to profess, practice or propagate religion, and the right to manage religious affairs, as enshrined under Articles 25 and 26 of the Constitution of India, are subject to public order, morality and health."

A bench led by Justice Trivedi dismissed a petition moved by two Railway Stations Auto Rikshaw Drivers' Unions seeking financial assistance from the State Government under the Atma Nirbhav Gujarat Scheme after observing that the petitioners cannot claim financial assistance as a matter of right.

Observing that all businesses and professions have badly been hit by the Covid 19 pandemic, a division bench comprising of Justice Bela M. Trivedi and Justice Bhargav D. Karia observed thus:

"It cannot be gainsaid that the rigour of Covid Pandemic had affected the lives and livelihood of people world over and has caused great financial losses to every sector of the society."

"Under the circumstances, the petitioners cannot claim as a matter of right to get financial assistance or monetary benefits for auto rickshaw drivers, more particularly when all the businesses and professions have been badly affected due to the Pandemic."

A bench led by Justice Bela M. Trivedi had recently set aside a Show Cause Notice (SCN) issued by Additional Commissioner of Central Goods and Service Tax, Ahmedabad as it was without Mandatory pre-show cause notice consultation.

The Bench had ordered thus on the ground that the petitioners were not granted an adequate opportunity for the consultation prior to the issuance of the said notice as required under the circulars.

Last year, while hearing the plea of a 32-year-old Hindu man, who wished to convert to Islam, the Bench of Justice Trivedi had directed Bharuch district authorities to expedite the conversion process.

When a habitual offender was found transporting 22 animals for slaughter with their legs and necks tied in a cruel manner, without provision of food or water, Justice Trivedi had taken strong exception to the same and had observed thus:

"Animals, like human beings have the capability of comprehending the physical and mental pain and that they do feel the severity of the physical harm inflicted on them".

Taking a strict view of an incident wherein she had received certain phone calls and SMS from an unknown number, in connection to an anticipatory bail application listed before her, Justice Trivedi had ordered the Superintendent of Police to get the statements of two individuals who was identified in connection to the phone call, during a preliminary inquiry held by the Registrar (IT).

Noting that "nobody can directly or indirectly try to approach the Court or to influence the Court, in a way try to pollute the stream of justice," the court ordered a further inquiry into the matter.

The PIL had made two suggestions: one is to frame rules in this regard and the other is to organise regular training for lawyers on how to conduct matters, and the ethics and etiquettes they need to follow in the courtroom.

In 2019, a bench led by Justice Trivedi rejected an application filed by convicted IPS officer Sanjiv Bhatt seeking suspension of his life sentence in a custodial death case. "..it appears that the applicant has scant respect for the Courts and is in the habit of misusing the process of law and scandalizing the Court," the division bench said while dismissing Bhat's application.

She very often refers to Gandhian principles during hearings and says that  his teachings have helped her grow.

In 2017, a judgment delivered by her had directed the he Gujarat government to put to use parcels of land donated during the bhudhan movement.  She had said that we should be guided by Gandhian principles.

During her farewell ceremony at the Gujarat High Court, she had called herself an accidental judge as she remarked that she pursued LL.B. without any serious thought of practice, but went on to became a lawyer.

"I never wanted to be a judge, that too of a subordinate the court, but I became a judge of the City Civil and Sessions Court," she had added.