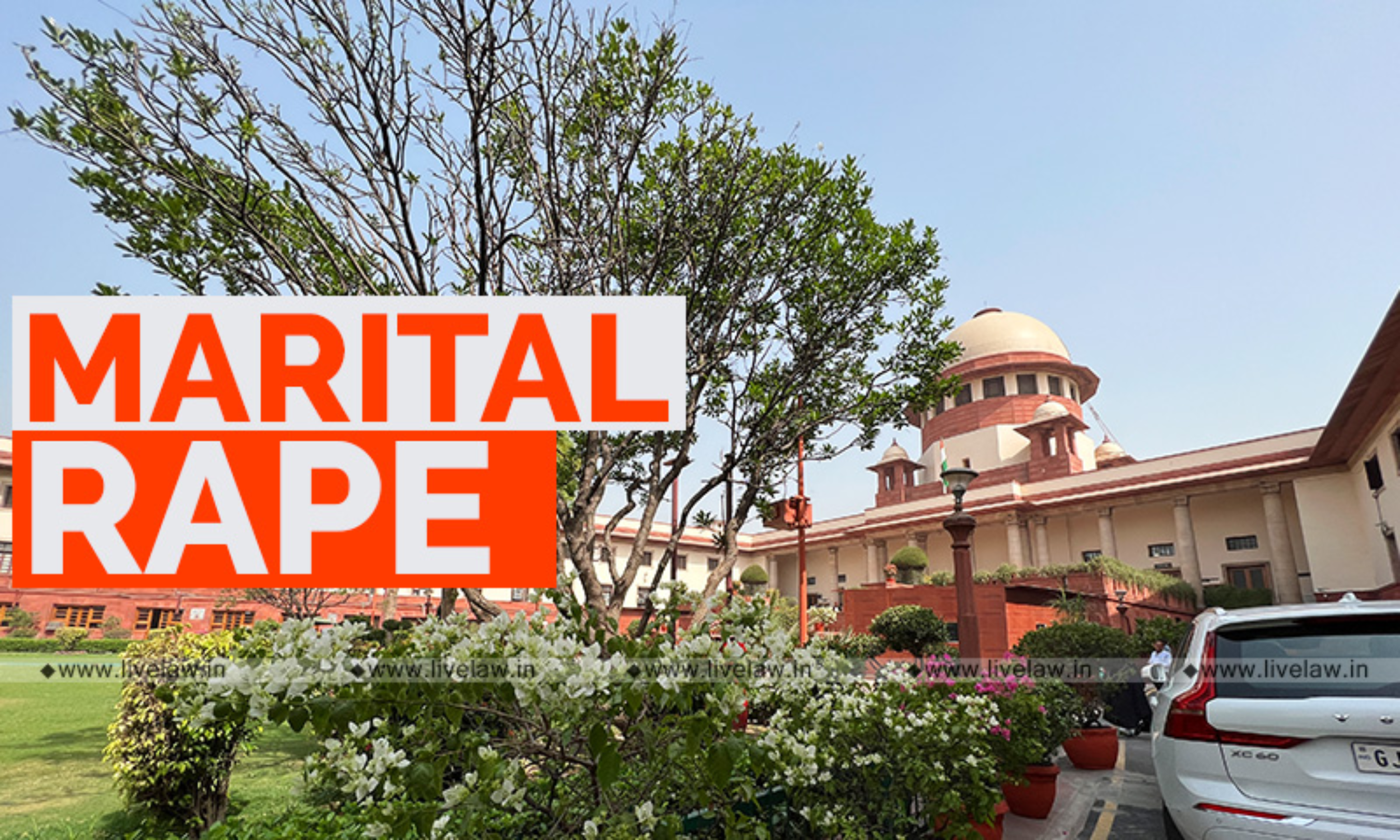 India is one of the few countries in the world that is yet to criminalise martial rape. The issue has been the subject of much debate of late in a country whose courts have increasingly been delineating the right to individual autonomy as a right that is to be cherished and protected. Recently, the Delhi High Court attempted to provide clarity over the said controversy but the...

India is one of the few countries in the world that is yet to criminalise martial rape. The issue has been the subject of much debate of late in a country whose courts have increasingly been delineating the right to individual autonomy as a right that is to be cherished and protected.

Recently, the Delhi High Court attempted to provide clarity over the said controversy but the outcome was a split verdict, where Justice Rajiv Shakdher held that the exemption to the husband from the offence of marital rape is unconstitutional. Exception 2 of 375, 376B IPC was therefore struck down by him as violative of Article 14 of the Indian Constitution. However, Justice C Hari Shankar disagreed with Justice Shakdher and held that Exception 2 to Section 375 does not violate the Constitution and is based on an intelligible differentia.

The controversy over marital rape has now reached the Supreme Court and recently notice was issued by a bench of Justice Ajay Rastogi and Justice B. V. Nagarathna on September 16. Now, the court will examine the batch of petitions challenging the exception to Section 375 of the Indian Penal Code, which exempted forceful sexual intercourse by a man with his wife.

On September 29, a bench led by Justice DY Chandrachud in X vs Principal Secretary, Health and Family Welfare Department, Govt of NCT Of Delhi, significantly held that the meaning of rape must be held to include "marital rape" for the purpose of the Medical Termination of Pregnancy Act and Rules.

"Married women may also form part of the class of survivors of sexual assault or rape. The ordinary meaning of the word 'rape' is sexual intercourse with a person, without their consent or against their will, regardless of whether such forced intercourse occurs in the context of matrimony. A woman may become pregnant as a result of non-consensual sexual intercourse performed upon her by her husband", the Court held.

The Court while indicating the inclusion of marital rape for the purpose of termination of pregnancy, also paved the way ahead for the ongoing marital rape hearing before the Supreme Court itself.

In a progressive move and in an attempt for be more gender inclusive, the judgment at the outset stipulates that usage of the term 'woman' would also include persons other than cis-gender women who may also require access to safe medical termination of pregnancy.

While highlighting that the institution of marriage cannot act as a hurdle for a woman to seek relief against forced sex, the Court also underscored, "It is not inconceivable that married women become pregnant as a result of their husbands having "raped" them. The nature of sexual violence and the contours of consent do not undergo a transformation when one decides to marry. The institution of marriage does not influence the answer to the question of whether a woman has consented to sexual relations."

Significantly, the judgment also took cognisance of the harsh reality of intimate partner violence which can often also take the form of rape. The Court dispelled the myth that rape generally occurs only during an interaction with a stranger and took cognisance of the lived realities of hundreds of women who have been subjected to gender-based violence within the context of family and intimate relationships.

With regard to the issue revolving around the exception of marital rape, the Court ruled that regardless of exception 2 of section 375 of IPC which exempts criminalisation of marital rape, for the purpose of Rule 3B (a) of Medical Termination of Pregnancy Rules 'rape' would include the husband's act of sexual assault or rape committed on his wife.

However, in the same breath, the Court clarified that including marital rape within the meaning of rape was solely to be done for the purpose of the Medical Termination of Pregnancy Act alone and that any other interpretation would have the effect of compelling a woman to give birth to and raise a child with a partner who inflicts mental and physical harm upon her.

In an attempt to make abortion services more accessible and while taking into consideration the reality that rapes are not reported due to continued stigma especially when it occurs in a familial setting, the Court also asserted that women do not need to seek recourse to formal legal proceedings before being able to access abortion services. Highlighting that such an interpretation would be in consonance with the legislative intent behind the Medical Termination of Pregnancy Act, the Court also pointed out that in such cases the legal presumption as to the mental trauma suffered by the survivor comes into play.

The Exception, like many penal laws in India, continues to exist on our statute books as a colonial hangover. It stems from outdated notions of the relationship between a man and his wife, first crystallised by British jurist Sir Matthew Hale. In an unsupported, extra-judicial statement made in 1736, he said "but the husband cannot be guilty of a rape committed by himself upon his lawful wife, for by their mutual matrimonial consent and contract the wife hath given up herself in this kind unto her husband, which she cannot retract."

This statement, which came to be known as Hale's Principle, formed the basis for the marital rape exception and was followed in England for many years. Under this principle, a husband could not be held guilty of raping his wife, as the wife gives up her body to her husband at the time of marriage. During the British rule in India, this principle, like others, found its way into statute books that govern us to date. It was assimilated in the Indian Penal Code, drafted by Thomas Babington Macaulay in 1860.

"Exception. -Sexual intercourse by a man with his own wife, the wife not being under fifteen years of age, is not rape," reads the original text from 1860 Penal Code.

In the split verdict, Justice Shakdher gave a very well-reasoned verdict as to how marital rape violates the basic rights of a married woman. He said that for a woman who is violated by her husband by being subjected to the vilest form of sexual abuse (i.e., rape), it is no answer to say that the law provides her with other remedies.

"When marriage is a tyranny, the state cannot have a plausible legitimate interest in saving it." Reads the judgment

With regard to consent – he significantly said that women's right to withdraw consent at any given point in time forms the core of the woman's right to life and liberty, which encompasses her right to protect her physical and mental being.

Lastly, he also held that "non-consensual sex destroys this core by violating what is dear to her, which is, her dignity, bodily integrity, autonomy and agency and the choice to procreate or even not to procreate. While marital rape leaves physical scars, it inflicts much deeper scars on the psyche of the victim which remain with her years after the offence has occurred."

Rape is one of the most inhumane acts within a society irrespective of any gender. As Justice Dr. Arijit Pasayat in State of MP v. Munna Choubey said that "rape is violation with violence of the private person of a woman – an outrage by all means. By the very nature of the offence, it is an obnoxious act of the highest order. The physical scar may heal up but the mental scar will always remain. When a woman is ravished what is inflicted is not merely physical injury but a deep sense of some deathless shame."

It may be noted that the Supreme Court is at present considering petitions challenging the constitutionality of Exception to Section 375 of the Indian Penal Code. The Court ruled that exclusion of unmarried women who conceive out of live-in relationship from the Medical Termination of Pregnancy Rules is unconstitutional.
After the observations made by the Supreme Court in X vs. Principal Secretary, Health and Family Welfare Department, Govt of NCT of Delhi (Supra), there is an easier way ahead as the court has observed that in cases of pregnancy and termination, the term "marital" rape has to be included.

In a win for personal liberty and bodily autonomy, the Supreme Court in the aforementioned judgment has also emphasised that since the foetus relies on the woman's body to sustain therefore the decision to terminate is firmly rooted in their right of bodily autonomy.

While batting for taking into account changing societal norms and realities while interpreting the law, the Court in this landmark judgment has also asserted that the law in modern times is shedding the notion that marriage is a precondition to the rights of individuals. This observation could very well refute the argument that the State has a compelling state interest in preserving the institution of marriage even when it violates bodily autonomy.

While parting ways, it would be pertinent to recall what Justice DY Chandrachud observed in KS Puttaswamy v. Union of India, "Dignity cannot exist without privacy. Both reside within the inalienable values of life, liberty and freedom which the Constitution has recognized."

(Areeb Uddin Ahmed is an Advocate based in Delhi, he writes on various legal issues. He tweets at @Areebuddin14. Aaratrika Bhaumik is a legal journalist at LiveLaw. She tweets at @Aaratrika_11).