On The Right To Protest In Sub-Judice Matters 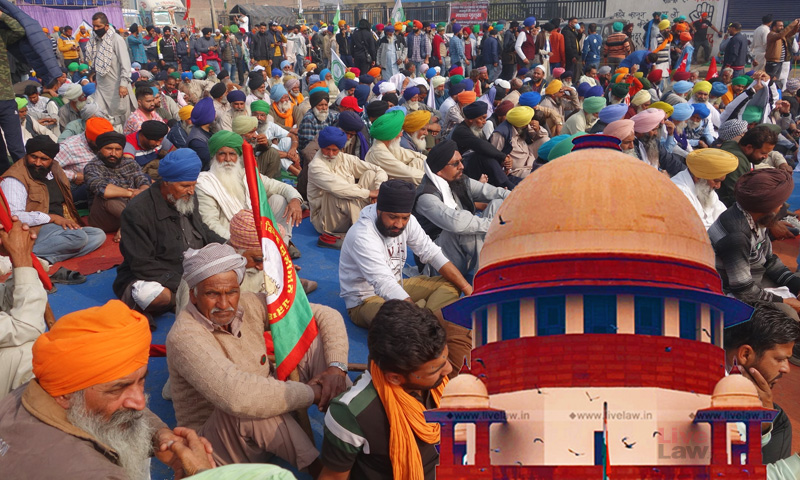 x
Does holding a protest in any way impede with the Judiciary's function to adjudicate on the constitutional validity of a legislation and is imposing restrictions on the right to protest the 'least intrusive' way of achieving this purpose?

On Monday, while hearing a Writ Petition filed by Kisan Mahapanchayat seeking permission to stage Satyagraha at Jantar Mantar, a Supreme Court Bench of Justices Khanwilkar and C T Ravikumar ordered that the Court will examine the issue whether protests can be allowed when a matter is sub-judice. The Court is to examine the issue of whether the Right to Protest is an absolute right...

On Monday, while hearing a Writ Petition filed by Kisan Mahapanchayat seeking permission to stage Satyagraha at Jantar Mantar, a Supreme Court Bench of Justices Khanwilkar and C T Ravikumar ordered that the Court will examine the issue whether protests can be allowed when a matter is sub-judice.

The Court is to examine the issue of whether the Right to Protest is an absolute right and whether a Writ Petitioner already having invoked the legal remedy by filing Writ Petition against the farm laws should be permitted to resort to protests in the same matter which is sub-judice. In other words, the court seeks to examine whether the Right to Protest and the right to challenge the validity of a legislation are mutually exclusive in nature. The specific issue raises important questions of the scope of the constitutionally protected Right to Protest and the contours and limitations thereof.

Right To Protest Under The Indian Constitution

The Constitution of India guarantees the right to peaceful protest under Art.19. Though the term 'protest' does not find explicit mention anywhere in the Constitution, it has been read into Art.19 (1) (a) Freedom of Speech and Expression, Art.19 (1) (b) Right to Assemble Peacefully and Art.19 (1) (c) Right to form Associations and Unions. Read together, these clauses protect the 'Right to Protest'. However, as has been clarified in numerous judgements of the Supreme Court and High Courts, the protection extends to peaceful protests only. In the landmark case of Himmatlal K Shah vs Commissioner of Police[1], the Supreme Court ruled that the government "cannot by law abridge or take away the right of assembly by prohibiting assembly on every public street or public place."[2] In Ramlila Maidan Incident vs Home Secretary, Union of India & Others[3], the Court held that the citizens have a fundamental right to assembly and peaceful protest which cannot be removed by arbitrary executive or legislative action.

However, like other Fundamental Rights, the right to protest is not absolute in nature. It is subject to certain "reasonable restrictions". Art.19 (2) and (3) of the Constitution authorises the government to impose restrictions on the grounds of interest of sovereignty and integrity of India, the security of the State, friendly relations with foreign countries, public order, decency or morality or in relation to contempt of court, defamation or incitement to an offence.

Recently, in the case of Amit Sahni vs Commissioner of Police[4] ('Shaheen Bagh Case'), the Court had held that the right to protest in public places in not absolute in nature and that public places cannot be occupied indefinitely. The Court further said that "while democracy and dissent go hand in hand, the demonstrations expressing dissent have to be in designated place alone."[5]

Thus, Courts have, by way of numerous judgements, delineated the scope and extent of the right to protest under the Constitution. Curiously, nowhere has the term 'sub-judice' has been spelt out as a reasonable restriction to the fundamental right to protest.

Right To Protest In Sub-Judice Matters

The issue of the right to protest in a matter being heard by a constitutional court did come to the attention of the Supreme Court of India while hearing the matter of Shaheen Bagh protests. Therein, the Court, by way of its order dated 17.02.2020, had held that :

"We have put to her that law has been enacted by the Parliament and the law is facing constitutional challenge before this Court but that by itself will not take away the right to protest of the persons who feel aggrieved by the legislation. However, the question is where and how protest can carry on without public ways being blocked."

Notably, the constitutionality of the law in question against which protests were being held- Citizenship Amendment Act, 2019, had been challenged by way of numerous petitions before the Supreme Court of India. This fact did not become a ground for the Court to decide the validity of the Shaheen Bagh protests. In fact, it explicitly noted that the constitutional challenge to the law did not take away the right of the persons to protests against the law. The Court reiterated its crucial observations in the final judgement given in Amit Sahni vs Commissioner of Police & Ors. It held that a matter being sub-judice does not by itself take away the right to protest of the persons who feel aggrieved by the legislation. It noted:

"We had noted in our order dated 17.02.2020 that despite the law facing a constitutional challenge before this Court, that by itself will not take away the right to protest of the persons who feel aggrieved by the legislation. We, however, simultaneously noted that the question was where and how the protest can be carried on, without public ways being affected." (Para 4)

Thus, even while hearing the matter of Shaheen Bagh protests, the fact that pleas had been filed in the Supreme Court challenging the validity of the Citizenship Amendment Act, 2019 did not prejudice the right of protestors to hold protests against the law.

Crucially, a Bench headed by the then CJI S A Bobde, while hearing a PIL seeking removal of farmers protests, had observed that theCourt would not interfere with the protest in question. It had held:

"We clarify that this Court will not interfere with the protest in question. Indeed the right to protest is part of a fundamental right and can as a matter of fact, be exercised subject to public order. There can certainly be no impediment in the exercise of such rights as long as it is non-violent and does not result in damage to the life and properties of other citizens and is in accordance with law. We are of the view at this stage that the farmers' protest should be allowed to continue without impediment and without any breach of peace either by the protesters or the police".

It is relevant to note that the Supreme Court had made these observations endorsing the farmers protests when the petitions challenging the farm laws were pending before it.

Even in its order dated 12/01/2021, where it stayed the implementation of farm laws, the Court had observed that it was not stifling protest.

Sub-Judice Matters As A Restriction

If 'sub-judice matters' have to operate as a restriction on the exercise of the fundamental right to peaceful protest, it must satisfy certain conditions.

Third, even if 'sub-judice matters' are read into the 'restrictions' given under Art.19 (2) and (3), they must be held to be 'reasonable' in nature. Since the restrictions on Art.19 need to be 'reasonable' in nature, they need to be tested on the anvil of proportionality. The four-pronged test of proportionality laid down in Modern Dental College vs State of Madhya Pradesh[8] held that:

"… a limitation of a constitutional right will be constitutionally permissible if: (i) it is designated for a proper purpose; (ii) the measures undertaken to effectuate such a limitation are rationally connected to the fulfilment of that purpose; (iii) the measures undertaken are necessary in that there are no alternative measures that may similarly achieve that same purpose with a lesser degree of limitation; and finally (iv) there needs to be a proper relation ('proportionality stricto sensu' or 'balancing') between the importance of achieving the proper purpose and the social importance of preventing the limitation on the constitutional right." [9](Para 53)

The test of proportionality was further upheld in the landmark decision K.S.Puttuswamy vs Union of India[10], as a standard of review for any limitation on the exercise of a fundamental right. One of the conditions to be satisfied under the Proportionality Test is the "purpose" that is sought to be served by way of the restriction in question. To argue that "sub-judice matters" act as a reasonable limitation on the exercise of fundamental right to protest, it must be proven that there is a valuable purpose sought to be achieved, that there is a rational nexus between the limitation and the purpose, and that the restriction is the least intrusive way of doing so.

While it may be argued that such a restriction would help achieve the purpose of 'adjudicating on the constitutionality of a law', it must still be satisfied whether there is a rational nexus between ceasing protests and adjudicating matters in constitutional courts. Does holding a protest in any way impede with the Judiciary's function to adjudicate on the constitutional validity of a legislation and is imposing restrictions on the right to protest the 'least intrusive' way of achieving this purpose?

These are important issues that the Court must grapple with if at all it adopts the view that the right to protest is not absolute in nature and protests cannot be held on "sub-judice matters".

Interestingly, at the beginning of its judgement in Shaheen Bagh Case, which dealt with the scope of the constitutional right to protest, the Court talked about the concept of separation of powers and declared that "one of the bedrocks of the Constitution of India is the separation of powers between the Legislature, the Executive and the Judiciary." Further, it went on to say- "it is the function of the Legislature to legislate, of the Executive to implement the legislation and of the Judiciary to test the constitutional validity of the legislation if a challenge is so laid." (Emphasis added)

If it is the duty of the Judiciary to test the constitutional validity of the law then how can a "sub-judice matter" prejudice the right of a person to protest against the actions of the other two organs of the government- Executive or Legislature- which, by the Court's own submission, are institutions separate from the Judiciary? If the Court takes cognisance of a matter, does that mean it must act as a cease-and-desist notice against all other forms of protest and dissent against other organs of the State? A protest might be organised to air grievance on a number of issues, other than the constitutionality of the law in question. Merely because the constitutionality of a law is in question before a constitutional court, does that imply citizens lose their right to protest on related matters?

In any case, no matter what reasoning the Bench ultimately adopts, Kisan Mahapanchayat Vs. Union of India, will put into sharp focus questions on the contours of the Right to Protest, the limitations thereof and rules of constitutional interpretation.