Pride and Prejudice of Certificate Under Section 65B(4), Indian Evidence Act 1872 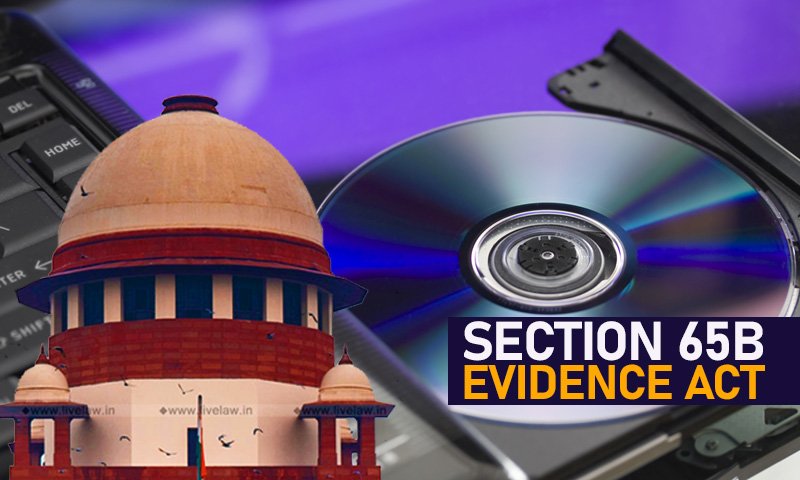 Exactly twenty years ago on 17.10.2000, amendments were introduced to the Indian Evidence Act, 1872 ('the Act') by way of Section 65A and 65B prescribing the procedure to prove electronic records as secondary evidence. These provisions laid down an unambiguous yet obscure approach as to how an electronic record will be admissible in a court of law. In no time, the task of proving...

Rivalry of Compliance of the Section 65B with Secondary Evidence

The Apex Court in Navjot Sandhu (supra) held that secondary evidence, which is in electronic form, if not supported with the Sections 65B would be admissible and such evidence could be proved under Section 63 and 65 of the Act. For nine years the courts in our country meticulously followed the black and white letters of the statute wherein the courts allowed the admission of evidence under Section 63 and 65 whilst holding that there is no bar to adducing secondary evidence under such provisions of the Act.

Section 65B: Complete code and a Special provision

Things panned out differently after nine years when a three-Judge Bench of the Supreme Court in Anvar P.V. v. P.K. Basheer held that the Section 65B is a special provision which deals with the admissibility of the electronic evidence whereas Secondary Evidence under Section 63 and 65 is general law. The Court while applying the principle of Generalia specialibus non derogant held that the Section 65B being a special law will prevail over the general law. Therefore, the Court while overruling the decision in Navjot Sandhu held that electronic evidence, being secondary evidence, would only be admissible if the mandate of Section 65B is met. Moreover, the court also clarified that if an electronic evidence is produced as a primary evidence then in such a case the compliance of Section 65B is not necessary.

Dawn of Acquittals: A blessing for a Defence Lawyer

Post-2014 i.e. after the pronouncement of the decision in Anvar P.V. (supra), it seemed that the defence/accused often used this decision to broach the absence of the certificate along with electronic evidence produced by the Prosecution. A mere plea of the defence questioning the certificate under Section 65B would easily make electronic evidence inadmissible and could shatter the case of the Prosecution. For instance, the Hon'ble Delhi High Court in State v. Jaideep, 2018 SCC OnLine Del 13290 while dealing with admissibility of the intercepted recorded voice and Call Detail Records of the accused, which was rejected by the Trial Court for want of Certificate under Section 65-B of the Act, acquitted the accused by holding that the prosecution failed to produce any certificate under Section 65-B of the Act. The court further held that to prove the electronic evidence in the absence of a certificate under Section 65-B the CD & CDRs, relied upon by the prosecution became inadmissible. Pertinently, even the Punjab High Court in Avtar Singh v. Central Bureau of Investigation, CRA-S Nos.1508 of 2011 and recently Rajasthan High court in Narendra Kumar v. State of Rajasthan, 2020 SCC OnLine Raj 1414 acquitted the accused, one of the reasons being that the prosecution had failed to lead the secondary evidence in terms of Section 65B of the Act which thereby had created yawning gaps in the case of the prosecution.

The Supreme Court in Sonu v. State of Haryana, (2017) 8 SCC 570 held that electronic evidence marked without the certificate is a curable defect and could be rectified. The court also held that this being a method or mode of proof where the objection if not taken at the stage of the trial, then such objection cannot be taken at the appellate stage. This decision being centred on the approach of, 'What's done is done, What's gone is gone' was only for the sole reason that if such an objection is allowed by the court at the appellate stage then the Prosecution would never get an opportunity to cure the defects. The Court further stated that the objections pertaining to the issue of per se admissibility of the document could also be raised at the appellate stage as it concerned one of the fundamental issues of trial.

Shafi Maohmamed: Section 65B Not a complete code

Within no less time a two-Judge Bench of the Apex Court in Shafhi Mohammad v. State of Himachal Pradesh, thereafter held that the Section 65A and 65B are not the complete code and clarified that compliance of Section 65B is not always mandatory which is in direct contravention with the decision of Anvar P.V. (supra) The court held that in case a person who does not possess electronic evidence from which the secondary evidence is produced, then in such a case the person cannot be asked to produce a Section 65B Certificate. The Court relied on the decisions of the Three-Judge Bench in Tomaso Bruno v. State of U.P., (2015) 7 SCC 178 and Ram Singh v. Ram Singh, 1985 Supp SCC 611 wherein it was held that if electronic evidence is authentic and relevant the same can be admitted subject to the satisfaction of the court about its authenticity and whether a person is in a position to produce the Certificate under Section 65B(4) or not.

Interest of Justice: The Harmonizing Duty of Courts

The saga of Shafhi Mohammad (Supra) not only ended there by holding that compliance of Section 65B is not always mandatory but also continued further by holding that requirement of producing the certificate under Section 65B of the Act is a procedural aspect and the requirement of its production can be relaxed whenever required and justified, in the interest of justice. Since this decision provided an escape to the mandate of Section 65B the subordinate courts witnessed several cases where the "inadmissible evidence" was being made "admissible" under such relaxation. One such case is of the Hon'ble Delhi High Court in Gulshan v. State, 2019 SCC OnLine Del 6552 wherein it was held that scientific evidence produced by Prosecution without Section 65B certificate is admissible. This is where the problem began, as the subordinate courts now had to contemplate between the decision of Anvar P.V (supra) and Shafhi Mohammad (Supra) wherein on one hand they had to follow the strict mandate of law whereas on the other hand, they had to balance equities.

Litigation is not a game of Chess

Often the courts in India and the Courts across the world have observed that litigation cannot be a game of chess where at every stage the players could divulge new tricks for the purpose of traps. Consequently, one such case also pertains to the Section 65B wherein the Bombay High Court in Kumarpal N. Shah v. Universal Mechanical Works Pvt. Ltd., 2019 SCC OnLine Bom 1627 while dealing with the issue of production of documents obtained under RTI w.r.t. requirement of a certificate under Section 65(B) reiterated its observations made in Gulshan Sadruddin Vishram v. Gulshan Allauddin Vishram, Writ Petition No. 2209 of 2015 that procedure is only the handmaid of the justice and not its mistress. "The approach cannot be that because some documents may prove to be inconvenient, every attempt should be made to resist its production. Litigation is not a game of Chess. Rather, litigation is an attempt to discover where the truth lies."

It was only after two decades when a three-Judge bench of the Apex Court missed an opportunity to provide a much-needed clarity with the conundrum which arose because of successive decisions. The Court while answering to the reference in Arjun Panditrao (supra) held that the certificate required under Section 65B(4) is a condition precedent to the admissibility of evidence by way of an electronic record. The Court declared the decision in Tomaso Bruno (supra), as per incuriam. The Court while overruling Shafhi Mohammad (Supra) dwelled out the statutory provisions to overcome the hardship where electronic evidence which is not in possession could now be produced, by securing an order from the Judge under Section 165 of the Act, Section 91 CrPC and under Order XVI of the Civil Procedure Code, 1908. Moreover, if a person refuses to issue the Certificate then an application can be made under Section 65B(4) in order to adduce such electronic evidence.

The Apex Court clarified that till the hearing in a trial is not over, the requisite certificate can be directed to be produced by the learned Judge at any stage, so that information contained in electronic record form can then be admitted, and relied upon in evidence. The Hon'ble Supreme Court also revisited its decision in Central Bureau of Investigation v. R.S. Pai, (2002) 5 SCC 82 wherein it was held that even if the Prosecution has mistakenly not produced any document, the same could be produced before the Court at a later stage. However, the Court laid down a caveat that such exercise, under Sections 91 or 311 of the CrPC or Section 165 of the Act, should not result in serious or irreversible prejudice to the accused.

Why Pride and Prejudice?

Law and Literature share an inexplicable relationship. Though Austen's work, Pride and Prejudice (initially titled as First Impression), was centred on the plot of societal acceptance of love with that of reputation and appearance, which is divorced from the present theme, however, there is a resemblance to point of comparison of traits of the protagonists of Pride and Prejudice with the protagonist of a trial i.e. Accused and Prosecution. Upon a bare perusal of the two-decade-long history the First Impression that we make of the Section 65B Certificate, is by comparing the Accused with the Pride as the accused during the course of two decades has been benefiting with the conundrum of law on the subject. We refer Prejudice with the Prosecution as it has been observed that the strict mandate of the production/attestation of the Section 65B Certificate could often shut the evidence out of the court irrespective of the fact as to how valuable such evidence is to ascertain the truth. Thus, the prosecution is prejudiced against the pride of the accused.

It cannot be overlooked that the legislature by introducing Section 65B in the Act never intended to impose a preconditional mandate for the requirement of the certificate as to adduce electronic evidence. It was only that decision of Anvar P.V. (supra) traveled beyond the statute and laid down the strict mandate. Though the Apex Court in Arjun Panditrao (supra) has resolved the conflict which pertains to Shafhi Mohammad (Supra) by overruling it and taking away the relaxation of admitting the electronic evidence in the interest of justice provided therein by substituting it with the powers of a judge under statute(s) to obtain the certificate. No doubt that this approach could even further delay the trial. However, the Apex Court turned a blind eye towards the conflict between the Sonu (supra) and Anvar P.V. (supra). The court failed to elucidate that Sonu (supra) categorically held that Section 65B is only a 'mode of proof' which will not affect the per se admissibility of the electronic evidence. Thus, the decision of Sonu is in direct contradiction with the decision of Anvar P.V. (supra) and Arjun Panditrao (supra).

It would now be perplexing for the courts to tackle such a quarrelsome situation because now all would depend upon the discretion of the Judge as it would be the duty of the court to balance the rights of both sides.

Harish Malik is Partner and Pareesh Virmani is a Paralegal at Kred-Jure, Advocates and Consultants, New Delhi.