'Sanctity Of The Constitution Lies Essentially In Its Affirmation Of Secularity': Begum Aizaz Rasul, The Sole Muslim Woman In Constituent Assembly 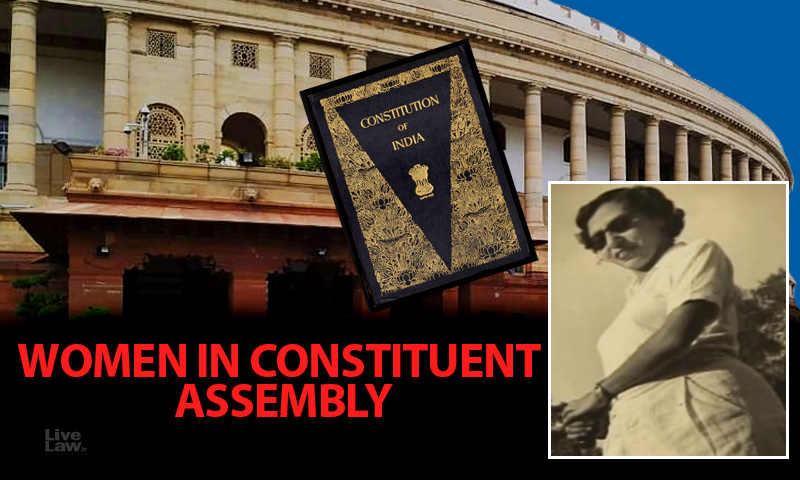 "The most outstanding feature of the Constitution is the fact that India is to be a purely secular State. The sanctity of the Constitution lies essentially in its affirmation of secularity and we are proud of it. I have full faith that this secularity will always be kept guarded and unsullied, as upon it depends that complete unity of the peoples of India without which all hopes of progress would be in vain."

Amidst the bloodied violence of partition on religious lines, Begum Aizaz Rasul's voice as a Muslim woman having roots in Punjab, was an important (and perhaps even a unique) voice of the Indian Constituent Assembly.

In this piece, I bring out excerpts from her speeches on minority rights and women's rights in new republic.

Begum Aizaz Rasul was daughter of Sir Zulfiqar Ali Khan, of the Royal Family of Malerkota and married to Nawab Syed Aizaz Rasul, Taluqdar of Awadh.[2] Before joining the Constituent Assembly, she was previously member of Uttar Pradesh Legislative Council. She joined the Constituent Assembly on 14th July 1947 from the United Province.[3] Later, she also served as member of the Rajya Sabha between 1952 and 1956.[4] She was one of the three women members of the Advisory Committee on Fundamental Rights.

Thus, while speaking on consideration of report of Advisory Committee on minorities, she remarked-

"we do not want any special privileges accorded to us as Muslims but we also do not want that any discrimination should be made against us as such. That is why I say that as nationals of this great country we share the aspirations and the hopes of the people living here hoping at the same time that we be treated in a manner consistent with honour and justice."[10]

Similarly, on fears that without reservation Muslims will not return to the legislature and might be politically ignored, she remarked-

"I do not visualise any political party in the future putting up candidates for election ignoring the Muslims. The Muslims comprise a large part of the population in this country. I do not think any political party can ever ignore them, much less the Indian National Congress which has stood for the protection of minorities."[11]

"I do not understand why loyalty and religion go together. I think that those persons who work against the interests of the State and take part in subversive activities are disloyal, be they Hindus or Muslims or members of any other community. So far as that matter is concerned, I feel that I am a greater loyalist than many Hindus because many of them are indulging in subversive activities, but I have the interest of my country foremost at heart." [12]

Rasul believed that Indian Constitution would not only not discriminate against women but in fact it will also ensure 'equality of opportunity' for women in the new republic.[13] Much like other woman members she also had argued that Indian heritage historically recognized equality of women. (an idea much contested in History). On adoption of Constitution, she remarked-

"the women of India are happy to step into their rightful heritage of complete equality with men in all spheres of life and activity. I say so because I am convinced that this is no new concept which has been postulated for the purposes of this Constitution, but is an ideal that has long been cherished by India, though social conditions for some time had tragically debased it in practice. This Constitution affirms that ideal and gives the solemn assurance that the rights of women in law will be wholly honoured in the Indian Republic."[14] (emphasis mine).

Today, it is for us to revisit Begum Aizaz Rasul's position and ask ourselves whether both women and minority communities have been ensured justice and equality after more than 70 years of independence or have we regressed from that constitutional promise?

(Note- In the next second part of the article on Begum Aizaz Rasul, her position on fundamental rights, right to property and her proposal on naming the parliament as 'Indian National Congress' will be discussed)

(Surbhi undertook her LL.M. Dissertation research on feminist critique of Indian Constituent Assembly. She taught the same as seminar course at National Law University, Delhi in Autumn semester 2020. She can be reached at [email protected] )

[6] For example the question of special provisions for women in political sphere was also seen as 'extension of a wrong principle into women's sphere'. See- ANUPAMA ROY, GENDERED CITIZENSHIP: HISTORICAL AND CONCEPTUAL EXPLORATIONS 167 (Orient BlackSwan 2013).