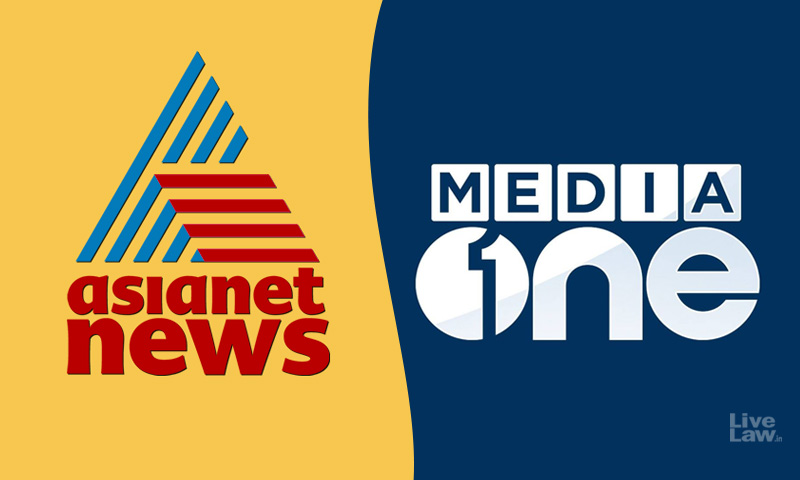 x
The ban has no support of law, and is wholly arbitrary and disproportionate.
Your free access to Live Law has expired
To read the article, get a premium account.

The unprecedented telecast ban imposed by the Ministry of Information and Broadcasting on Malayalam news channels Asianet News and Media One TV is vitiated with apparent legal errors. As a result of the ban, both the channels went off air at 7.30 PM on March 6, and can resume telecast only at 7.30 PM on March 8.

The ban orders issued in respect of these channels' coverage of the Delhi riots reek of arbitrariness and vagueness and are glaringly disproportionate.

As regards Media One, objection was taken to a 30 minute telecast stated to have been made at 6.10 AM on February 25. That report, in essence, stated the following :

With respect to Asianet News, a 10-minute telecast stated to have been made at 6.58 PM of February 25 was the issue. That was an account by journalist P R Sunil, based on things stated to have been witnessed by him from ground zero. In the report, he stated :

The reporter added that even his religion was asked by the rioters, and commented "I have not seen such a situation in Delhi and I was forced to disclose my religion to continue reporting". According to him, the situation was similar to 1984 anti-Sikh riots.

No claim by Ministry that reports are fake

It is striking to note in the ban orders that the Union Ministry does not say that the reports by these two channels are false or baseless. The authenticity and veracity of the reports are left undisputed.

As regards the report of Media One, the reasoning portion of the order states:

"Such reporting could enhance the communal disharmony across the country when the situation is highly volatile. The Ministry has time and again issued Advisories to all News Channels to comply by the provisions of the rules. Due care and responsibility is expected while reporting news based on such incidents. However, it is abundantly clear that the channel has not adhered to the Programme codes and has shown irresponsibility by not fully complying to them".

Curiously, the introductory part of the order against Media One has totally unwarranted remarks such as "It also questions RSS and alleges Delhi Police inaction. Channel seems to be critical towards Delhi Police and RSS".

With respect to the report of Asianet News, the reasoning portion of the order states :

"While reporting such critical incident, the channel (Asianet News T\/) should have taken utmost care and should have reported it in a balanced way. Such reporting could enhance the communal disharmony across the country when the situation is highly volatile. The Ministry has time and again issued Advisories to all News Channels to comply by the provisions of the rules. Due care and responsibility is expected while reporting news based on such incidents. However, it is abundantly clear that the channel has not adhered to the Programme codes and has shown irresponsibility by not fully complying to them".

So, it is clear that the Ministry has no claim that the channels reported fake news. The punitive action is based on a speculative assessment of the Ministry that the reports "could enhance" communal disharmony. The Ministry also passes an opinion that the report of the Asianet should have been "in a balanced way". But the order does not offer any further clarity on what was meant by the "balanced way".  Are media organizations supposed to function as per Government's subjective notions of "balance"?

Both channels reported certain facts, the truthfulness of which are not disputed by the Ministry itself. The reports also alleged inaction and also complicity on the part of Delhi police and the Central Administration. It may be noted that there are several other media reports which put similar blame on the Delhi police. There are also other reports about journalists being asked about their religion during their coverage of riots.

So, these two channels were performing the basic functions of media - reporting facts, and holding government to account. But they had to face penalty for failing to act in accordance with some subjective, vague and uncertain notions of the Ministry.

The conclusions made by the Ministry, based on their subjective assessment, are that the Reports violated Rule 6(1) (c) and 6(f) of the Programme Code laid down under Cable Television Network Rules 1994.

Rule 6(1)(e) is a prohibition against telecast of any program which "Contains attack on religions or communities or visuals or words contemptuous of religious groups or which promote communal attitudes".

Rule 6(1)(f) is a prohibition against any program which "Is likely to encourage or incite violence or contains anything against maintenance of law and order or which promote anti-national attitudes".

The vagueness and overbreadth of these Rules, and their potential for abuse to impose undue censorship, is a matter for another discussion. Regardless of that, the legally baffling aspect of the orders is that, when the Ministry itself does not dispute the truthfulness or correctness of the reports, how can these Rules be invoked? As is clear to any rational minded person, the reports do not contain anything expressly inflammatory or inciting. Or, is the Ministry hinting that the channels should have deferred the reporting to a more appropriate time, when the violence has subsided? If that was the case, the order should have specifically mentioned the same. The advisory issued by the Ministry on February 25 to channels do not forbid the reporting of news related to riots. In case the Ministry was of the opinion that the immediate reporting of riots news might not be "conducive" for communal harmony, it should have issued a clear and categoric direction to all news channels that they should not report anything at all related to riots until the situation has improved. But that was not the case.

The advisory issued by Ministry on February 25 was equally vague, asking channels to refrain from reporting anything "likely to encourage or incite violence, or which 'promotes anti-national attitudes' or 'communal attitudes'. One may also note that both these channels are Malayalam channels, having negligible viewership among Hindi-speaking people in the riot hit parts of Delhi. So, the assessment that the reports could have incited communal disharmony seems to be an exaggeration.

The orders, which abundantly employ tentative terms like "should have" "could"  etc, negate the basic principle of adjudication that a punitive order should be founded on firm and certain facts and not conjectures.

Coming to the legality of the orders.

The ban orders refer to powers under Sections 20(2) and 20(3) of the Cable Television Networks (Regulation) Act 1995, and Clause 8 of the Uplinking of Channels from India Guidelines 2011.

Section 20(2) of the Act provides that where the Central Government thinks it necessary or expedient so to do in the interest of the (i) sovereignty or integrity of India; or (ii) security of India; or (iii) friendly relations of India with any foreign State; or (iv) public order, decency or morality, it may, by order, regulate or prohibit the transmission or re-transmission of any channel or programme.

Section 20(3) provides that where the Central Government considers that any programme of any channel is not in conformity with the prescribed programme code, it may by order regulate or prohibit the transmission or re-transmission of such programme.

Now, the conclusions of the Ministry are that the programmes of the channels violated the Programme Code. That is the premise for invoking Section 20(3). There are no findings that channels or the programme as a whole acted contrary to (i) sovereignty or integrity of India; or (ii) security of India; or (iii) friendly relations of India with any foreign State; or (iv) public order, decency or morality. Hence, there is no basis in the order for referring to Section 20(2). So, the mention of Section 20(2) in the order is merely superfluous.

Therefore, the only relevant statutory provision is Section 20(3) of the Cable TV Act. According to this provision, the ban can be imposed only against the programme which was found to be violating the Programme Code and not against the Channel as a whole.

The order next refers to Clause 8 of Uplinking Guidelines to source the power to ban channels. It may be noted that these are just policy guidelines framed by the Ministry. They have no statutory backing or force. It is elementary rule that fundamental rights can be curtailed only on the basis of a law passed by legislature. Policy guidelines cannot do that.

So, the ban has no support of law, and is wholly arbitrary and disproportionate.

The timing of the orders, whether by design or default, ensured that the channels are left with no legal remedies.

The orders were passed on a Friday night, imposing 48 hours ban over weekend. This means that the channels will not be able to approach Courts challenging it.  By the time a legal challenge is mounted, it will be a situation of fait accompli.

The overall impression from the contents of the orders and the manner of their passing is that the channels had to pay the price for reporting certain facts, which were not palatable to the Government. To send a warning signal to the media, the wide and vague powers under the Cabe TV Act were imposed. But the glaring abuse of power in this case is that, the orders are not satisfying even the inherently vague standards under the Cable TV Act.

Before concluding, it is apposite to refer to a quote from George Orwell's 1984

"In times of universal deceit, telling the truth is a revolutionary act".

(Update : After the publication of this article, it was known that the Ministry lifted the ban on Asianet News during the early hours of the day. However, the ban on Media One TV continues)

(Further Update : The ban on Media One TV was lifted around 10 AM today)