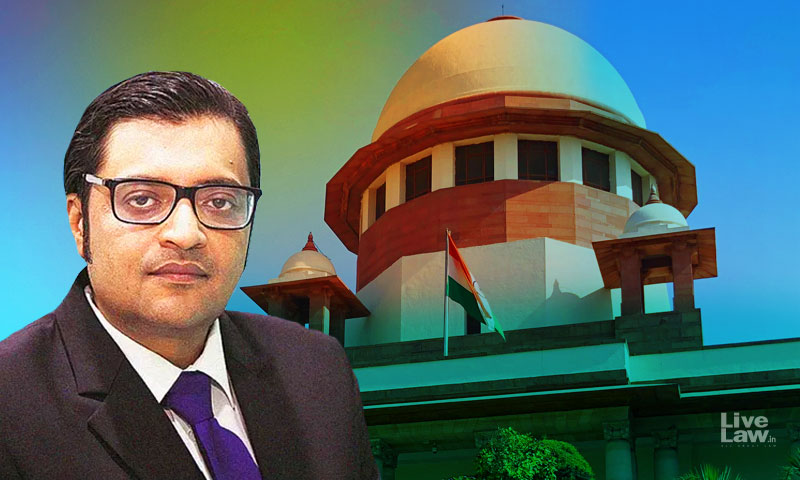 While hearing the Arnab Goswami's Case in court, Hon'ble Justice D.Y. Chandrachud remarked: "If we don't interfere in this case today, we will walk on path of destruction. If left to me I won't watch the channel and you may differ in ideology but Constitutional courts will have to protect such freedoms..." "Forget Arnab Goswami for a moment, we are a Constitutional court.... If we as...

"If we don't interfere in this case today, we will walk on path of destruction. If left to me I won't watch the channel and you may differ in ideology but Constitutional courts will have to protect such freedoms..."

The Indian Judiciary is vested with power to protect under Articles 32 and 226 in the form of Writs and Public Interest Litigation(PIL), to deal with every public grievance and the flagrant violations of human rights and individual freedoms by the State. What transpired  before the Supreme Court in the case of Arnab Goswami is a treat to a common man's eyes and is a reminder of that power of protection given to the Court. The India Judiciary is, in fact, duty bound to stand up for the rights of the people in general and is obliged to protect them from a tyrannical and exploitative State. For this purpose, Articles 32 and 226 were inserted in the Constitution of India by the constitution makers. The provide for remedies available to the common man in case of infringement and violation of their Fundamental Rights contained in Part III of the Constitution. In the instant case, regardless of whether the relief was given, the Supreme Court fulfilled the role of being the guardian of fundamental rights of the people. The reason being that the Highest Court of the nation came to the rescue of the individual by listing the matter before it immediately and affording that individual a proper hearing before proceeding to grant the interim relief as prayed. The questions of personal liberty, including right against illegal detention, of an individual guaranteed under Article 21 read with Article 22 and the arbitrariness of a State action under Article 14 were involved. The judiciary inherently is the sentinel qui vive. A Constitutional bench of the Apex Court dealt with the issue of illegal arrest and the arbitrariness of state action in the case ADM, Jabalpur vs. Shivakant Shukls, (1976) 2 SCC 521, wherein a Writ of Habeas Corpus and the power of the Constitutional Court in the context of illegal arrest was discussed at length.

I do not agree with his style of journalism.He has repeatedly attacked various individuals, organisations, institutions with his own motives and has possibly contributed more than most, if not the most, in disturbing peace in our nation and has promoted an environment which has rendered a nation divided and destroyed law and order in many instances. But that is how I feel about him and what he does personally.

Having said that, we are all aware of the events that led to the filing of the instant appeal before the Supreme Court of India, therefore, I will forgo reiterating those facts here for sake of brevity. The one fact which deserves to be mentioned here is theletter written by Mr. Dushyant Dave, Senior Advocate and the President of the Supreme Court Bar Association to the Registrar of the Supreme Court of India questioning why such urgency is not shown in other similar matters. The reason why the letter deserves a special mention is because it raised a very pertinent and disturbing issue, and is in a way a mirror to the judiciary of which I am also a part. The fact remains that there are several individuals who are languishing in jail while their matters are kept pending for months and even years in various courts of our country, including writs under Articles 32 and 226 of the Constitution of India. A recent example of the same would be the various petitions under 226 and 32 filed by hundreds of persons before the High Court of Jammu and Kashmir and the Supreme Court alleging political vendetta, exploitation and tyranny at the hands of the State post abrogation of Article 370 of the Constitution of India. Some persons were under house or general arrest for several months. Many of them are still behind bars waiting to be heard. These are more recent examples. Another specific example would be of Dr. Khafeel Khan who was a victim of such alleged political vendetta. He was slapped with various charges from time to time, including charges under the National Security Act. The NSA charges were later quashed by the HighCourt at Allahabad for being illegal and without basis but by then he has faced jail time and harassment for being deprived of his right to personal liberty and human dignity. Dr Khafeel Khan is just one of the several examples that come to mind when it comes to political vendetta and prosecution. Every other day a journalist and activist is booked under draconian penal laws, like sedition, for discharging their duty just like Mr. Arnab Goswami was under another charge. They and many are waiting to be saved by the Indian Judiciary from the alleged political prosecution at the hands of the State.

The Courts have held time and again that the Court is duty bound to interfere when there is arbitrariness, irrationality, mala fides and bias. It has to discharge this constitutional obligation to protect an individual's freedom and personal liberty. In a country like India where there is gross imbalance between the powerful political class and the subjects, it is imperative for the judiciary to guarantee human rights to the subjects. The Fundamental Rights of an individual were included in the Basic Structure under the Basic Structure Theory propounded in the case of Kesavananda Bharati, (1973) 4 SCC 225. The Fundamental Rights under Part III of the Constitution of India are an inalienable part of the Constitution and that theory remains the bedrock of the Indian Constitution till date. Right to personal liberty, life and to live with human dignity is a fundamental right guaranteed to all and not just the rich and powerful. It should be given effect to in a similar manner as all subjects are equal.

Mr. Arnab Gowswami's Case is a perfect example of why all such matters dealing with personal liberty and life as contained in Articles 21 and 22 should be heard and decided with utmost urgency and importance, especially in these times of pandemic. Hopefully, the order in the case of Arnab Goswami will be a reminder to us all and would also be a precedent for affording equal protection to all(Article 14) against arbitrariness and unreasonableness of State action as is envisaged in the Constitution of India.

(Author is a practicing Lawyer at The Supreme Court of India)