The Near Impossible Burden Of Proof For Citizenship 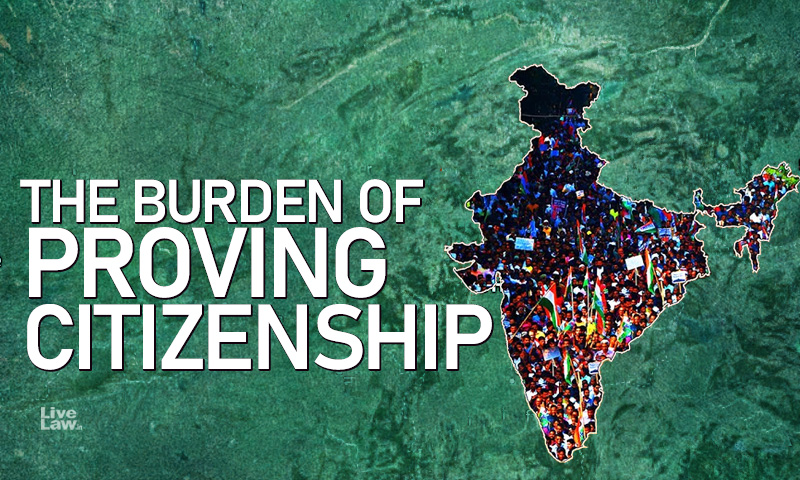 x
Though there are some legal proceedings where documents are admissible even without proof by issuing authorities, no such relaxation is given for proving citizenship.

In an earlier article, this author had written about the lack of clarity over the documents which can establish citizenship. This piece will discuss the problems created by placing an unrealistic and harsh burden on a person for proving a document upon which reliance is placed to establish citizenship.In the context of Assam-NRC, the Gauhati High Court has been consistently holding that...

In an earlier article, this author had written about the lack of clarity over the documents which can establish citizenship. This piece will discuss the problems created by placing an unrealistic and harsh burden on a person for proving a document upon which reliance is placed to establish citizenship.

In the context of Assam-NRC, the Gauhati High Court has been consistently holding that in a proceeding before Foreigner Tribunal, a document cannot be used to establish citizenship unless its contents are proved by the person who issued it. In a recent decision (Sahera Khatun vs Union of India and others), the Guahati HC held that a school certificate cannot be admissible in evidence before Foreigners Tribunal unless it was proved by the Headmaster who had issued it. In another decision (Rabia Kahtun v Union of India and others), the Court refused to accept the Marriage Certificate and the Gaonburah Certificate as evidence of citizenship on the ground that they were not proved by the testimonies of issuing authorities

While this approach is seemingly harsh, one must also remember that it is a general rule of evidence that a document, to be admissible in evidence, must be proved by the person who created it. But, is this an absolute principle which cannot be relaxed under any circumstance?

There is a provision in the Land Acquisition Act 1894 (Section 51A), which states that certified copy of a sale deed is admissible in evidence to prove the transaction recorded in that document. Similar provision can be found in the Right to Fair Compensation and Transparency in Land Acquisition, Rehabilitation and Resettlement Act 2013 (Section 97).

In a proceeding relating to compensation with respect to compulsory land acquisition, sale deeds pertaining to a comparable neighbouring land are most often used to show the market value of the acquired land. As per the normal rule of evidence, a document is not admissible in evidence unless its contents are proved by the author of the same. The application of this general rule in land acquisition proceedings can lead to practical hardships, as it may not be possible to trace out the vendors of sale deeds in adjacent lands. Taking note of this, Section 51A was introduced in the Act to dispense with the requirement of examining the vendor or vendee of the sale deed in a proceeding relating to compensation.
The SC explained the intent behind this provision in the case Cement Corporation Of India Ltd vs Purya & Ors as follows :

"The practice had shown that for the State officials it was a burden to trace out the persons connected with such transactions mentioned in the sale deeds and then to examine them in court for the purpose of proving such transactions. It was in the wake of the aforesaid practical difficulties that the new Section 51A was introduced in the LA Act".

Similar provisions dispensing with the requirement of examining the author of a document can be found in other statutes as well. Section 293 of the Code of Criminal Procedure  enables the court to use report of a Government Scientific Expert as evidence, even without examining any person as a witness in a court for that purpose. Section 13(5) of the Prevention of Food Adulteration Act likewise makes the report of a Public Analyst admissible in evidence even without the testimony of the person who issued the same.

No relaxation for this rule of evidence in Foreigners Tribunal

What emerges from the above discussion is that, while a person can use a document as evidence without examining the author of the same for seeking higher compensation for acquired land, such liberty is not available to one to prove citizenship. The absolute application of this rule of evidence in citizenship proceedings is an anomaly, given the exceptions granted to it in other proceedings. Certainly, citizenship is a more important right for a person than property rights.

In many cases, the following pattern can be found. The petitioner would produce certain documents to show linkage with any ancestor who had lived in Assam before the cut-off date of March 24, 1971 prescribed by the Assam accord. The Tribunal would reject the documents stating that the authorities who had issued them were not examined. The petitioner would also produce some person projected as the parent, sibling or spouse. But their oral testimony would be discarded on the ground that it is not supported by documentary evidence (as the document is not proved by the issuing authority).

In the case of Sahera Khatun, the Court insisted that the school certificated produced by her should have been proved by the oral testimony of the headmaster who had issued it.  The school in question was one recognized and aided by the Government ('provincialised school'), and the teachers there were paid out of the funds of the government. But the Court was not prepared to treat this fact as a ground to accept the document.

"Although an argument can be made that since the school in question at Exhibit-9 is a provincialised school and on that account the Certificate is admissible in evidence, we may observe that a document which is found admissible is not the end of the matter. The content of the same has to stand proved through the legal testimony of the Issuing Authority. In the present case the Headmaster of the school in question was not examined to prove the contents of the Certificate", observed the HC division bench of Justice Manojit Bhuyan and Parthivjyoti Saikia.

It is not hard to imaging the practical difficulty in producing the headmaster who issued a school certificate several years ago (and in some cases several decades ago) in the proceeding before the Tribunal. One may wonder why the Tribunal/Court did not take any steps on its own to cause the appearance of the Headmaster of the 'provincialised school' before it. The judgment contains an answer to this possible query. The Court states that it is the burden of the individual to prove citizenship.

"As the primary issue in a proceeding under the Foreigners Act, 1946 and the Foreigners (Tribunals) Order, 1964 relates to determination as to whether the proceedee is a foreigner or not, the relevant facts being especially within the knowledge of the proceedee, therefore, the burden of proving citizenship absolutely rests upon the proceedee, notwithstanding anything contained in the Evidence Act, 1872. This is mandated under section 9 of the aforesaid Act, 1946. In the instant case and as observed above, the petitioner not only failed to discharge the burden but also utterly failed to make proof of the most crucial aspect, that is, in establishing linkage to her projected parents and/or the grandfather"

The near impossible burden to prove citizenship

The burden of proof to prove citizenship is placed on the individual on account of a statutory provision - Section 9 of the Foreigners Act 1946, a colonial legislation.

The logic behind this, as explained by the Supreme Court in Sarbandana Sonowal case, is that the facts relating to one's legacy and origin will be in the special knowledge of the individual. In this case, the SC struck down the Illegal Migrants (Determination by Tribunal) Act 1983, which had placed the burden of disproving citizenship on the State. It was held in that case that this reversal of burden was arbitrary as it made the process of identification of illegal migrants difficult.

The Court held that its decision was  "in accordance with the underlying policy of Section 106 of the Evidence Act which says that when any fact is especially within the knowledge of any person, the burden of proving that fact is upon him"

Placing the burden of proving citizenship on the individual might sound reasonable when applied against a foreigner who is immediately found to be in the territory of India.  But when this is applied against persons who had been living here for several decades, it could lead to harsh results, such as the case of Sahera Khatun mentioned above. An examination of the Guahati High Court orders arising from Foreigner Tribunals reveal that most of the petitioners are in their forties and fifties; some even in sixties.

Advocate Aman Wadud, a Gauhati-based lawyer dealing in matters relating to citizenship and Foreigners Act, commented about the irrational application of rules of evidence by Foreigners Tribunals.

"The Honble SC in the Union of India vs Madras Bar association 2010(11) SCC1 said that the Tribunals should not be restricted by strict rules of evidence law. But the Foreigners Tribunal in Assam selectively applies evidence law. It strictly applies evidence law when it comes to proving of a private documents, but often rejects oral evidence of relatives including brother and parents contrary to Section 50 of the Indian Evidence act. Mostly women become victims of such selective application of evidence law and are stripped of citizenship. That doesn't make them an "illegal migrant". Just that they fails to prove citizenship because of hyper technical reasons".

In this context,  it is apposite to refer to a decision of Delhi High Court, where the citizenship of a 24 year old woman, who was born and brought up in India, was under question (Prabhleen Kaur v Union of India).

According to the Centre, there were doubts that her parents hailed from Afghanistan, despite their claims of having been born in India.

Rejecting the objections of the Centre to granting her passport, the High Court observed :

The Court also noted that the petitioners' parents had been residing in India for over four decades, and were even issued documents such as passports.

"..the nationality of a person who was admittedly residing in India as a citizen for the last 48 years, cannot be questioned. Raising such issues at this stage is plainly unreasonable and in this Court's view, impermissible", the Delhi HC had observed.

In conclusion : when a person had been living in India for several years, exercising rights ordinarily regarded as available to citizens such as voting in elections, receiving state benefits, holding land, paying tax etc., there should be a presumption of citizenship, and the burden should be on the State to rebut the presumption by presenting contrary evidence.