UAPA For Maoist Pamphlets : A Shocking Instance Of Thought Policing 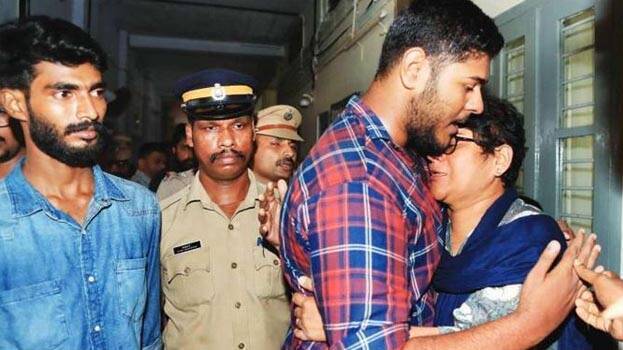 The arrests of two CPI(M) activists by Kerala police under the draconian Unlawful Activities(Prevention) Act over pro-Maoist pamphlets have ignited debates on this anti-terror legislation.The police claimed that they seized from the activists "suspicious pamphlets" aimed at propagating Maoist ideology. The arrested persons, Alan Suhaib and Thaha Faizal, both aged 20 years, were...

The arrests of two CPI(M) activists by Kerala police under the draconian Unlawful Activities(Prevention) Act over pro-Maoist pamphlets have ignited debates on this anti-terror legislation.

The police claimed that they seized from the activists "suspicious pamphlets" aimed at  propagating Maoist ideology. The arrested persons, Alan Suhaib and Thaha Faizal, both aged 20 years, were slapped with UAPA sections 20 (Punishment for being member of terrorist gang or organisation), 38 (Offence relating to membership of a terrorist organisation), 39 (Offence relating to support given to a terrorist organization) and the Court has remanded them to 15 days custody.

Alan and Thaha, who are studying law and journalism respectively, were allegedly distributing pamphlets criticizing the alleged encounter killing of four Maoists in the Manjakkatti forests in Kerala's Palakkad district.

Can arrests on the basis of books and pamphlets be justified on the basis of judicial pronouncements which explain the circumstances under which a person can be regarded as a member of an unlawful organization?.

In that case - Arup Bhuyan v State of Assam - a bench comprising Justices Markandey Katju and G S Mishra held that there is no concept of 'guilt by association' in Indian law - meaning that a person cannot be punished merely on the basis of company he keeps.

Reading down Section 3(5) of the TADA Act, the top court observed that mere advocacy of violence as a means of accomplishing political or social reform, or publishing or circulating or displaying any book or paper containing such advocacy is not per se illegal. It will become illegal only if it incites to imminent lawless action. The Court held that literal application of Section 3(5) of TADA, which dealt with membership in unlawful organization, will lead to infringement of fundamental rights under Articles 14 and 19.

Last May, the SC upheld the bail granted to an alleged Maoist sympathizer by stating that mere membership in a banned organization will not lead to the inference of having committed a terrorist act.

In short, the SC has unequivocally held that a person cannot be regarded as a criminal only on the basis of membership or connection to a banned organization.

If that be so, it logically flows from this dictum that it is not a crime to possess books or literature containing the ideology of a banned organization.

Seen in the light of these judicial pronouncements, the arrests of these two students by Kerala police on the basis of their books and pamphlets raise some questions.

Is it a crime to keep Maoist literature?

In this context, it is relevant to recall the landmark verdict of Kerala High Court in the Shyam Balakrishnan case, where Justice Muhamed Mustaque held :

"Being a Maoist is no crime, though the political ideology of Maoists does not synchronize with our constitutional polity. It is a basic human right to think in terms of human aspirations. The freedom of thought and liberty of conscience is a natural right and cannot be surrendered by any human being and that freedom is ingrained in human mind and soul. However, that freedom becomes unlawful when it confronts with the positive laws of the State. If the Maoist organisation is a proscribed organisation under law, activities of the Maoist organisation can be interfered. If an individual or organisation abhors and resorts to physical violence, law agency can prevent or take action against that individual or organisation. It is only when private thoughts or ideas become repugnant to the public values as envisaged under law, the private activities become unlawful. Therefore, Police cannot detain a person merely because he is a Maoist, unless Police forms a reasonable opinion that his activities are unlawful."

There the Court ordered Rs 10 lakhs compensation to the petitioner, who was illegally detained for suspected Maoist links.

Upholding this judgment by dismissing the appeal by Kerala Government, the division bench of Chief Justice Hrishikesh Roy (since elevated to SC) and Justice Jayasankaran Nambiar held :

"The freedom of an individual to hold a particular political ideology is an aspect of his fundamental right to personal liberty under Article 21 of our Constitution in that he has the unfettered freedom to choose an ideology of his liking .Accordingly, merely on a suspicion that the petitioner has embraced the Maoist ideology, he cannot be persecuted by the State authorities."

The direction in this judgment has been stayed by the Supreme Court on appeal by the government.

Slapping of UAPA against persons merely on the basis of the books they read and pamphlets they keep shockingly smacks of 'thought policing'.

The extension of the coercive limb of the State into the cerebrum of an individual to control his thoughts and ideas is not at all contemplated by our Constitution, which places individual as its basic unit.

This was clarified by the Supreme Court in a 1983 decision where it said :

"India is not a police state. India is a democratic republic".

Justice Chinnappa Reddy observed in that judgment that it is the liberty of thought granted by the Fundamental Rights which marks India from authoritarian or police States.

In State of Kerala vs Raneef, decided in 2011, the Supreme Court upheld the Kerala High Court's grant of bail to a person accused of UAPA offences, for merely belonging to an unlawful organization without any active participation. The prosecution in that case had argued that the accused was in possession of literature of 'Jihad'. The Court noted that there was no prima facie evidence against the accused to warrant the restrictions on bail under S. 43(D)(5) of UAPA.

While granting bail to human rights activist Dr Binayak Sen in a UAPA case, the Supreme Court observed that mere possession of Maoist literature will not make one a criminal.

In Vishvanath vs State of Gujarat, another UAPA case built on possession of Maoist literature/propaganda, the Gujarat High Court held that

"possession of such material without there being any overt act or actual execution of such ideas by itself would not form or constitute any offence."

For a proponent of civil liberties, it is highly distressing to see the police continuing to invoke UAPA indiscriminately overlooking clear judicial pronouncements.

It is to be noted that it is highly difficult to get bail under UAPA. The provisions of this law allow police to keep a person in custody up to 180 days  without filing chargesheet. This means that police can detain a person for nearly six months without trial merely on the basis of his books or pamphlets.

There have been instances of UAPA charges being slapped against people for merely possessing revolutionary literature. This is dangerous, and as absurd as branding someone as a Nazi because he was seen in possession of Adolf Hitler's autobiography the 'Mein Kampf'.

To label a person criminal or a terrorist merely on the basis of speech and thoughts goes against the basic Constitutional canon that speech can be punished only if it gives rise to direct and imminent violence.

The issue highlights the danger in conferring sweeping powers on the police under draconian laws.

It is worthwhile to conclude by noting a comment made by Professor K T Shah during the Constituent Assembly debates that  "The autocrat, the despot, has always wished, whenever he was bankrupt of any other argument, just to shut up those who did not agree with him".

Draconian laws such as UAPA are being mostly used to silence free thinking individuals, who make an authoritarian state feel insecure.

(The author is a student of Government Law College, Ernakulam. Views are personal)