Why SC Order In Karnataka MLAs Case Goes Against The Spirit Of Anti-Defection Laws? 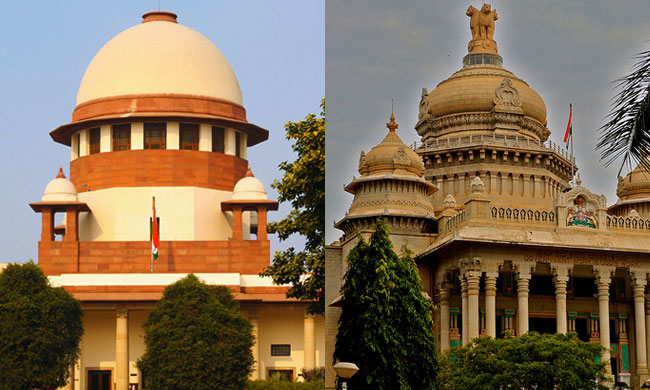 x
In the name of maintaining 'constitutional balance', the Court passed an order nullifying the effect of Clause 2(b) of Schedule 10 of the Constitution.

The Supreme Court walked a tight rope to maintain 'constitutional balance' in the Karnataka MLAs' case.The rebel MLAs wanted their resignations to be accepted fast by the Speaker and pleaded that they should not be forced to attend the House. The Speaker said that MLAs have already incurred disqualification under Tenth Schedule of the Constitution and urged that the Court cannot direct...

The Supreme Court walked a tight rope to maintain 'constitutional balance' in the Karnataka MLAs' case.

The rebel MLAs wanted their resignations to be accepted fast by the Speaker and pleaded that they should not be forced to attend the House.

The Speaker said that MLAs have already incurred disqualification under Tenth Schedule of the Constitution and urged that the Court cannot direct the Speaker to take decisions within a time frame.

The MLAs raised the concern that decision on resignation is being delayed so as to force them to support the incumbent government in the trust vote, lest they will face disqualification for violating the party whip.

The matter witnessed a marathon hearing, with arguments based on Articles 190, 212 and Tenth Schedule of the Constitution.

On Wednesday(July 17), the bench of CJI Ranjan Gogoi, Justices Deepak Gupta and Aniruddha Bose passed an interim order giving Speaker as much time as he required to decide on resignations, and permitting the MLAs to stay out of the House proceedings, if they choose to do so, until further orders.

"We also make it clear that until further orders, the 15 members of Assembly ought not to be compelled to participate in the proceedings of the ongoing session of the House and an option should be given to them that they can take part in the said proceedings or to opt to remain out of the same", ordered the Court.

This was passed after the Court observed that "The imperative necessity, at this stage, is to maintain the constitutional balance and the conflicting and competing rights that have been canvassed before us".

The seemingly innocuous portion of the order which says that the MLAs cannot be compelled to attend the house proceedings has potential for a lot of repercussions, especially in view of the trust vote of the Congress-JD(S) government scheduled to take place tomorrow.

It is relevant to note that the Court was conscious of the trust vote tomorrow, as this fact is specifically recorded in the order.

"Such an interim exercise has been prudent in view of certain time frame exercises(s) that is in the offing in the Karnataka Legislative Assembly, particularly, the non-trust motion against the present Government, which we are told is due for being taken up on 18th July, 2019", the bench observed in this regard.

The liberty given by the apex court to dissident legislators will in effect enable them to defy any party whip issued to them to attend the trust vote tomorrow, and thereby to ward off any consequences of disqualification.

As per Clause 2(b) of Schedule 10 of the Constitution, abstaining from voting in House contrary to any direction issued by the political party to which the legislator belongs to will cause disqualification on the ground of defection.

Acceptance of resignation a matter of Speaker's discretion.

If one examines the constitutional scheme, it becomes clear that acceptance of resignation by the Speaker is not a matter of right of a legislator. It is the Speaker's discretion.

This is clear from proviso to Article 190(3(b) of the Constitution, which says that the Speaker shall not accept the resignation if he is satisfied that it was not voluntary or genuine.

The Speaker had argued before the Court that the enquiry into resignation is inextricably linked with disqualification proceedings under Schedule 10. The inter-connection between these two proceedings is an issue which the Court said it will consider in detail later.

Anyhow, from the plain text of Constitution, two things follow :

That being so, how can a person, who continues to be an MLA with the resignation having not been accepted by the Speaker, claim a right to abstain from House proceedings, particularly in view of Schedule 10?

In the process of maintaining 'constitutional balance', the Court passed an order nullifying the effect of Clause 2(b) of Schedule 10 of the Constitution, enabling the rebel MLAs to escape the consequences of defying party whips.

According to me, the order goes against the spirit of anti-defection laws.