Denial Of Information For Lack Of Aadhaar Is A Serious Breach Of RTI Act: CIC [Read Order] 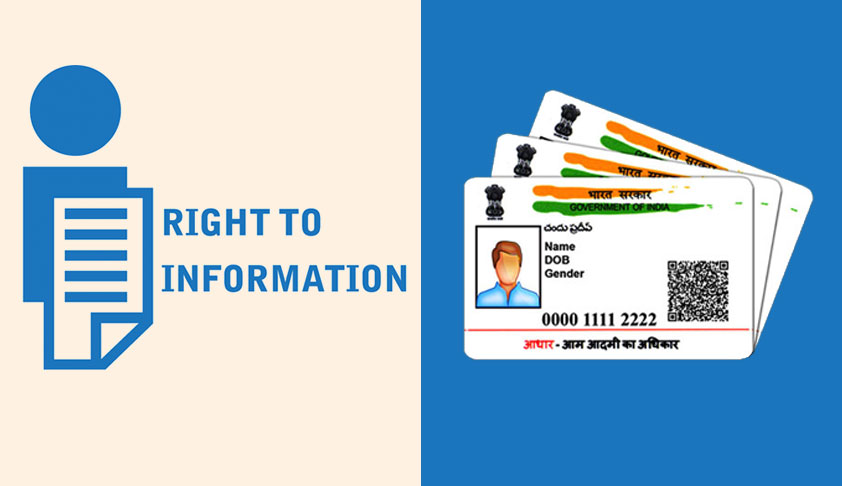 The Central Information Commission has recently held that denial of information for lack of Aadhaar card will be a serious breach of right, which was guaranteed by the RTI Act and also amounts to harassment of the applicant.

With the government-owned Housing and Urban Development Corporation Limited (HUDCO) claiming that it does keep record of lakhs of rupees it spends on gifts and mementos distributed as part of business promotion, the Central Information Commission (CIC) has recommended that the Comptroller and Auditor General (CAG) look into the claim and examine if such an unhealthy practice is permissible, wondering how the public authority is spending public money without any record.

CIC Prof M Sridhar Acharyulu has also recommended “the Ministry of Urban Development, Government of India to probe the expenditure of HUDCO and incorporate healthy records maintenance and accountability practices…”

The CIC has also directed the CMD, HUDCO, to “submit the copies of vouchers pertaining to spending of Rs. 28,22,897, file notes, list of the persons to whom the gifts are given, and the details of the business that was promoted because of this within one month”.

Complainant’s representative Mukul Jain submitted that “around five crore rupees worth malpractice is going on in HUDCO in the form of giving and receiving of gifts involving senior people in the Ministry, and it was not known who asked those gifts and who received”. He said gifts like iPhone, Mont Blanc pens and iPads were given to the senior authorities of their Ministry by Ravi Kant IAS, managing director of HUDCO.

CPIO DK Gupta wrote a letter to Bhamburkar on August 5, 2016, demanding the proof of identity and proof of address by producing Aadhaar card, Voter’s ID card or passport as proof of citizenship.

The applicant moved a complaint before the CIC and a first appeal in HUDCO asking for information without insisting on the proofs but first appellate authority Akhilesh Kumar confirmed the demand for proofs to establish the citizenship of the applicant.

When the CIC served notice, Gupta said HUDCO had received few RTI applications in the nature of motivated allegations where applicants were not residing at addresses given in the application and therefore, the CPIO was to ensure the genuineness of the applicants.

“The Commission records admonition against Dr DK Gupta, present CPIO Mr SK Gupta and First Appellate Authority for illegally insisting on Aadhaar Card etc. to prove citizenship, identity and address, and also demanding proof of citizenship. Denial of information for lack of Aadhaar card will be a serious breach of right, which was guaranteed by the RTI Act and also amounts to harassment of the applicant. The Commission requires the public authority to provide enough training in RTI to the CPIO, the First Appellate Authority and other concerned personnel as soon as possible,” the CIC said.

Prof Acharyulu said, “Most of the information sought was supposed to be given voluntarily by the public authority under Section 4(1)(b) of the RTI Act. Information about appointments, construction, travels of officers, purchases, financial status, expenditure on renovation, facts and circumstances about the policies etc. need not be asked by anyone, but to be disclosed suo motu. But two CPIOs and one First Appellate Authority acted like a team to stonewall the information and unhesitatingly denied on illegal grounds”.

How can any public authority spend public money without any record?

“How can any public authority spend public money without a record? They should have records for every pie they have spent. How do they account for it without records? They have a duty to tell where from they purchased, what did they purchase? Why? Given to whom? It’s a serious irregularity that openly facilitates corruption or misappropriation of public money, which needs to be probed. Whatever they have purchased, including high cost gadgets like apple iPhones, tablets, Mont-Blanc pens, they are bound to explain why they purchased and what they did with them. Why should those costly gifts lie in godown for a long time,” the CIC asked.

In its compliance report dated April 20, 2017, the HUDCO submitted that “Gifts/Mementoes/Souvenirs are part of normal Corporate Activity of Business Promotion and PR exercise and distributed based on occasions and no record is maintained in this regard”.

To this, the CIC said, “From this, following questions arise as part of answerability and accountability: What is the corporate business the HUDCO is doing? If they have really used it, how did they use it? To whom the gifts are distributed? To promotion of business, they should also prove how much business and what business they have promoted? It is a housing and urban development body. They are not real estate business dealers or developers. Whom did they give gifts and what business they promoted?”

The CIC then directed the CMD, HUDCO to “submit the copies of vouchers pertaining to spending of Rs. 28,22,897, file notes, list of the persons to whom the gifts are given, and the details of the business that was promoted because of this within one month”.

It further said, “The Commission recommends the Comptroller and Auditor General to take note of the admission and claim that the HUDCO spent lakhs of Rupees every year to purchase costly gifts without maintaining records, examine whether it is permissible, if not, take necessary steps to check unhealthy practices if any. The RTI Act is made with a purpose to empower the citizen to demand the financial indiscipline, challenge the irregularities and scandals by legally securing information. By purchasing lakhs worth gifts, not maintaining records, denying the information by using illegal tactics, harassing RTI applicant, the HUDCO proved that there is merit in the apprehensions of the applicant about corruption, which needs to be thoroughly probed”.