Situation At Lonar Lake Pathetic, It Occurred Because Of Callous Indifference Of Authorities Responsible For Conservation of the Lake: Bombay HC 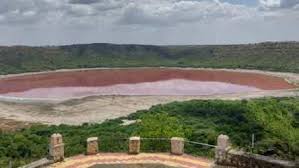 The Bombay High Court in a sharp rebuke of state and local authorities on Monday observed that the situation at Lonar Lake in Buldhana district of Maharashtra was 'really pathetic' and the situation arose mainly because of the callous indifference of many of the authorities responsible for conservation and preservation of Lonar Crater Lake. Division bench of Justice SB Shukre and Justice...

The Bombay High Court in a sharp rebuke of state and local authorities on Monday observed that the situation at Lonar Lake in Buldhana district of Maharashtra was 'really pathetic' and the situation arose mainly because of the callous indifference of many of the authorities responsible for conservation and preservation of Lonar Crater Lake.

Division bench of Justice SB Shukre and Justice AS Kilor of the Nagpur bench heard the eleven year old petition filed by lawyer Kirti Nipankar who raised concerns over the changing colour of the lake. Court noted that the Collector, Buldhana had failed in discharging fundamental duties.

Notably, Court said that the only department which is taking the whole matter seriously and also making effort to comply with various directions being issued by the Court is the Forest Department. Last month, Court had directed the National Environmental Engineering Research Institute (NEERI) and the Geological Survey of India (GSI) to submit an environmental impact assessment report.

The said lonar lake is a notified National Geo-Heritage Monument and was formed by a meteorite impact approximately 50,000 years ago. In the beginning of second week of June, the colour of the lake began to change to reddish pink colour and concerns were expressed about human defecation at the lake and discharge of sewage water of the entire Lonar city into the Lake but the exact reason is still unknown.

After perusing through the inspection report, Court said-

"We find that the situation obtaining at and around Lonar Lake is really pathetic. The pathetic situation has arisen, as we can see from the history of this PIL and what has been pointed out to us by the learned Senior Advocate and also all the Advocates including the Government Pleader assisting this Court, mainly because of the indifference rather callous indifference of many of the authorities responsible in their own way for conservation and preservation of Lonar Crater Lake. The primary responsibility in this regard, as we find from the record, is upon the shoulder of Collector, Buldhana and it is followed by the Chief Officer, Municipal Council, Lonar and P.W.D. officials."

CS Kaptan pointed out that nothing is happening in the Court Appointed Committee and he has raised several issues regarding the inaction of this Committee as well as non-implementation of various directions issued by the Court to this Committee.

NEERI's counsel Gauri Venkatraman, submitted that the new proposal has already been submitted to Municipal Council, Lonar for revamping of Sewage Treatment Plant and also increasing its capacity from the present 500 KLD (Kilo Liter per day) to 1000 KLD way back in November 2019.

Court made one query to Council's lawyer Advocate Kalmegh about the plan of action to immediately stop the free-flow of sewage water emanating from Lonar city into Lonar Crater Lake and noted "it appears to us that presently Municipal Council, Lonar does not have any such plan in its mind."

"It is necessary that the sewage water is prevented from flowing into Lonar Crater Lake immediately and it is diverted to some relatively safer spot for the time being. We direct Chief Officer, Municipal Council, Lonar to stop the flow of sewage water into Lonar Lake within three days from the date of the order and divert it to some other safer spot and submit his report to this Court on or before next date"

Moreover the Chief Officer, Municipal Council, Lonar was warned that if this direction is not complied with by him or the Council within the time prescribed, serious view shall be taken and Court would not hesitate in initiating contempt action against the officer and other persons found responsible for disobeying the directions issued.

Appearing on behalf of Geological Survey of India, ASG UM Aurangabadkar submitted that as directed GSI has conducted a survey of the pink water phenomenon of Lonar Crater Lake and it is slated to submit its report within a week's time. Furthermore, the land for establishing a Weather Monitoring Station has been identified and the machinery is also ready but because of the present lock down, machinery has not yet reached the site. As soon as transportation is permitted, the machinery would be dispatched and installed at the land identified in this regard, ASG told the Court.

Gauri Venkatram reiterated that samples of pink water of Lonar Crater Lake are being analyzed and analysis is required to be done repeatedly and therefore, NEERI needs some more time to furnish its report on the matter. Hopefully by July 11, 2020 the report would be ready and would be submitted to this Court, Venkatraman said.

In an order dated June 15, Court had issued several directions to the Collector, Buldhana, PWD, Buldhana and Municipal Council, Lonar. These authorities were directed to submit their reports on affidavit to this Court, but none of them has so far complied with these directions. These directions related to shifting of Lonar- Kinhi Road which is presently passing through the eco-sensitive zone containing a cover of impact ejecta debris, carrying out of environmental impact assessment by the PWD before starting construction of Lonar-Kinhi Road and obtaining of clearances from the environmental authority for construction of this road.

"No report inspite of the directions given by this Court has been submitted by the Collector, Buldhana. Adding salt to the injury, it now transpires that no instructions whatsoever in this regard have been given by the Collector to the learned Government Pleader. This only emphasises the seriousness of the statement made by the learned Senior Advocate and everybody assisting this Court at the beginning of the hearing. The statement has been that the situation obtaining at Lonar Crater Lake is really pathetic."

Noting the repeated non-compliance on behalf of the Collector, Buldhana, Court said-

We are of the prima-facie view that the Collector, Buldhana a district level representative of the Government of Maharashtra, has failed in discharging these fundamental duties in the recent past, thereby owing an explanation to this Court, for dislodgement of the prima facie impression.

"It is the fundamental duty of all of us to act in the matter and protect, preserve and improve this unique water body, a natural wonder, much more than a public property, and also develop scientific temper and spirit of inquiry by encouraging and promoting world-class scientific research of the water body, its properties, life present in the water body and entire geology of the area."

Thus, on July 22, the next date of hearing, all the responsible officers and heads of the Departments were directed to remain present through video conference before the Court, and to submit their respective replies on affidavit ensuring compliances in terms of various directions issued by this Court from time to time and in particular on June 15, 2020 and also today.