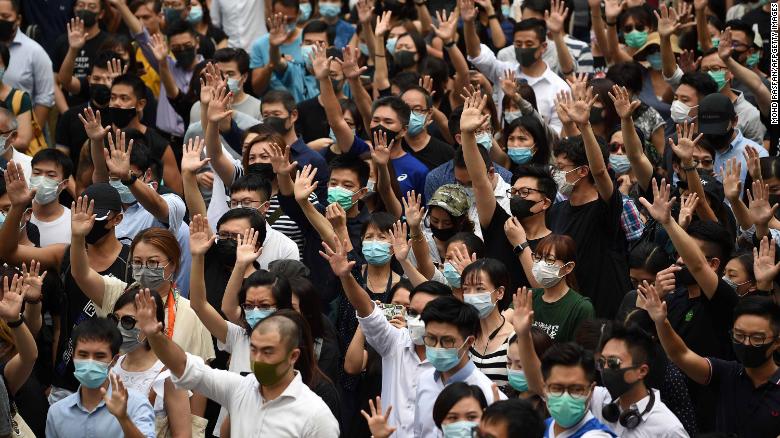 "Wearing facial coverings during a peaceful and lawful demonstrations would not be an offence."

The High Court of Hong Kong has held that legal provisions which bar the use of masks or facial covering while participating in a lawful public meeting and public procession are unconstitutional.

Section 3 of the Prohibition on Face Covering Regulation provides that a person must not use any facial covering that is likely to prevent identification while the person is at an unlawful assembly, unauthorised assembly, a lawful public meeting or procession. The Court at first instance had ruled that the entire ordinance prohibiting covering of face using mask in public places is unconstitutional. The Court of Appeals has now partly allowed the appeal by upholding the constitutionality of section 3(1)(b) which prohibits wearing of face masks while at unlawful and unauthorized assembly.

But if the meeting and procession remain peaceful and orderly, it is difficult to see the justification for imposing a restriction on the freedom of demonstration by way of prohibition of wearing facial coverings, the judges said agreeing with the finding that such prohibitions does not satisfy the proportionality test.

The Court also held that the section 5 of the PFCR which confers power on police officer to require a person using facial covering in a public place to remove such covering to enable the officer to verify the identity of the person.

Following are some important observations made in the judgment.

Insofar as section 3(1)(b) is concerned, it only bars the use of facial coverings at unauthorized assemblies. This measure should be assessed against the public danger experienced in Hong Kong from June 2019 onwards. It does not bar the exercise of the right of demonstration or freedom of expression generally. In other words, peaceful demonstration and assembly could still be held and the participants could adopt the wearing of facial coverings as a form of protest provided that the gatherings are authorized and held in accordance with the conditions imposed.

The wearing of facial coverings at unauthorized assemblies substantially impedes the effective law enforcement in terms of the identification and arrest of the radical and violent protestors who have crossed the line, which was the task of the police as highlighted in the judgment of Ribeiro PJ in HKSAR v Chow Nok Hang, supra. The inability of the police to pinpoint in a timely manner such radical and violent protestors and to segregate them from other demonstrators by arrests seriously impairs the power of the police to defuse potentially explosive situations and to exercise effective crowd control. The police became seriously handicapped in the performance of their duty to facilitate peaceful demonstration.

Thus, so long as those meeting and procession proceed in accordance with sections 7(1) and 13(1), there cannot be any serious public order or safety issues which warrant additional restrictions being placed on the same by way of prohibition to wear facial coverings. As we have seen, when such meeting or procession were hijacked by protestors with violent or disorderly disposition, there is ample power on the part of the police under the POO regime to issue an order under section 17(3) including an order to stop and disperse. Disobedience to such an order would turn the meeting or procession into an unauthorized assembly. 244. On the other hand, if the meeting and procession remain peaceful and orderly, it is difficult to see the justification for imposing a restriction on the freedom of demonstration by way of prohibition of wearing facial coverings.

Police Power To Demand Removal Of Face Masks Not Propotionate

Even though it does not involve a power of search, the exercise of the power would inevitably impose a temporary restriction on the liberty of the person who is subject to the request. Further, the section imposes a coercive sanction to back up a request for removal of facial coverings. Another facet of section 5 is the empowerment of a police officer to remove a facial covering worn by a person if that person fails to comply with a request for such removal. Though the extent of bodily contact for removal of facial coverings may not be as substantial as a detailed search of a person, it nonetheless authorizes bodily contacts which, from the point of view of a person subject to such treatment, is unwelcome and may even be offensive. Acts and conducts on the part of a person to deflect or resist such removal could be taken as obstruction to due execution of duties and thus bring serious consequences upon such person