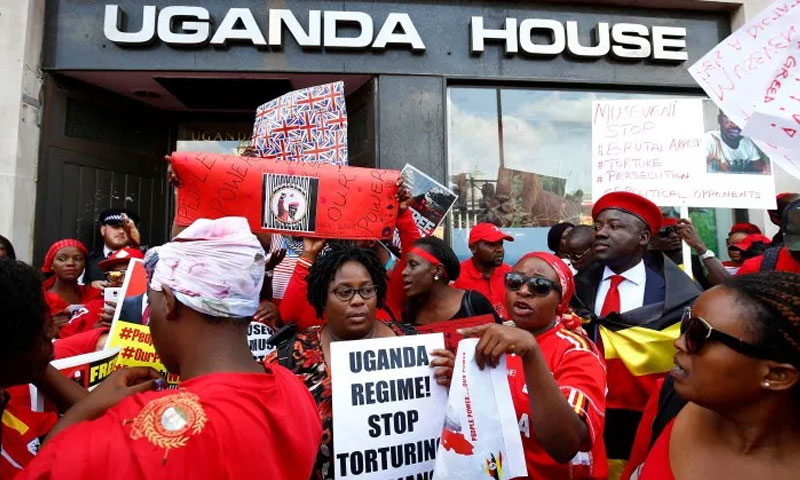 "Provided a protest or public gathering is peaceful, it does not matter that it may be disruptive or even inconveniencing due to the large numbers of individuals that may participate in the same."

The court struck down the provision on two grounds: (1) It is in pari materia with Section 32(2) of the Police Act that was struck down as unconstitutional earlier, and therefore violative of Article 92 of the Constitution of Uganda which prohibits Parliament from passing any law whose effect is to overturn a judgment of court as between two parties. (2) it violates Article 29 that guarantees freedom of assembly and the right to demonstrate peacefully and unarmed.

The Challenge and the Law

Human Rights Network Uganda, Development Network of Indigenous Voluntary Associations, Uganda Association of Women Lawyers, and Chapter Four had challenged the Act which was enacted on 20 November 2013, on the ground that it is in pari materia with Section 32(2) of the Police Act that was struck down as unconstitutional earlier (in Muwanga Kivumbi Vs Attorney General.)

The Section 8 of POMA grants discretionary powers to the Inspector General of Police (lhe lGP) who in turn can delegate or authorize any other officer to stop or prevent the holding of public meetings. An officer authorized by the IGP to issue orders dispersing a public meeting as he/she deems reasonable in the circumstances. While doing so he/she shall have regard to the rights of those to whom the order has been issued and other persons. Failure to adhere to orders issued therein above is an offence punishable under section 11 7 of the Penal Code Act.

The Court found that the provisions of Section 8 of the 10 Public Order Management Act 2013 are in pari materia with the nullified Section 32(2) of the Police Act. In the judgment authored by Cheborion Barishaki, he observed that to uphold Section 8 of POMA which authorizes the police to stop, prevent and disperse public meetings when a similar provision was nullified in Muwanga Kivumbi vs Attorney General would be to acquiesce in undermining the authority of the court. The judge said:

The Justices of the Constitutional Court who determined Muwanga Klvumbi vs Attorney General labored to explain, in individual judgments, the reasons why the police cannot be permitted to have powers to stop the holding of a public gathering including a protest or demonstration ostensibly on grounds that such public meeting would cause a breach of the peace. It is a pity that their explanations for nullifying Section 32(2) of the Police Act were contemptuously ignored by parliament and the executive.

Justice Barishaki further observed that the regulation of public gatherings must be done in good faith and without demonstrating or harboring animus against particular groups such as political players from the opposition or civil society groups expressing themselves on questions of the day. Following are some important observations made in the judgment.

Peaceful public protests are protected by the constitution.

World over, law enforcement organs in democratic states do not suppress public gatherings or peaceful protests in the name of protecting public order. Neither do they require that organizers of public meetings or peaceful protests must have prior permission or clearances from the police. Provided a protest or public gathering is peaceful, it does not matter that it may be disruptive or even inconveniencing due to the large numbers of individuals that may participate in the same.

Unregulated application by the Police sets limitations that are far beyond what is demonstrably justifiable in a free and democratic society.

Justice Kenneth Kakuru held that the Public Order Management Act through its unregulated application by the Police sets limitations that are far beyond what is demonstrably justifiable in a free and democratic society. The judge observed:

No evidence whatsoever has been provided to show let alone prove that, public gatherings stifle economic growth or disrupt business beyond what is justifiable in a free and democratic society. The Government and its agencies including security organs have frequently used demonstrations to publicise their own programs and to positively rally the public for just causes. In the recent past His Excellency The President led a huge demonstration across the capital highlighting the evils of corruption in public institutions. All the activities in the capital went to a standstill, but it was a welcome measure. The city carnival, spontaneous celebrations as such when the national football team "the cranes" qualified for the African Cup, the Martyrs' day processions, visiting dignitaries such as the Pope, the United States President, Nelson Mandela to mention but a few attracted huge processions and crowds in the capital bringing to a standstill almost all businesses. Nonetheless, none of those public gatherings did result into violence nor did they disrupt business, commerce or public order or trade beyond what is demonstrably justifiable in a free and democratic society. The point is that, in a democracy one cannot choose and pick. It is a whole package and everything goes together. Any attempt to remove one component destroys the other.

POMA embraces a regime of repression

In her concurring opinion, Justice Elizabeth Musoke observed that a mere apprehension of violence by protesters should not be used to stop an assembly. She observed:

Unfortunately, the POMA embraces a regime of repression aimed at curtailing the citizens' enjoyment of their right to assemble and demonstrate. This is wholly unacceptable. In my view the effect of the POMA legal framework is that it encourages the police to begin with a presumption that assemblies should be stopped unless authorized by the police. This means that in practice the police grants and takes away the right of freedom of assembly as it pleases.

The discretion to prohibit a peaceful procession or assembly that is guaranteed under the law should be exercised justly and transparently failing which clear, acceptable and justifiable rules on how that discretion is applied should be made.

Dissenting Opinion: There is no society that is devoid of regulation

There is no society that is devoid of regulation and certainly there is no democratic society which has no regulation on how individual or group rights should be exercised. If the constitution requires that the exercise of rights must be in conformity with the law, who then must enforce it and how should it be done? In the case of public meetings, the answer lies in the Public Order Management Act and section 8 of thereof is a crucial part of the process.