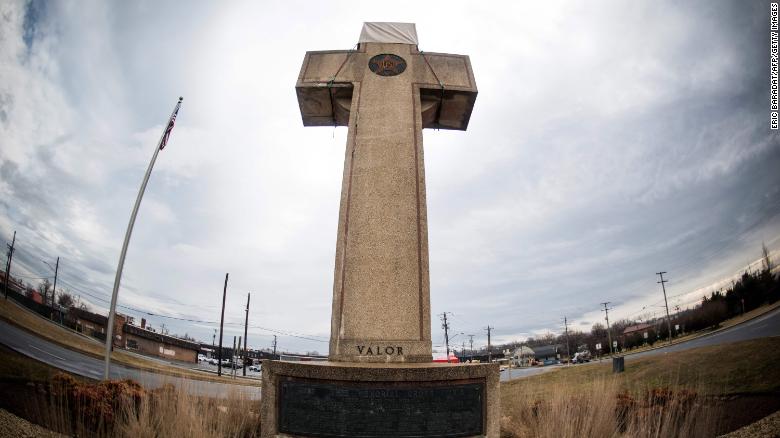 "With sufficient time, religiously expressive monuments, symbols, and practices can become embedded features of a community's landscape and identity. The community may come to value them without necessarily embracing their religious roots."

The Cross does not offend the Constitution, remarked the Supreme Court of United States while holding that Bladensburg Peace Cross War memorial is not unconstitutional.

In 1918, residents of Maryland, formed a committee to erect a memorial for the county's soldiers who fell in World War I. Since 1925, the Bladensburg Peace Cross (Cross) has stood as a tribute to 49 area soldiers who gave their lives in the First World War. In 2014, the American Humanist Association (AHA) and others filed suit in District Court, alleging that the Cross's presence on public land and the Commission's maintenance of the memorial violate the First Amendment's Establishment Clause. Though the District Court did not favour this argument, the Court of Appeals for the Fourth Circuit agreed that the memorial is unconstitutional.

The court noted that, though, the cross has been a Christian symbol since fourth century, in many contexts it has taken a secular meaning. As an example, it highlighted Red Cross—a red cross on a white background. The International Committee of the Red Cross selected this symbol for an essentially secular reason, and the current secular message of the symbol is shown by its use today in nations with only tiny Christian populations, the court said pointing out to the Indian and Japanese affiliates of the ICRC and Red Crescent Societies use the symbol of the cross. The court said:

"With sufficient time, religiously expressive monuments, symbols, and practices can become embedded features of a community's landscape and identity. The community may come to value them without necessarily embracing their religious roots. The recent tragic fire at Notre Dame in Paris provides a striking example. Although the French Republic rigorously enforces a secular public square, the cathedral remains a symbol of national importance to the religious and nonreligious alike. Notre Dame is fundamentally a place of worship and retains great religious importance, but its meaning has broadened. For many, it is inextricably linked with the very idea of Paris and France. Speaking to the nation shortly after the fire, President Macron said that Notre Dame "'is our history, our literature, our imagination. The place where we survived epidemics, wars, liberation. It has been the epicenter of our lives.'"

While setting aside the findings of the Court of appeals, Justice Alito, speaking for the majority said:

"The cross is undoubtedly a Christian symbol, but that fact should not blind us to everything else that the Bladensburg Cross has come to represent. For some, that monument is a symbolic resting place for ancestors who never returned home. For others, it is a place for the community to gather and honor all veterans and their sacrifices for our Nation. For others still, it is a historical landmark. For many of these people, destroying or defacing the Cross that has stood undisturbed for nearly a century would not be neutral and would not further the ideals of respect and tolerance embodied in the First Amendment. For all these reasons, the Cross does not offend the Constitution."