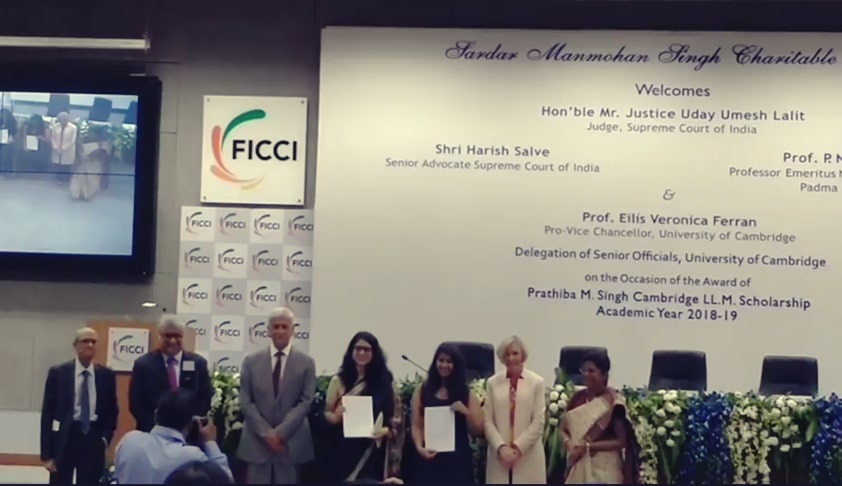 Supreme Court judge, Justice UU Lalit on Sunday termed "gyan daan" (gift of knowledge) as the best gift one can give to humankind and hailed the philanthropic efforts of a trust run by a couple—Delhi High Court judge, Justice Pratibha M. Singh and her husband Maninder Singh, Additional Solicitor General (ASG) for India.

"I must confess first, I have known Maninder and Pratibha for many years but I was never aware of this part of their persona that they have instituted this scholarship till very recently… What a wonderful gesture this couple has bestowed upon the entire legal fraternity and community," Justice Lalit said.

The judge was speaking at the event organized for the "Pratibha M. Singh Cambridge LL.M Scholarship”, instituted in the memory of Mr. Singh's father, Manmohan Singh. The scholarship this year was granted to Aadya Chawla from National Law University, Delhi, and Nupur Raut from National Law School of India University, Bangalore, under the banner of the Manmohan Singh Charitable Trust.

"In our Indian ethos, it is considered that gyan daan is the best possible gift that a man can give to anybody,” he then said, while also reiterating Mr. Singh’s words when he said, “the cycle must continue” for inter-generational equity.

Also present at the occasion was Senior Advocate Harish Salve, who said that the selected students are about to receive not just education but an “experience in learning”. He explained that learning is always a “work in progress” in all professions.

He also shared his own experiences of having worked outside his comfort zone, i.e. India, and said that students should learn that it is extremely important to be open to ideas. He further shared the advice that he received from his guru and noted jurist late Nani Palkhivala, who told him to be his own worst critic.

He recalled that Mr. Palkhivala asked him to reflect over his court arguments after every appearance and ask himself if anybody else in the world could have done a better job. He then said that if the answer to the question is yes, then he should know that he has not been good enough.

“Don’t be intimidated by what others think of you. Don’t be intimidated by the academic results of those who do better than you. Ask yourself at the end of every trial, could anybody have done better than this, and if the answer is yes, you have a gap to cover. If the answer is no, smile. That is how life should be,” Mr. Salve explained, adding, “I have tried to live to Mr Palkhivala's dream. It has been a big help to being somewhat successful in life.”