High Courts Weekly Round- Up 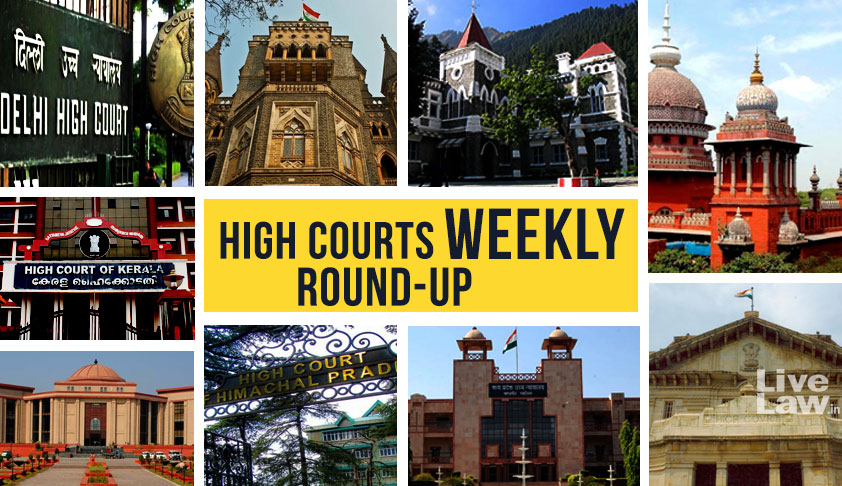 Allahabad high courtThe Allahabad High Court on Thursday acquitted Rajesh and Nupur Talwar in the 2008 Aarushi-Hemraj double murder case. A bench of Justice BK Narayana and AK Mishra granted the Talwar couple benefit of doubt while pointing out various loopholes in the probe conducted in the double murder which has seen numerous conspiracy theories from the start when Aarushi Talwar was...

The Allahabad High Court on Thursday acquitted Rajesh and Nupur Talwar in the 2008 Aarushi-Hemraj double murder case. A bench of Justice BK Narayana and AK Mishra granted the Talwar couple benefit of doubt while pointing out various loopholes in the probe conducted in the double murder which has seen numerous conspiracy theories from the start when Aarushi Talwar was found murdered in her bedroom on May 16, 2008.

The Bombay High Court quashed and set aside an order of a family court in Sholapur wherein an application filed by X seeking enhancement of compensation for herself and her son was rejected and her ex-husband’s (respondent) application seeking cancellation of maintenance was allowed.

Allowing a petition seeking enhancement of maintenance amount, the High Court relied upon the judgment of the Supreme Court in the case of Manish Jain vs Akanksha Jain and doubled the amount holding that the respondent husband made every attempt to conceal his income in order to avoid paying maintenance for his two children and their mother.

The Court recently imposed ₹5 lakh cost on petitioners reminding them about the limitations of a review jurisdiction. A bench of Justice SC Dharmadhikari and Justice MS Sonak observed that it is being seen lately that litigants try to go behind binding orders of the high court by canvassing arguments before the Supreme Court that do not give the entire or true picture of the case, and all this is done taking advantage of the liberty granted by the Supreme Court to file a review.

In a highly significant judgment, the Goa bench of the High Court struck down a notification of the Ministry of Environment and Forests dated August 10, 2017, wherein all matters relating to the State of Goa, Daman, Diu, Dadra and Nagar Haveli, before the National Green Tribunal, Western Zone in Pune, were transferred to the principal bench in New Delhi.

The High Court dismissed a petition filed by a rape victim’s father seeking medical termination of a 27-week-old foetus after a panel of 8 doctors from KEM Hospital in Mumbai recommended that the victim should be directed to continue with the pregnancy.

The High Court observed on Thursday that there was no application of mind in the changes brought about by the state government to Manodhairya Scheme in August this year.

The Chhattisgarh High Court observed that experience and seniority of an advocate will be counted from the date of enrollment with the State Bar Council and not from the date of becoming member of a particular Bar Association.

The Delhi High Court on Thursday set aside the disciplinary action taken by the Jawaharlal Nehru University(JNU) against 15 of its students, including former JNUSU president Kanhaiya Kumar, for allegedly raising anti-national slogans on the campus on February 9 last year.

The High Court issued notice to the Union of India on a public interest litigation for removal of loudspeakers from all religious structures on the ground that their use is an encroachment on a person’s “right to be left alone and spatial control” and thus violates the newly recognised fundamental right to privacy.

The Gujarat High Court in the ‘Godhra’ Judgment held that the state Government had failed in its duty to maintain law and order in the state during the period of Godhra incident.

The High Court, on Monday, commuted to life imprisonment the death sentence awarded to 11 convicts in the case of the burning of Sabarmati Express in Godhra in 2002, which had triggered massive communal riots across the State of Gujarat, claiming the lives of more than 1,000 people.

A Division Bench of Kerala High Court on Friday observed that Educational Institutions are meant for imparting education and not politics.

A Division Bench of Kerala High Court issued notice to Opposition Leader Ramesh Chennithala on a PIL filed by a lawyer against the call of hartal on October 16.

The Madras High Court recently held that the Fundamental Right to hold public meetings cannot be denied merely on the apprehension of a law and order situation arising.

The Punjab & Haryana High court passed an order restricting the bursting of firecrackers to three hours In Punjab, Haryana, Chandigarh On Diwali Day