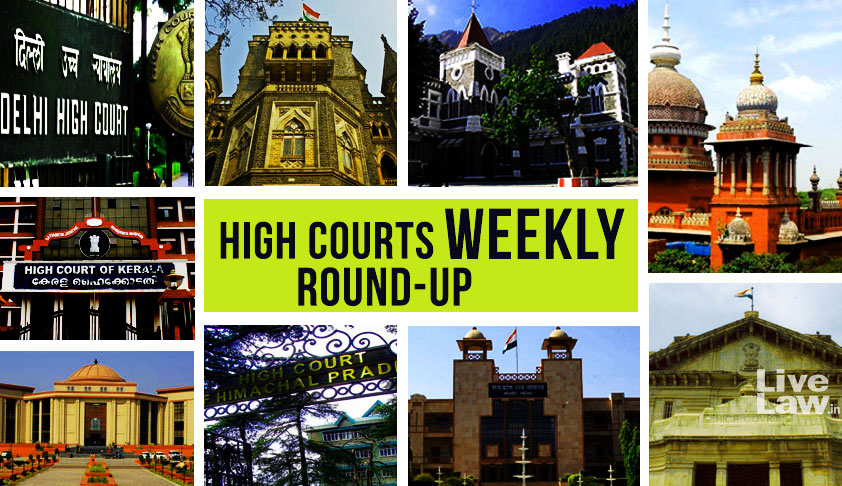 Aurangabad Bench of the Bombay High Court recently ruled that charging people under Section 295 (deliberate and malicious acts intended to outrage religious feelings of any class by insulting its religion or religious beliefs) of the Indian Penal Code merely for questioning superstition and traditional authority violates Articles 14 and 19 of the Constitution of India.

Asserting that absence of humour has led to the deterioration in tolerance levels in the country, Aurangabad Bench of the High Court recently set aside an FIR filed against five people for allegedly having hurt sentiments of those following the Hindu religion.

The High Court recently refused to attach the negatives of the iconic film Sholay in an execution application filed by Shree Navchitra Distributors Pvt Ltd in a suit against Sippy Films.

The High Court on Monday took stern view of more than 160 illegal constructions which have cropped up in various coastal villages of Alibaug, and directed the Divisional Commissioner, Konkan Division to ascertain the action that has been initiated against such constructions.

In an 83-page judgment, the High Court on Tuesday passed several landmark directions for protection of mangroves all over Maharashtra. The division bench of Justice AS Oka and RI Chagla held that there can be no construction activity within 50 m of any mangroves area as all mangrove land will fall in Coastal Regulation Zone-I category as per both the CRZ notifications of 1991 and 2011.

The High Court recently held that if illegal structures are demolished after following due process of law, then there cannot be a violation of rights under Article 300-A of the Constitution.

The infamous fraternity of fraudsters and counterfeit drug manufacturers must get the message loud and clear that the courts will deal with them sternly and uphold the rights of hapless consumers who are made victims of the nefarious activities of such unethical drug manufacturers, said the Bombay High Court in an order passed earlier this month.

A division bench of Calcutta High Court delivered a split verdict over the issue of whether a Registrar under The West Bengal Societies Registration Act, 1961 can cancel the registration of a society.

The Chhattisgarh High Court observed that stay of execution of decree pending suit between decree-holder and judgment-debtor shall be granted only in exceptional and extraordinary cases.

The Delhi High Court last week issued notice on a PIL demanding that sign language be recognized as an official language of India and be incorporated into the Eighth Schedule of the Indian Constitution.

The High Court on Monday upheld the life imprisonment awarded to a convict for committing aggravated penetrative sexual assault on a 6-year-old boy. The Bench comprising Justice S. Muralidhar and Justice Vinod Goel further enhanced the compensation awarded to the minor victim to Rs. 5 lakhs and directed that the additional sum be paid to him under the Victim Compensation Scheme within eight weeks.

The High Court on Wednesday issued notice to the Centre, the Delhi Government, the Chief Passport Officer and Sushil Ansal, a real estate tycoon and a convict in the 1997 Uphaar fire tragedy case, on an petition filed by the Association of the Victims of Uphaar Tragedy (AVUT) seeking an inquiry into purported connivance between Sushil Ansal and the passport authorities due to which the latter was issued passport without him applying for the mandatory No-Objection Certificate (NOC) before any criminal court where cases against him have been pending for over 21 years.

The High Court asked the Indian Film and Television Producer Council (IFTPC) and the Indian Motion Pictures Producers’ Association (IMPPA) to consider if any guidelines could be framed in regard to competing film titles registered with them to avoid future conflicts between producers over titles of the film.

The High Court directed the AAP government to “forthwith” appoint 10 contract teachers to vacant posts in a school here for visually impaired boys and provide the students with “assistive devices” like audio recorders to help them study.

The Madhya Pradesh High Court upheld total prohibition of plastic carry bags in the state. The bench of Chief Justice Hemant Gupta and Justice Vijay Kumar Shukla dismissed writ petitions challenging the total prohibition brought vide Madhya Pradesh Jaiv Anaashya Apashishta (Niyantran) Sanshodhan Adhiniyam, 2017, contending that it is repugnant to the Central Rules which permits carry bags made of virgin or recycled plastic of not less than 50 microns in thickness.

The Gwalior Bench of the High Court on Wednesday directed the State to remove tiles with pictures of Prime Minister Narendra Modi and Chief Minister Shivraj Singh Chouhan from houses built under the Pradhan Mantri Awas Yojana (PMAY).

The High court held that a person cannot be barred from enrolling as a lawyer merely for being an accused in a criminal case for offences where guilt is yet to be proved.

The High Court issued a notice to Facebook, Twitter, YouTube, WhatsApp and Google after it came to know during the hearing of a petition that social media companies do not provide details in case of commission of any cyber crime.

The Sikkim High Court upheld an order of magistrate that ‘quashed’ a complaint against police officers for want of sanction, by interpreting it as an order of discharge.

The Tripura High Court recently acquitted a man accused of attempting to commit rape charges observing that it is, at best, a case of “fondling” and the offence does not fall within the scope of Section 376 IPC but it will fall within Section 354 IPC.

The Uttarakhand High Court declared that provision for anticipatory bail under Section 438 of the Code of Criminal is applicable in the State of Uttarakhand.

The High Court ordered all illegal slaughter houses running in the state to be sealed within 72 hours. A bench of Acting Chief Justice Rajiv Sharma and Justice Manoj Kumar Tiwari directed the state to ensure that no animals are slaughtered in open in public gaze.