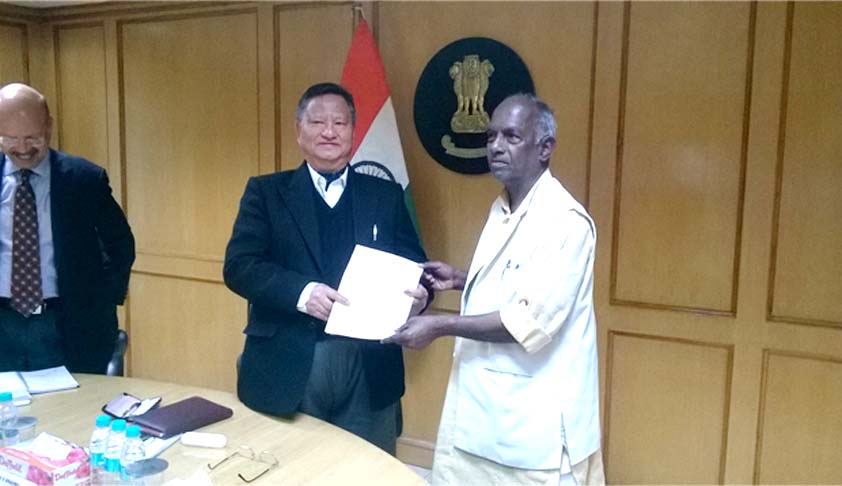 Another interesting legal issue has come up before the Election Commission in the light of large-scale internet advertisement issued by BJP in the current election to Delhi Legislative Assembly. The advertisements have been questioned by former RSS ideologue, and presently Convenor of Save Democracy Front Sh.KN Govindcharya, who today met the Chief Election Commissioner of India Mr. HS Brahma and handed over a representation alleging violation of poll code done by BJP by advertising on the internet, within 48 hours of the polling day.

He has highlighted how soliciting votes over the internet, which being a poll code violation is influencing the voters on the voting day.  According to him “as per Section 126 (1) (b) of the Representation of People Act, no person shall display to the public any election matter by means of cinematograph, television or other similar apparatus in any polling area during the period of forty-eight hours ending with the hour fixed for the conclusion of the poll for any election in the polling area.”

Earlier, following Govindacharya’s representation, the Election Commission of India had also released a notification regarding applicability of Election laws over the internet in October 2013. In the same, the Commission had said, “It is clarified that the provisions of model code of conduct and related instructions of the Commission issued from time to time shall also apply to the content being posted on the internet, including social media websites, by candidates and political parties.”

According to Sh. Govindacharya the advertisements by BJP have appeared in e-papers of newspapers, which is a gross violation of Election Commission guidelines. He has also quoted the judgement in KamarLal Gupta Vs. Amar NathChawala(AIR 1975 SC 308).

Sri KN Govindcharya had also filed a Public Interest Petition in Delhi High Court regarding evasion of taxes by foreign internet companies and the illegal use of private email networks and social media by the Government. The High Court in the same matter had then ordered for the appointment of Grievance Officers and the petition has resulted in formation of the government’s email policy. Regarding the non-payment of taxes.