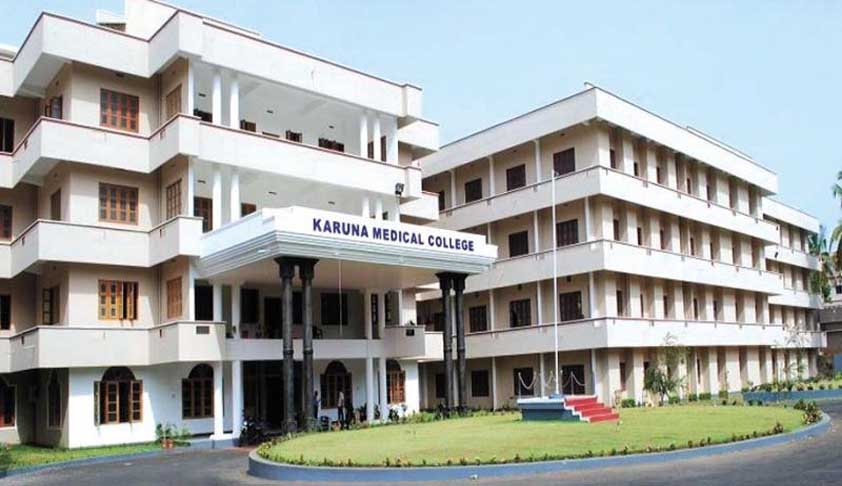 The High Court of Kerala, through Justice Devan Ramachandran, in a recent case has held that the jurisdiction vested / exercised by the Admission Supervisory Committee (hereinafter referred to as ASC) is intended exclusively to operate in favour of students.The court further noted that even where violations or transgressions occurred as a result of act committed by agencies of government,...

The High Court of Kerala, through Justice Devan Ramachandran, in a recent case has held that the jurisdiction vested / exercised by the Admission Supervisory Committee (hereinafter referred to as ASC) is intended exclusively to operate in favour of students.

The court further noted that even where violations or transgressions occurred as a result of act committed by agencies of government, the jurisdiction of admission supervisory committee to examine the same cannot be curtailed.

The ASC was set up by Kerala state to scrutinise the admission procedure adopted by colleges in private self-financing sector.

The petitioner herein, Karuna Medical College, fixed tuition fees towards the course leading to MBBS degree @ Rs. 1,30,000 for the year 2007-08.

This was done pursuant to the decision arrived at the meeting of fee regulatory committee.

Subsequently, the petitioner entered into an agreement with the government to fix the tuition fee for students from the list forwarded by the Commissioner for Entrance Examinations (hereinafter referred as CEE), admitted to government seats @ Rs. 20,000 and caution deposit @ Rs. 2,50,000, respectively. The CEE forwarded a demand draft for Rs. 41,63,200 towards the fees to be collected from students from government seats.

This, according to the petitioner, necessitated them to collect fees @ Rs. 1,30,000 from all students, irrespective of government quota.

Certain students approached the ASC contending that they have been overcharged @ Rs. 1.30 lakh instead of Rs. 20,000.

The ASC directed to refund the excess amount collected from the students with interest @ 12 per cent and imposed a maximum penalty of Rs. 10 lakh on the college for flouting its orders.

The petitioner college then approached the high court, mainly on two counts: (i) The ADC does not have jurisdiction to pass such an order;

(ii) The petitioner collected the fee as per direction and on behalf of CEE and, hence, it cannot be directed to refund the same nor be imposed with costs.

Rejecting the contentions put forth by the petitioner, the high court ruled that the jurisdiction vested / exercised by the ADC is intended exclusively to operate in favour of students.

Justice Devan Ramachandran opined: “I have no doubt that the jurisdiction vested in the Admission Supervisory Committee is intended exclusively to operate in favour of the students who approach it with a complaint against the admission process. The cause for such complaint being that the process is not fair or transparent or merit based and that it is exploitative, it would not matter at all, as far as the student is concerned, that such process was handled by the CEE or by the Management. Either way, if a complaint of such nature is made, the Admission advisory Committee would be obligated, by the terms of the Act, to examine it notwithstanding the violations which led to such exploitative admission processes being committed by the CEE or by the Management. It is the complaint of the student that is important and not the agency or the person who has committed the violation. The Admission Supervisory Committee being a statutory body, completely autonomous in its operational field, cannot be constrained in its jurisdiction even in cases where the Government or its agencies commit violations in admission processes relating to private self financing colleges. When there is such a violation or transgression, so as to vitiate the process of admission, even if committed by the agencies of the Government, the students can only approach the Admission Supervisory Committee under the provisions of Act when they feel that the process of admission has not been non-exploitative.”

Regarding the contention of petitioner on juggling of responsibility towards collection of excess fee between the college and CEE, the court noted that the rights of students are to be maintained in a fair and transparent manner.

The court, thereafter, disposed of the matter directing the petitioner to refund the excess amount collected from the students within 30 days.