Anti-Defection Law : What Amounts To Voluntary Giving Up Of Party Membership Under Tenth Schedule Of Constitution? 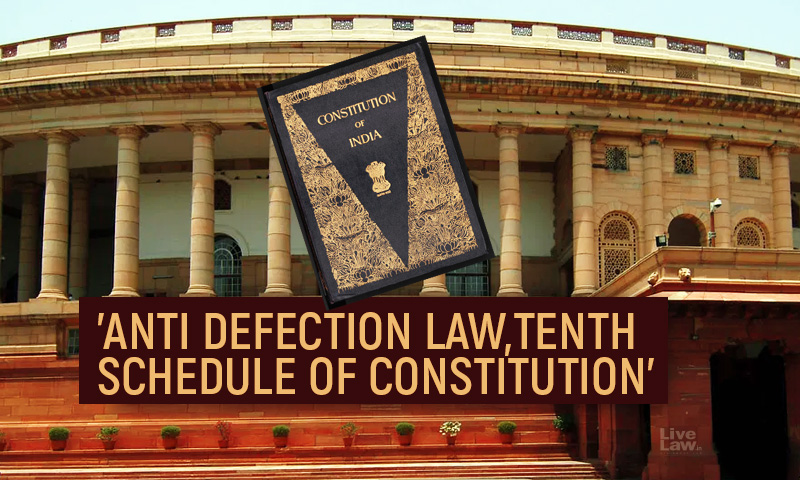 Anti-defection law under the Tenth Schedule of the Constitution has once again come to the fore with the political crisis that has rocked Rajasthan in the wake of the rebellion led by a camp of Congress MLAs led by Sachin Pilot.The issue has now reached the High Court of Rajasthan, after the Pilot camp approached it challenging the disqualification notices issued by the Speaker.The...

Anti-defection law under the Tenth Schedule of the Constitution has once again come to the fore with the political crisis that has rocked Rajasthan in the wake of the rebellion led by a camp of Congress MLAs led by Sachin Pilot.

The issue has now reached the High Court of Rajasthan, after the Pilot camp approached it challenging the disqualification notices issued by the Speaker.

The Speaker's show-cause notice is premised on the ground that refusal to attend party meetings as per the directives of the party whip amounts to anti-party activities, attracting defection under Tenth Schedule.

Pilot and 18 other dissident MLAs have argued before the Court that their actions cannot be construed as giving up of membership of the party.

In this backdrop, this piece attempts to examine the ambit of "voluntarily given up his membership" of party as stated in Paragraph 2(1)(a) of the Tenth Schedule of the Constitution, as explained by judicial decisions.

Clause (2) of Article 191 states, "A person shall be disqualified for being a member of the Legislative Assembly or Legislative council of a state, if he is so disqualified under the Tenth schedule"

Tenth schedule and the condition, "voluntarily giving up his membership".

The statement and Reasons elaborated in the Constitution (Fifty- second Amendment) Act, 1985, which realised the tenth schedule in the constitution, states the following words:

"The evil of political defections has been a matter of national concern. If it is not combated, it is likely to undermine the very foundations of our democracy and the principles which sustain it. With this object, an assurance was given in the Address by the President to Parliament that the Government intended to introduce in the current session of Parliament an anti-defection Bill. This Bill is meant for outlawing defection and fulfilling the above assurance. "

The Tenth Schedule of the Constitution was added with effect from 01/03/1985 and it provides 'provisions as to disqualification on ground of defection'.a

Paragraph 2 of the tenth schedule provides two explanations related to the disqualification on the ground of defection. The first explanation is that, "if he has voluntarily given up his membership of such political party". The political party referred here is such party from which the member contested for the purpose of election and became a member of the house.

The underlying object and the purpose which the Tenth Schedule seeks to achieve were explained as under in Kihoto Hollohan v. Zachillhu and Others, 1992 SCC Supl.(2) 651:

"Voluntarily giving up his membership" not synonymous with resignation.

In G. Viswanathan & Ors. v. Hon'ble Speaker Tamil Nadu Legislative Assembly & Ors. 1996 SCC (2) 353, the Court observed that the act of giving up membership can be either "express or implied".

Mahachandra Prasad Singh v. Bihar Legislative Council, (2004) 8 SCC 747 , the Supreme Court observed that contesting Parliamentary election on a ticket of party which is different from the party under which he became a member of state legislative assembly amounted to giving up membership.

"In the present case, the Chairman of the Legislative Council has held that the petitioner had been elected to the Legislative Council on the ticket of the Indian National Congress but he contested the parliamentary election as an independent candidate. On these facts a conclusion has been drawn that he has given up his membership of Indian National Congress. This being a matter of record, the petitioner could not possibly dispute them, and that is why he has admitted these facts in the writ petition as well. In such a situation there can be no escape from the conclusion that the petitioner has incurred the disqualification under paragraph 2(1)(a) of the Schedule and the decision of the Chairman is perfectly correct." , the Court observed.

The burden of proving that there was no intention to give up membership is on the legislator against whom disqualification proceedings have been initiated.

In R.S Naik (Supra), the SC observed that, "In the present case Naik has not disputed that he has given up his membership of his original political party but he has claimed that there has been a split in the said party. The burden, therefore, lay on Naik to prove that the alleged split satisfies the requirements of paragraph 3. The said requirements are:

(i) The member of a House should make a claim that he and other members of his legislature party constitute the group representing a faction which has arisen as a result of a split in his original party; and

Power of the Speaker to decide.

The Speaker has to decide the question of disqualification with reference to the date on which the member voluntarily gives up his membership or defies the whip. The decision of the speaker must be in consonance with the basic conduct or actions taken by the member, which may amount to voluntarily giving up his membership. This position of law was reiterated in a recent decision of the apex court in Ram Chandra Prasad Singh v. Sharad Yadav which was decided on 19th March of 2020. The Court observed that :

In Shrimanth Balasaheb Patil Vs. Hon'ble Speaker Karnataka Legislative Assembly and Others, (2019) 15 Scale 533, the apex court had considered the law laid under paragraph 2 of the tenth schedule. The Court had laid down the following :

In addition to the above, the decision of the Speaker that a member is disqualified, relates back to the date of the disqualifying action complained of. The power of the Speaker to decide upon a disqualification petition was dealt by a Constitution Bench of this Court in Rajendra Singh Rana v. Swami Prasad Maurya, (2007) 4 SCC 270. This Court, reading the provisions of paragraphs 2 and 6 of the Tenth Schedule, has clearly held that the Speaker has to decide the question of disqualification with reference to the date it was incurred.

The observation of the Court in Rajendra Singh Rana (Supra) is :

Similarly, the fact that the party could condone the defiance of a whip within 15 days or that the Speaker takes the decision only thereafter in those cases, cannot also pitch the time of disqualification as anything other than the point at which the whip is defied. Therefore in the background of the object sought to be achieved by the Fifty-second Amendment of the Constitution and on a true understanding of para 2 of the Tenth Schedule, with reference to the other paragraphs of the Tenth Schedule, the position that emerges is that the Speaker has to decide the question of disqualification with reference to the date on which the member voluntarily gives up his membership or defies the whip.

As per the recent decision of the SC in Keisham Meghachandra Singh v The Hon'ble Speaker Manipur Legislative Assembly and others, the Speaker has to endeavour to decide the disqualification petition within a period of 3 months.