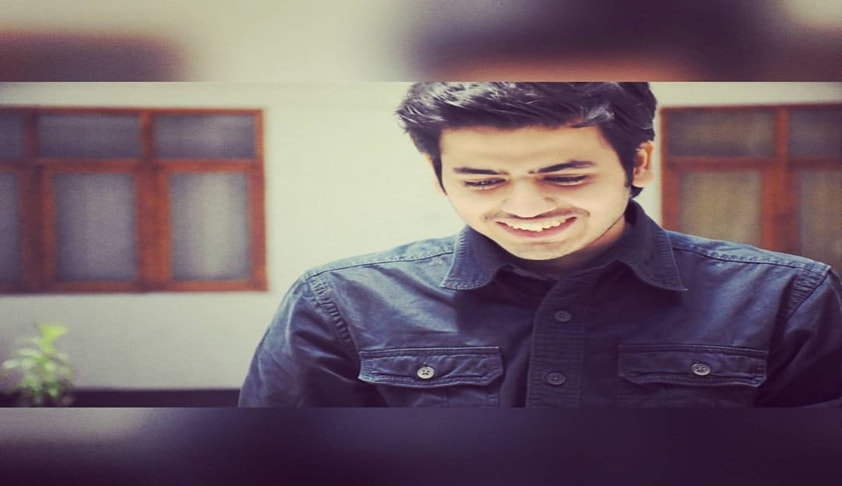 Setting an example of the power of legal aid in ensuring justice for all, a fifth-year law student from Lucknow has charged a token fee of just Re 1 to represent a senior citizen before a consumer forum in Jaipur, Rajasthan, in a legal battle drawn over two years and got him compensated too.

Chanakya Sharma, a student of Dr. Ram Manohar Lohiya National Law University, Lucknow, Uttar Pradesh, represented Radheshyam Gupta, a retired government servant in a case against Unit Trust of India wherein he had invested his money with the hope of getting good returns by the time his granddaughter is of marriageable age but the scheme was foreclosed while Radheshyam kept waiting.

Chankaya is a native of Jaipur and Radheshyam is his neighbour.

Two years ago, when Chanakya was visiting his parents at his hometown, the hapless neighbour discussed his plight with him and how advocates were quoting random amount as fee.

In the year 2000, UTI foreclosed the scheme. The move was challenged before various high courts by various persons only to be upheld in the interests of the investors.

It was Radheshyam’s case that he never received any intimation about the foreclosure and when he went to withdraw money in 2015, UTI told him that the scheme was closed in the year 2000 itself and the amount that he was entitled to get was a meagre Rs 13,100 approximately, besides an interest of Rs 4,323.

“This landed Mr. Radheyshyam in a tizzy since the money he had saved for his granddaughter's marriage was now only a paltry sum. I was visiting my parents when he shared the details with me. I have been providing legal aid and decided to take the case up. When I served UTI a legal notice, they said all letters sent to Radheshyam returned undelivered,” says Chankaya, a U.P. State Legal Services Authority certified volunteer of Legal Aid Clinic at his varsity.

In his third year of law then, Chanakya moved the District Consumer Forum in Jaipur by putting to use the ‘Consumer Protection (Procedure for regulation of allowing appearance of Agents or representatives or Non-Advocates or Voluntary Organisations before the Consumer Forum), Regulations, 2014’ which allows non-advocates to appear before the consumer forum.

Once before the forum, UTI stated that at the time of foreclosure, it had asked all investors to exercise any of the two options —to opt out of the scheme and redeem the money invested as on date or to get it converted into Assured Return Scheme bonds with an interest rate of 6.60 per cent. Since Radheshyam failed to exercise any of the two options, his money was by default converted into ARS bonds. The ARS bonds matured in 2009.

The UTI told the commission that it had tried to communicate with Radheshyam in the year 2009 also as Rs 13,100 as sum at maturity was lying with them but all letters returned undelivered.

At this, Chankya argued that “even though the money was rightly employed in ARS Bonds since Mr. Radheyshyam had not communicated his choice, he is entitled to return on his money for the entire time for which money remained with UTI, after maturity of Bonds till date since he was given no notice”.

The case went on for two long years and Chanakya used to be there on every hearing.

“I visit my family in Jaipur every month or within two months and after this case, I used to plead for dates which coincided with my travel plans or plan as per the date of hearing,” said Chanakya.

Besides this, the forum has also awarded him a compensation of Rs 5,000 for the mental agony and Rs 2,500 as litigation expenses.

Chankya said the decision has brought him immense satisfaction and is also an example of how legal aid can be provided to all in need.

He emphasized on law students were making good use of their education by coming to aid of people in need of justice.

How 2014 regulations came to aid

Chankaya said he has been able to do a lot by making use of the ‘Consumer Protection (Procedure for regulation of allowing appearance of Agents or representatives or Non-Advocates or Voluntary Organisations before the Consumer Forum), Regulations, 2014’ which allows non-advocates to appear before the consumer forum.

“Not many people know that these regulations give sufficient power to non-advocates to appear for anyone who needs legal assistance. I think, there could not be a better provision for law students to give effect to and to come to the rescue of those who need legal help,” he said.

By putting these guidelines to his use, Chanakya satisfied the forum in Jaipur that he was well-versed with the facts of the case and was allowed to appear for Radheshyam.

This, however, is not the first case where Chanakya has put these guidelines to use.

In 2017, Chankya had successfully challenged the illegal practice of restaurants in Goa charging merchant discount rate on card payments.

Since it was not easy for him to travel to Goa on every hearing before the consumer forum, he got in touch with another legal aid group of a varsity in Goa and conferred power of attorney on a legal aid volunteer there to represent his case.